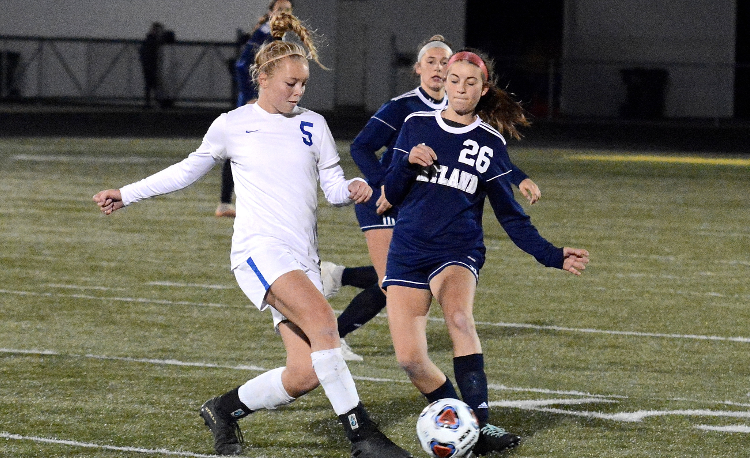 CLYDE—Liberty-Benton scored two goals in a nine-minute span of the first half then held off Kirtland the rest of the way for a 2-1 win in a Division III state semifinal at Bob Bishop Stadium on Tuesday.

With the loss, Kirtland bows out of the state playoffs and concluded its season with a 17-5 record.

“It wasn’t something we weren’t expecting but it’s one thing to talk about team speed and it’s another to actually see it,” Kirtland coach Ed Bradac said. “We got pulled out of the center too much but at halftime, it was just 2-1, so it wasn’t insurmountable. They did some things to preserve that 2-1 win but sometimes it’s a game of luck too, and we’ve been on the other side of that in the past couple of years as well.”

Leah LaVerde gave Kirtland an early 1-0 lead when she was in the right place at the right time to finish off a Maya Zovko header off a corner kick with 28:32 remaining in the opening half.

That lead was short-lived as the Eagles scored the equalizer two minutes later off a tap-in of a loose ball in front of the net.

Olivia Bodie broke free down the right sideline and delivered a beautiful cross to Maya Rickle, who scored her second goal of the night for a lead the Eagles would not relinquish.

Bodie and Rickle also teamed up on Liberty-Benton’s first goal.

That 2-1 halftime lead allowed Liberty-Benton to beef up their presence on the defensive third, which was needed to fend off Kirtland’s furious attack in the final 40 minutes.

“We had multiple opportunities to even that game,” Bradac said. “There were just two moments in that game, and they were pretty quick, that we just weren’t able to keep up with them.”

“The first place my mind goes is to the seniors, that class and what those girls have done for our program,” Bradac said. “This is a group of girls that finished 65-17-5. You’re only guaranteed 17 games per year so they really should have only played 68 games in their career and we played 87 games. That’s an amazing number.”

“I don’t know how many programs can even lay claim to that,” Bradac said. “We battled all year long and then we came up against a Liberty-Benton team which we knew we would be good. We saw it in 2017, a 2-1 game that was close.”

Zovko was especially instrumental in that run as she closed out her career with the second-most points in school history (146) on 44 goals, the third-most in school history, and a school-best 57 assists. Rodin finished with 29 goals and 35 assists, good for a spot in the top five in both categories.