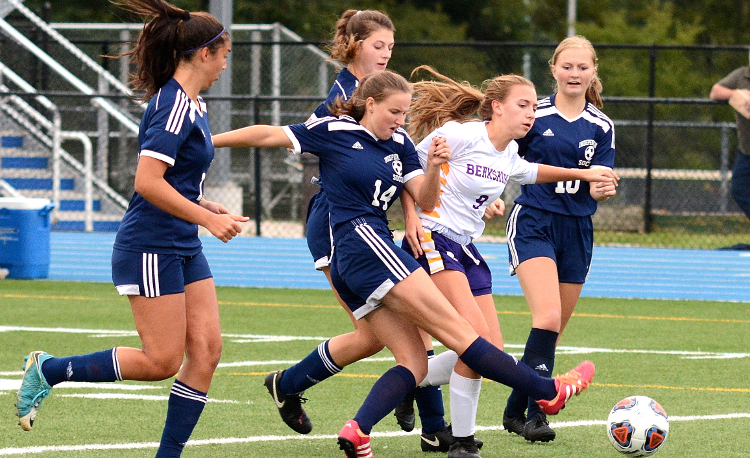 With 10 returning starters from a team that won 10 games last season, the Independence girls’ soccer team has the potential to make some noise in the revamped Chagrin Valley Conference and also make a deep run in the postseason.

To do that, the Blue Devils will have to play together and focus on teamwork rather than individual accolades.

“We have a strong group of juniors and seniors that have been building together for two years,” Independence coach Bryan Less said. “We could win over 10 games against what is probably the strongest schedule I have ever put together. A conference title is also possible if we work and play as one unit.”

Among the 10 returning starters are six players who earned All-CVC honors last fall.

DiGeronimo, a midfielder and the team’s MVP, and Westerburg, a forward, tied for the team lead with eight goals scored. DiGeronimo added nine assists while Westerburg assisted on three goals.

“Riccela is a very strong all-around player. She has very good touch, passing, a strong shot, and is aggressive on defense. When she is on, she is able to be a game-changing player,” Less said. “Paige has very good speed and an exceptional work rate. She has steadily improved her individual skill and shot power, so I expect to see an improvement in her finishing this season.”

Kaiser recorded 111 saves and eight shutouts in goal for the Blue Devils last fall on the way to being named first-team All-Greater Cleveland. Dougherty scored seven goals and added five assists from her midfield position.

“Despite her short stature, Reni has become an outstanding keeper. Her athletic ability and skills in other sports allow her to make diving saves that my past keepers would struggle with. She could also start for the team in the field, so her foot skills are an asset when passing back to her,” Less said. “Molly has one of the strongest shots of any player I have coached, turning her into a very dangerous free-kick artist. Her field vision and playmaking are also a thing to watch.”

Belitz, a defender, scored one goal but really proved valuable on the backend. For her efforts, she was named the team’s Defensive MVP.

“Rachel has turned herself into a superb defender,” Less said. “Her speed and aggressive play stop countless attacks from occurring. She is also able to win balls in the air. Her background as an offensive player also gives her the ability to start the offensive attack from the defense.”

Adams, a forward, scored four goals and added an assist during her freshman season. She earned the team’s Rookie of the Year award.

“Alex has spent her entire youth playing defense, so moving to offense was a new experience,” Less said. “She has put a ton of offseason work into her shot and it definitely shows. She could become one of the better players I have coached.”

Senior Marisa Silvestro will join Westerburg and Adams at the forward position. She scored two goals and added a pair of assists last season despite missing several games due to injury.

“I am looking forward to her speed being a major factor for us this season,” Less said of Silvestro. “She also is one of our most aggressive players, despite being one of the smallest.”

“Makenna is one of my favorite players to watch,” Less said. “She has some of the best individual skill (sets) of any player I have coached. When she has time, she sees plays developing and is able to make passes most others do not even see.”

Seniors Erin Zygmunt and Heather Patacca are slotted to start on defense.

“Erin has grown into becoming a physical force. She is not afraid to knock players off the ball. She also helps us by winning balls on defense and using her individual skill to lead the offensive attack,” Less said. “Heather is a very aggressive player. When she plays under control, she is able to shut down key players on the opposing team.”

The pieces are in place for the Blue Devils to achieve their goals but, ironically, for that to happen each player must improve on finishing at the net.

“First, we must increase our overall team fitness,” Less said. “We also need to utilize the talent we have in the best possible way. This team has excellent skill, so we must combine passes and work towards more creativity. Our only problem last year was finishing; we just shot too much at the keeper.”

Already, the upperclassmen have embraced their role as leaders of the team. That should help the Blue Devils come together and peak at the time.

“We have a lot of strong personalities on this team, so we must remain a cohesive group,” Less said. “The veterans have already shown a willingness to help new players, so that shows that we are willing to be one team. The individual players must also be willing to sacrifice individual goals for team success. Some players may be in roles that are new, but they must accept these roles for the good of the team.”