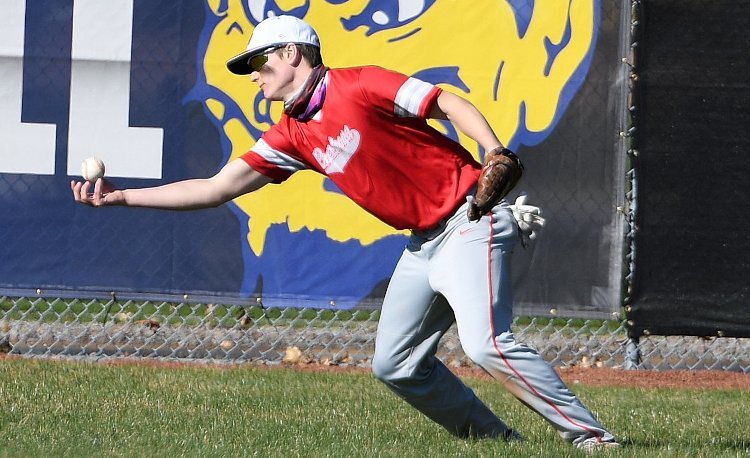 Despite the graduation of eight seniors from last season and a coaching change, expectations around the Cuyahoga Heights baseball program haven’t changed.

New head coach Matt Streicher will make a seamless transition as he served as the team’s assistant coach for the past nine years.

“This upcoming season has a similar feeling to last year with a lot of excitement, but many unknowns based on the number of new varsity players we will have this year,” Streicher said. “After graduating eight seniors who helped lead us to a district runner-up finish last season, there will be many new faces on the diamond this year. The boys have been working hard this preseason and have the expectations to continue the strong tradition of Cuyahoga Heights baseball that has been established over the past few decades. Similar to last season, I think there may be some early growing pains as many new players get used to playing baseball at the varsity level, but we hope to speed up the learning curve and play our best baseball come May.”

Last spring, Heights finished 13-11 overall and 7-5 in the Chagrin Valley Conference Metro Division. The team went on to win a sectional title and finished as the Division IV Medina District runner-up.

With just three returning starters, Streicher and his squad will face many challenges this spring.

“I feel like our inexperience early on will definitely be a challenge, but just like every other team, the only way to overcome that is through playing games and logging innings on the mound and getting live at-bats,” Streicher said. “We have to find a way to replace our top two pitchers and top six hitters, which will be no small task. Hopefully, with our preseason work and our kids’ ability to continue to improve every day, we will hit the ground running and get better throughout the season. We are bound to encounter some adversity during the season. How the kids respond to that will play a large role in how successful we can be. We need to not worry about the past and focus on the next pitch or next at-bat or next play in the field.”

With that next-pitch mentality in mind, Streicher is focused on his team’s strengths.

“We return three lettermen to our squad this season, who will hopefully help navigate us through the early portion of the season. A handful of others got some spot playing time and a taste of varsity baseball, so they at least got to be a part of the success at the end of last season, despite not playing much,” he said. “Like last year, I feel as though we may need to temper our expectations early on with so many new faces in the field and on the mound, but this group has the ability to become a solid baseball team as the younger players and the team as a whole gets more experience and confidence at the varsity level. The CVC Metro Division will provide us many challenges and opportunities for growth in the early part of the season to hopefully prepare us for another postseason run.”

Senior third-baseman Andy Domzalski returns to the starting lineup and he has stepped up in the preseason to provide his younger teammates with the guidance they need to settle into the varsity lineup.

“Domzalski has been instrumental in leading us this preseason,” Streicher said. “He has taken on a leadership role to help guide our young players and he looks to finish off his high school baseball career with a strong senior season.”

Sophomore Andrew McDonald was called up to the varsity squad during the middle of last season and he will provide Heights with a capable arm on the mound and a reliable glove at shortstop.

“(He) will be one of our top pitchers and will play shortstop when he’s not on the mound,” Streicher said. “Andrew had a great freshman year, ultimately taking over the shortstop position as well as becoming our third starting pitcher. Andrew didn’t flinch last season when put into those difficult spots and handled himself extremely well.”

Junior Noah Phillips will provide depth at shortstop and also could play second base.

“He has all the tools to become a successful high school baseball player,” Streicher said. “He can be a force on the mound, a solid middle infielder, and a strong bat in our lineup.”

Junior Jacob Del Valle is projected to start in center field. The returning letter winner will lead a talented, but youthful group of outfielders.

“He can play any of the outfield positions,” Streicher said. “Jacob is a strong defender and with a year of experience at the plate under his belt, he should provide us with some quality at-bats throughout the season.”

“Andrew has really been working on his defensive play and arm strength behind the plate since last season and we are looking forward to seeing his growth continue this season,” Streicher said. “(Iacobucci) has had a solid preseason swinging the bat, so we hope to see that translate to the diamond come late March.”

Freshman Kyle Porter rounds out the projected starting lineup in the infield. He’ll start at first base.

“He is an intriguing player for us,” Streicher said. “Kyle can play many positions in the field but to start, we plan on using him at first base. Kyle has been a sponge this preseason learning the ins and outs of the position and his natural athletic ability has allowed him to earn a starting spot as a freshman. The coaching staff is excited to see what this year, and the next several years have in store for Kyle.”

Sophomores Anthony Coutouzis and Derek DiSanza are projected to start in left and right fields, respectively.

“Anthony Coutouzis was our designated pinch-runner last season. We are excited to see him take on a more significant role in our outfield. He does a great job tracking down the baseball on defense and can be a problem on the base paths with his speed,” Streicher said. “Derek DiSanza is another speedy outfielder who is continually giving a max effort on offense and defense. As mentioned with the team versatility, Derek is a solid outfielder, will be an important relief pitcher and can catch in a pinch if we need him to. We are hoping Derek can thrive near the top of our lineup by getting on base in many different ways.”

Junior Gio Iacobucci will provide Heights with another bat in the lineup as he’ll serve as the team’s designated hitter.

“Gio swings the bat better than most on our team right now and will look to establish himself as our designated hitter most games,” Streicher said. “He has the ability to play first and pitch as well, which adds to his versatility. Gio is also known for his witty remarks to help keep the mood light during our preseason practices.”

McDonald is the most experienced pitcher in the Heights rotation but Phillips and sophomore Joey White and junior Dylan Mormile will add quality depth.

“Andrew became our third starter late in the season and had a couple of quality starts to finish up the year,” Streicher said. “If (Phillips) can consistently pound the strike zone, Noah will be a solid pitcher at this level. Joey and Dylan will both probably get the opportunity to start and come out of the pen. Both are a little unorthodox in the way they pitch, so if they can find a way to throw strikes and move the ball in and out they can both be very successful.”

DiSanza, Gio Iacobucci, and Juhnke will throw in relief for Heights.

Despite the relative inexperience at the varsity level, Streicher is confident his squad will be up to the challenge this season.

“I feel like our outfield defense should be pretty solid to start the year as we have several guys who can track down the baseball. We are also a fairly versatile squad with kids who are willing and able to play multiple positions,” he said. “Compared to previous years, I feel like we have a little more team speed, which we hope to take advantage of both on the bases as well as in the field. As a new head coach, I am also blessed to have a strong coaching staff. Coach Brett Lowther will be back at Heights for his first season coaching, but his knowledge of the game and his baseball IQ is phenomenal. When Brett was in high school he was a part of our state Final Four baseball team in 2016, so he knows what it takes to be successful at this level. It also doesn’t hurt that his coaching Hall of Fame dad, Marc Lowther, occasionally shows up to provide some words of wisdom for us and the players. My father, Randy Streicher, has been coaching the JV team for the last eight years and has a great relationship with all of his players, and does an outstanding job of getting the younger guys ready to play varsity baseball so we are looking forward to seeing that again this spring.”

For Heights, the key to success this season is simple.

“In order to be successful this season, we will need to get quality starting pitching, a strong defensive effort, and timely hitting,” Streicher said. “In my years at Cuyahoga Heights as an assistant, when we have found a way to piece those three elements of the game together, the results have generally followed. If just one of those three is missing, however, it often becomes difficult to win games.”