Paugh, Schuster have their way in win over Brooklyn 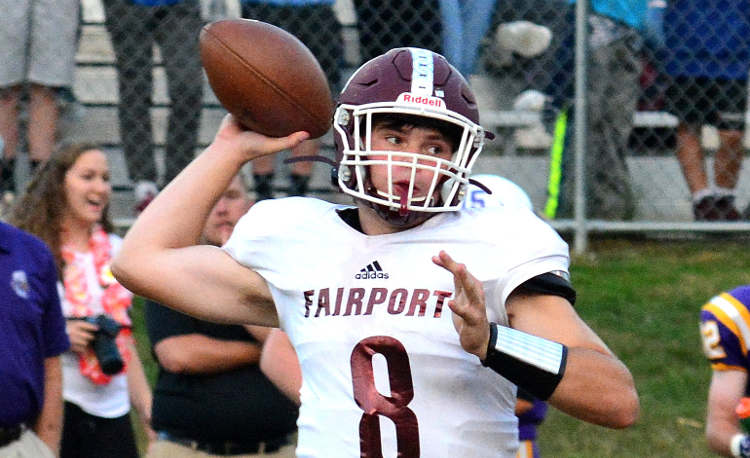 Brooklyn scored first in Friday’s Chagrin Valley Conference Metro Division contest at Fairport Harding on Friday but the Skippers dominated from there and beat the Hurricanes, 47-7.

“These kids made a statement this week,” Fairport coach Cameron Ruff said. “This was a must-win game and the kids rose to the challenge.”

The Homecoming win was the first for the Skippers in many years and they did it in impressive fashion.

“I’m most proud of our kids’ focus during their homecoming game and their response to Brooklyn going up 7-0 in the first quarter,” Ruff said. “Rather than become upset with each other after giving up a long score, they regrouped, communicated, and played their best football by scoring 47 unanswered points.”

Jamiar Tate opened the scoring with a 57-yard touchdown run to give Brooklyn a short-lived 7-0 lead.

Justice Bartley hauled in a 54-yard touchdown pass from Sam Schuster but the Skippers failed to convert the two-point conversion and trailed 7-6.

Paugh finished the night with 26 carries for 287 yards and three touchdowns. His career night was set up by the work of the offensive line.

“Our offensive line of Martin Mendoza, Mike Voiles, Quentin Piotrowksi, Deano Spiesman, Noah Greene, and Dillon Knesebeck put the team on their back and blocked great all night,” Ruff said. “They made room for our running backs all night and provided ample time for Sam to throw.”

“This was Fairport’s first homecoming win in a long time,” Ruff said. “These kids deserve every minute of this victory because they played their hearts out.”

Jayden Alston led the defense with eight tackles and a sack and Voiles finished with six tackles and two sacks. Schuster picked off a pass and Bartley recovered a fumble.