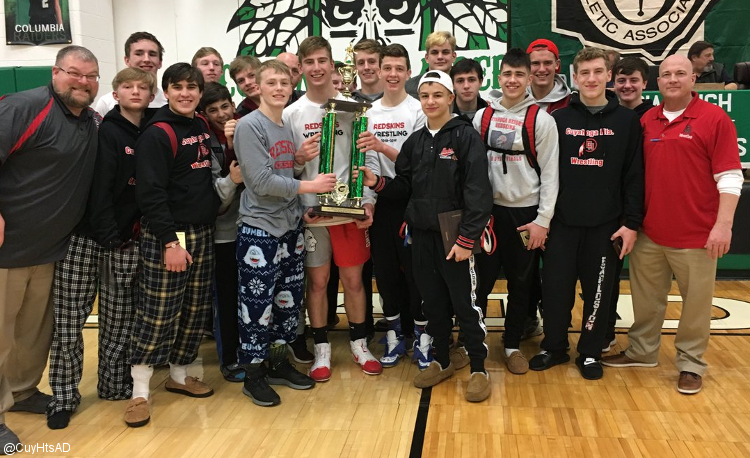 The Redskins had 10 of 13 wrestlers place on the way to scoring 175.5 points. Elyria finished second with 140.

“We made it our goal this week to win this 12-team tournament,” Cuyahoga Heights coach Dave Meade said. “We stressed that in order to do that we needed contributions throughout the lineup. We not only needed the usual kids wrestling for first and second to contribute with bonus points but the younger kids to wrestle back and score us points and place.”

“Luke Hopkins continued his dominant season and took first in addition to taking home the Most Valuable Wrestler award,” Meade said. “I was extremely proud of the team’s performance. Now we get back to the room and keep working hard to improve and to tackle more of our team goals.”

Frye won an exciting 5-4 overtime match in the championship bout while Meade pinned all three of his opponents and Krucek flattened his four opponents.

Zach Kudroff (120) and Elijah Durham-Harris both finished second while James Flowers (160) was third. Paul Jacobs (132) and Mike Schmidt (145) both placed fourth for the Bison.