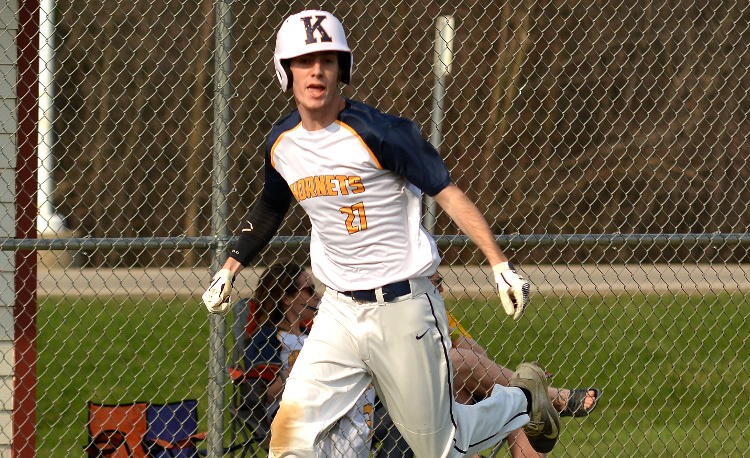 Kirtland baseball coach Luke Smrdel isn’t superstitious but he may think twice before altering his wardrobe in-season after the Hornets scored four runs in the bottom of the seventh inning to defeat Crestwood, 7-6, in a Division III district semifinal on Monday at Lakewood High School.

“My wife asked, ‘Do you need your other shoes?’” Smrdel said. “She sent Louie Loncar out to the car and he brought back my old Boombahs. They’re my rainbow shoes. They’re old and all pink and yellow; all neon colors.”

The Hornets went on to score four runs on three hits and three walks in the bottom of the seventh to punch their ticket to a second straight district championship game.

“It was do or die,” Smrdel said. “The kids said we’ve got to do it and next thing you know, we got a couple of guys on and good things happened.”

Trailing 6-3 with three outs remaining in the game, Joey Torok drew a leadoff walk and moved to second on Joey Mongelluzzi’s double down the third base line. Seann McGill then grounded out to second but Torok scored to cut Kirtland’s deficit to 6-4.

Mike Alfieri singled home Mongelluzzi to pull Kirtland to within 6-5.

Anthony DeMarco was inserted to run for Alfieri. He moved to second when Mason Sullivan drew a one-out walk and then Jayme Torok singled to tie the game.

Torok was 0-for-3 before his game-tying hit.

Crestwood intentionally walked Jack Dever to create a force out at any base.

Andrew DeMarco hit a fly ball to center, which was deep enough to score Sullivan.

“I was struggling at the plate today so it was a good feeling knowing that I was able to put the ball in play and help my team out in a big moment like that,” DeMarco said. “The catcher called time right before I stepped into the box so coach Smrdel called me over and told me, ‘put the ball in play.’ The pitcher threw me three first-pitch fastballs in the previous at-bats so I knew it was coming again. I stepped in and swung at that first pitch knowing all I had to do was put it in play.”

Alfieri and Vince Liuzzo both finished the day with two hits. Sullivan was 1-for-2 but he scored two runs and knocked in three others. His big hit was a two-run homer in the third that pulled the Hornets to within 4-3.

Sullivan also picked up the win after relieving starter Andrew Spencer in the third.

Kirtland will play Villa Angela-St. Joseph, a 1-0 win over Wickliffe in the other semifinal, in Wednesday’s district championship game.

Look for Smrdel to wear his rainbow shoes on game day.