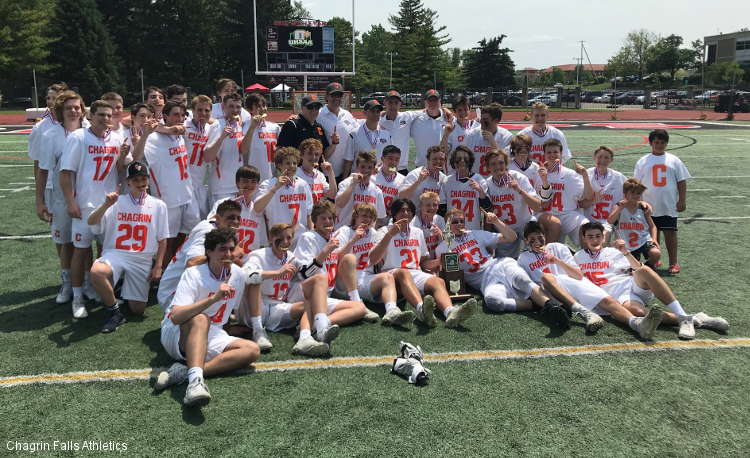 As a whole, the Chagrin Valley Conference enjoyed its share of success at the state level during the 2018-2019 school year, but what Chagrin Falls accomplished in the last week is nothing short of remarkable.

Chagrin Falls also finished as the state runner-up in girls’ lacrosse and had several other athletes place at the state track meet.

“It was very exciting,” Chagrin Falls athletic director Charlie Barch said. “Obviously, it was great having two teams in there at state lacrosse and then on Friday we had a long jumper finish 10th (at state track) and our 4×8 won the state championship for the fourth year in a row and our 4×4 didn’t qualify (for finals) but they at least made it down there.”

Zimosky’s win on May 25 inspired the rest of the Tigers to step up their intensity in their own state tournament events.

The 4×800 meter relay team went out on Friday and earned the second state championship of the week for the Tigers. Senior Catherine Coffey, junior Hannah Clark and freshmen Claire Coffey and Rose Hoelzel finished that race in 9:18.20.

For Catherine Coffey, who also earned all-Ohio honors by finishing second in the 800, it was her fourth straight state title in the 4×8. Clark earned her second title.

Senior Mick Lawrence placed 10th in the long jump that night with a leap of 20-feet, 7-inches.

The next morning, the Tigers came up short in the girls’ lacrosse state championship with an 11-3 setback to Columbus St. Francis DeSales but the boys’ team salvaged the morning with a 10-4 win over Cincinnati Mariemont.

Later that afternoon, Coffey finished as the runner-up in the 800-meter run and Hoelzel earned all-state honors with her eighth place finish in the 1600.

Chagrin Falls capped the week with its graduation ceremony on Sunday.

“It was kind of a crazy weekend for Chagrin,” Barch said. “It would have been great if the girls would have won too, but just making it there was a big accomplishment.”

Barch also had an accomplishment of sorts in being in multiple locations to watch his athletes perform.

He was at state track in Columbus on Friday and then watched both lacrosse teams play at Ohio Wesleyan University on Saturday, but he found a way to keep up to date on the happenings at the track meet.

Barch hopes the Tigers’ success this spring inspires Chagrin Falls’ underclassmen and future Tigers to set their own goals and to dream big.

“Obviously, kids talk and they understand and see when other kids are excelling and they want to be at the same level and do the same thing,” he said. “I think that definitely helps and it also helps the younger kids because we had a lot of our youth kids who came out and watched and hopefully that builds excitement for them to come up to the high school level and do the same thing they’re doing. It’s really exciting. Hopefully, it keeps building up and we keep doing the same thing year after year.”