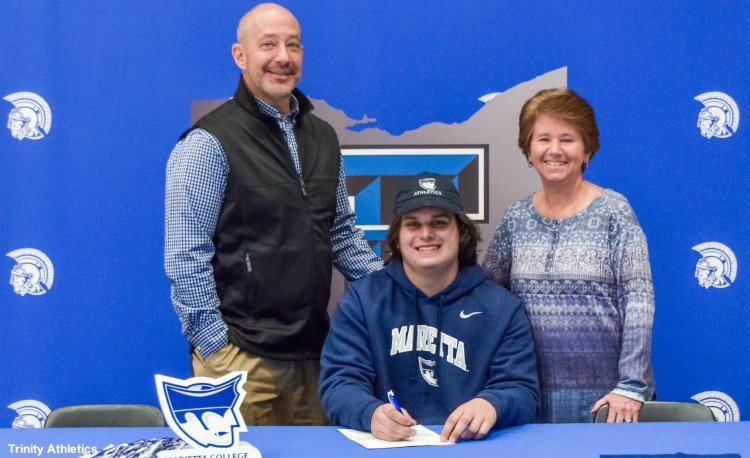 Trinity senior Dominic Pagano grew up dreaming of playing college football and on Monday, that dream became a reality when he signed with Marietta College.

Pagano already had an interest in Marietta College even before the Pioneers began recruiting him to play football.

Once the coaching staff made contact, Pagano’s interest in the college intensified.

After that visit, Pagano was sold on the school.

“What I liked most about campus was meeting some of the students and getting to know them, especially the football players,” he said. “Everyone seemed really nice and everyone seemed like someone I would get along with very well. I felt it was a good fit for me personally.”

“Personally, I believe that I will fit perfectly into any role that I am put into on the offensive line,” he said.

He’s hoping to find similar success at the next level.

“(My) short-term goals are to go out this August and make an impact on the team,” he said. “Whether that’s on the practice squad or in the games, I just want to help make the team better. Long-term, I hope that I can have the same impact on the (Ohio Athletic Conference) as I did on the CVC.”

Signing with Marietta was bittersweet for Pagano as he’ll miss the high school experience and the time he spent with his Trinity teammates.

“Personally, what will always stand out to me will be the time spent with my teammates in between practices on two-a-days,” he said. “Everyone just hanging out and enjoying themselves.”