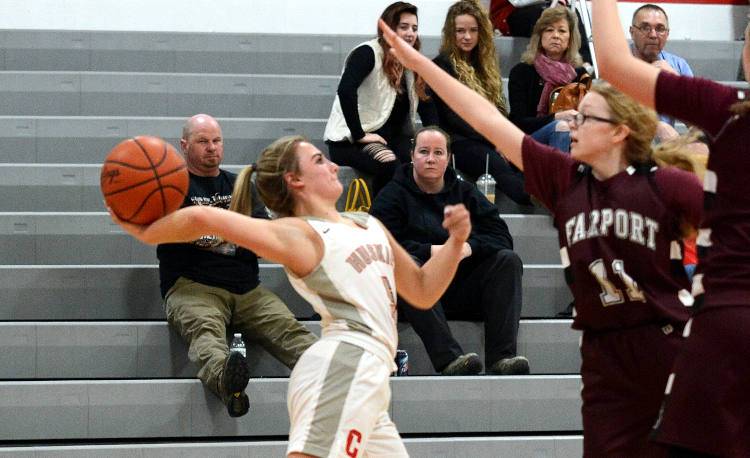 Cardinal opens the 2020-2021 season with three returning starters and five other players with varsity experience.

While the Huskies gained valuable experience last season, the team is still very young and vertically-challenged.

“The biggest challenge we will face this year is our lack of height,” said second-year head coach Joe DiMattia. “It is hard to differentiate between our guards and our post players. It is not a new challenge, unfortunately. Last year, we lost three or four games solely on the fact that we gave up too many second, third, fourth, fifth chance points. We had our two tallest girls from last year decide not to play this year, including our second-leading rebounder. We work hard every day on boxing out and having the desire to get the rebound.”

The Huskies, who finished 7-16 overall last season, have just two seniors in the projected starting lineup.

That relative lack of experience isn’t new to the program.

“Although we have a lot of returning varsity players, we are still a young team that has a lot to learn,” DiMattia said. “We will be able to compete in a lot of our games, but we will also take our lumps some games. I’m hoping we learn from these games and continue to get better every day. With a young year, that is a goal that we stress every day–work hard to get better every day. Finally, we have to stay healthy. We have 11 total players in the program, and can’t afford to have many injuries or illnesses. We have already lost two weeks due to COVID, and can’t afford to lose more time. It is definitely going to be an interesting season.”

Leading the way for the Huskies is three-year starter Haley Domen, a junior guard.

Last winter, Domen averaged 12 points, 4.5 rebounds, 2.5 assists and 3.7 steals per game. She led the Huskies in scoring, 3-pointers made, assists and steals, and finished third on the team in rebounding, despite her diminutive frame.

“Haley is the heart and soul of our team,” DiMattia said. “She does it all for us. She is a fierce player and gives it her all every game. There isn’t anything I couldn’t ask her to do that she can’t do. I expect Haley to play about 31 minutes and 45 seconds every game. She’s a co-captain for the second year in a row.”

Doolittle, a post, averaged 4.2 points and 6.5 rebounds per game on her way to earning honorable mention all-conference and all-district honors.

“Bri is going to be our main post this year,” DiMattia said. “She isn’t the tallest, but she works hard down low and led the team in rebounding last year. We are going to need her to step up again this year and do it again. She is a co-captain for the second year in a row. Bri is a hard worker and is one of those players who you know will be ready to compete every day.”

Fortenbury, also a post, averaged 2.4 points and 3.1 rebounds per game.

“Lorena has really stepped it up last year,” DiMattia said. “She was voted a co-captain and her hard work has been noticed by all three coaches. She was on my list a few times last year for her attitude and effort but has been amazing this year. Lorena will be a post for us, but will also be able to step out to the wing and knock down a couple of 3-pointers as well. Lorena is a girl who will not do anything super fancy, but someone that I have a lot of confidence in to be in the right spot and to do the right thing.”

Collins, a guard, averaged 3.7 points and 1.5 steals per game last season. She was second on the team in steals and third in scoring on the way to earning honorable mention All-CVC honors.

“I said it last year, I’ll say it again; Ronee is pound-for-pound the toughest girl on the team,” DiMattia said. “She has a ton of potential to do a lot of good things and can be a huge threat from the outside and can take some of the pressure off of Domen.”

Pollack, a guard, averaged three points, 3.5 rebounds and two assists per game as a junior.

“(Pollack) is one of our guards that can knock down 3-pointers,” DiMattia said. “She can handle the ball and will help give Domen a chance to catch her breath during the game. She is coming back from shoulder surgery during the offseason and has been rehabbing hard to get ready for basketball season.”

Ehrhardt and Hemrock both are posts.

“Megan is another girl who will not do anything flashy on the court, but will be in the correct spot and know what is going on. She is a hard worker and is always encouraging her teammates to do their best,” DiMattia said. “Maddy will see some varsity time this season. She showed a lot of improvement from the beginning to the end of last season and I am excited to see what she is able to contribute this season.”

Layman can play guard, wing or post. Ayer and Soltis are wings.

“Of the freshmen, Anna is the most ready to contribute to the varsity program. She is a girl who will play all over the court. She is athletic and scrappy and isn’t afraid to get on the ground for a loose ball. She is young, she is unpolished, but she has a huge upside. I like what I have seen from her so far,” DiMattia said. “Carly is a freshman who has come in and really worked hard to learn everything. She comes to practice ready to work and ready to learn every day. She has passion and dedication for the game and can be a bright spot this year if she continues to work hard and improve every day. Morgan is a girl who is going to improve every day this year. She is learning the process and if she continues to work hard will get to see some varsity time.”

While young and undersized, DiMattia has been impressed with his team’s work ethic during the preseason.

The Huskies will have to maintain that level of intensity on game day.

“We have been working really well as a team this year,” DiMattia said. “The girls seem to be closer than they were last year and they are doing a better job of encouraging each other and pushing each other to do their best. Hopefully, this translates to more success on the court.”