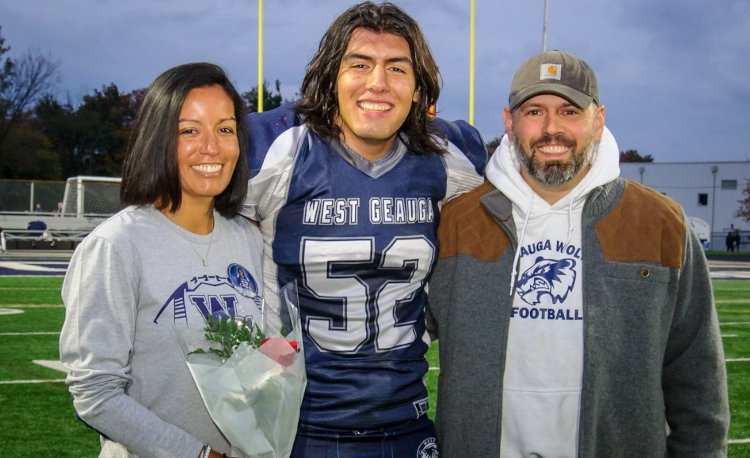 West Geauga senior Lucas Sadler last week announced his intention to continue his education and football career at the University of Wisconsin-Whitewater.

“It’s amazing,” he said. “I’ve worked so hard for this opportunity, especially an opportunity from a school like Whitewater. I’m really excited to see where my education and athletic career leads me throughout and after college.”

The coaching staff at UW-Whitewater began recruiting Sadler over the summer.

They invited him to campus during the football season to learn more about the school and football program.

“UW-Whitewater felt like home,” Sadler said. “The campus is beautiful and the program there is just one of the best in the country, and it’s just a school I want to be at.”

Sadler likely will end up at linebacker or along the defensive line when he begins his college career.

“I don’t really know which one I’m going to play but wherever they feel is best for me I’ll play and I’ll stand out and show my abilities at both positions,” he said. “I feel like I could be a dominant middle linebacker for them.”

Also a standout on the West Geauga wrestling team, Sadler hasn’t ruled out the possibility of competing in both sports at the college level.

“I don’t really know yet about what I’m going to do with my wrestling career after high school but I know they have a pretty good program in wrestling also, so I also might be wearing a UW-Whitewater singlet in the future,” he said.

Sadler, who plans to major in criminology or criminal justice, has lofty goals for his career at Whitewater.

“My goals are to be the best I can be and keep challenging myself to be better and better every day on the field and in the classroom,” he said. “I’d love to set records there and be one of the best players to come out of UW-Whitewater.”