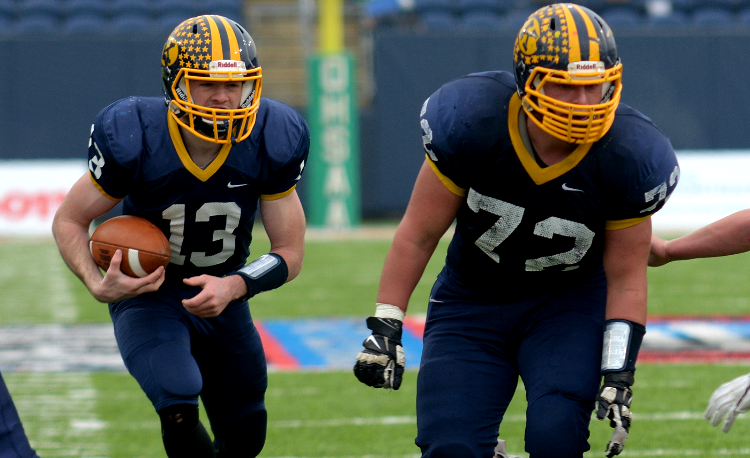 The Chagrin Valley Conference Valley Division has a new look to it but the path to the league title could follow a similar path with defending champion Kirtland fresh off its fourth state title.

Kirtland returns just two offensive and three defensive starters from last season for 14th-year head coach Tiger LaVerde. However, the Hornets, who finished 15-0 overall and 7-0 in league play, once again have high expectations this season.

Like always, the Hornets will focus on running the football and chewing up the game clock. With several speedy backs and a well-established work ethic, Kirtland’s lineup will have several new faces but the team should look similar to any other in the LaVerde era.

“I would say team speed and the kids’ willingness to work hard every day,” LaVerde said when asked about Kirtland’s strengths. “We have to stay healthy and continue to not take anything for granted. We need to keep improving every day.”

Most of the mountains on Kirtland’s mammoth offensive line graduated but three-year starter Mike Alfieri returns to anchor the line on both sides of the ball.

“He’s our strongest guy,” LaVerde said. “He’s a three-year starter and really solid on the offensive and defensive lines.”

Here’s a look at Kirtland’s challengers in the Valley Division:

“Our team’s strength is our athleticism,” Creel said. “Our three main ball carriers return but we’ll be putting in a new quarterback this year. Hopefully, that is one of our strengths but right now we don’t know. We want to make sure we put the ball in our playmaker’s hands.”

The Bison have no shortage of playmakers in the skill positions including first-team All-CVC performer Letraize Walker and second-team selections Dawann Gray and Kendyn Wiggins.

Walker is a senior running back but also can play wide receiver and defensive back.

“He is a lockdown kind of player,” Creel said. “We always put Letraize on the opponent’s best receiver.”

Gray is a senior running back/linebacker and Wiggins plays running back and defensive back.

“Dawann is very versatile. He led the team in tackles last year with 112. We are expecting him to have a great season,” Creel said. “(Wiggins) was one of our most explosive runners offensively. He is a very physical kid, defensively. We are expecting big things from him as well.”

Beachwood has two other returning starters who were named All-CVC last fall.

“We are expecting Antonio to have an explosive season on that defensive and offensive line for us,” Creel said. “We’re also looking for Jack to have a great defensive season for us.”

Junior offensive lineman Ethan Winger also will be counted on to eat up opposing defensive linemen.

With just 31 kids on the roster, Beachwood’s conditioning will be tested as most starters will play both ways. That means the Bison will have to stay healthy and dominate on both sides of the line.

“It’s just going to come down to our front, our offensive and defensive lines, to play well,” Creel said. “We have inexperience on both sides of the line but if those two lines play well, we have a good chance of being okay.”

On paper, Berkshire has a mountain to climb after last year’s 1-9 season but this version of Badger football has plenty of potential.

“We have a lot of young players with experience at the varsity level,” DeWeese said. “This team plays for each other. They’ve been through some tough times on the field and have grown closer because of it.”

For the Badgers to be successful this season, they’ll need to play with a high level of intensity from whistle to whistle, follow the game plan and make big plays when they have the chance.

“We need to be aggressive from start to finish and take advantage of opportunities when they are presented,” DeWeese said.

Junior quarterback Jake Brown and senior running back Ryan Pennypacker are among Berkshire’s most talented and experienced players.

“(Brown) is really starting to come into his own at quarterback after his sophomore season,” DeWeese said. “(Pennypacker) has seen it all on the field and we’re expecting big things out of him this season. We have a strong core on the defensive line and at linebacker led by senior Zac Nehas, junior Evan McDermott and junior J.J. Perrin.”

Nehas and McDermott play middle linebacker while Perrin is a defensive tackle.

That’s a tall order to fill but Gresko and the Huskies have the pieces in place to start that process.

“At offensive line, we’re pretty solid. We’ve got two big guys that do a lot of work upfront,” Gresko said. “We have a solid linebacking corps too. They fly around and they’ll smack you.”

The Huskies closed out the 2018 season with back-to-back wins and hope to ride that momentum into the 2019 season.

As is the case with most teams, success starts with the players believing in themselves and competing at a high level regardless of the adversity faced each Friday night.

“Dario is a leader by example. He does everything. He listens to coaching and he’s a great leader for our team,” Gresko said. “Dom is the heart of our defense. At middle linebacker, he’s our play-caller and leader on the defensive end. Granny is our physical leader. He’s our 6-foot-4, 270-pound offensive tackle and he won’t take crap from anyone.”

The new kids on the block also have a new head coach entering the 2019 season.

While Clint Nims and the Mustangs are new to the CVC, they are very familiar with the league having played both Berkshire and Cardinal last season and facing at least two CVC teams in most recent seasons.

The Mustangs also are the only current Valley Division team to beat Kirtland in the past 10 seasons.

Grand Valley’s strengths lie upfront on both sides of the ball.

Senior two-way lineman Mason Shreve is a leader on and off the field.

“He is a returning starter for us on the offensive and defensive line,” Nims said. “He is a leader on the line for us. How he goes, our team goes. He works hard in the offseason and we are looking for big things from Mason.”

Senior running back/linebacker David Nye is sure to follow behind Shreve on offense and on defense he moved from the defensive line to linebacker.

“We are excited about that move and looking for him to have more carries this year,” Nims said. “He carried the ball for 450 yards last season, but we had two or three other running backs. This year he will be the main ball carrier for us. We are excited to see what he can do as a featured back.”

Senior defensive back Evan Heller is the quarterback of the secondary.

“He started last year and he is returning on the defensive side of the ball,” Nims said. “We will be looking for his leadership.”

After a year away from the CVC, Hawken returns and the Hawks hope to be competitive with 10 returning starters in the lineup.

With a host of talented skill position players, Stephenson is confident Hawken will be vastly improved this year but for that to happen the Hawks will have to continue developing their maturity and game awareness.

“We have to stay healthy,” he said. “We have to keep in-game experience. 55-percent of our team consists of underclassmen. We have to continue to mature on the football field and keep developing our football IQ, but the biggest thing is to stay healthy.”

Junior wide receiver Cooper Jared and junior running back Zach Miller are talented players who will be counted on to make big plays this fall.

“Cooper is a young man that is really active in terms of his building his skill set. He is a guy that is a leader of his teammates and really pushes himself to get better each day. He probably has the best route-running ability on the team,” Stephenson said. “Zach is very physical, has great sight, and has great hands in the backfield.”

Senior two-way lineman Will Lindsey is a team captain and will be a force to be reckoned with on both sides of the ball.

“He is one of those guys that work really hard with the offensive line and defensive lines,” Stephenson said. “He leads those guys day in and day out, but really has matured mentally and physically over the past year and really should be a guy who contributes well for us this year.”

Wickliffe enters the 2019 season with high hopes, especially after qualifying for the postseason in each of the past three seasons.

But, the Blue Devils are without the services of standout running back Isaac Pettway, who graduated. Softening the blow from that graduation loss is the return of junior running back/linebacker Chase Fortkamp, who already earned a scholarship offer from Kent State University.

“He was successful last year on both sides of the ball,” Porcello said. “He is a captain and one of our hardest workers on the team.”

“(Rypinski) is a captain and has worked really hard in the offseason. This is his first year playing quarterback, but he is very confident and has high football IQ,” Porcello said. “(Fisher) has started three years and will anchor our offensive line.”

Juniors Isaiah Bolon and Mason Bala also will join Fortkamp in the backfield and see time in the defensive secondary.

“Isaiah is a second-year starter. He’s a very athletic player on both sides of the ball and is very physical,” Porcello said. “(Bala) is athletic and has the smartest football IQ on our team. He will make all of the defensive calls.”

With some of the top talent in the league, the Blue Devils will have a lot to say about who claims the league title. As is the case with the rest of the teams in the division, avoiding injuries and overcoming adversity will be the key to Wickliffe’s success.