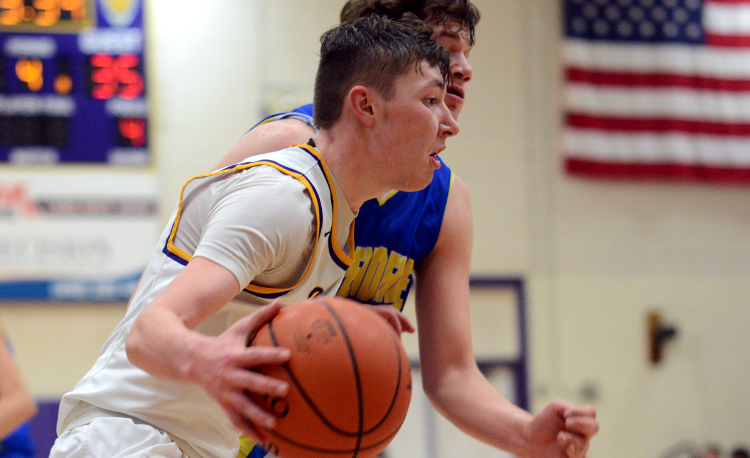 Berkshire returns just one starter from last year but the Badgers are embracing the opportunity ahead of them.

While the squad lacks experience, second-year head coach Ryan Dickard is excited by what he has seen out of the Badgers in the preseason and he’s looking forward to tackling a new challenge this winter.

“Excited and optimistic are the two words I would use to describe our coaching staff’s feelings about our squad,” Dickard said. “They are an extremely coachable group of student-athletes that listens to our instruction and applies it quickly to live action. Their work ethic as a whole is another area that our coaching staff does not have to get on them very much about either. Those two qualities are some of the most important determiners in having a successful season regardless of talent level.”

The Badgers aren’t short on talent but they do lack size, which could present a problem against some of the bigger teams on their schedule.

“The biggest challenges we will encounter this season are our lack of size and athleticism,” Dickard said. “We are embracing these challenges and hope to turn them into strengths through our emphasis on fundamentals and skill work each day in practice. What we lack in speed/height, we hope to make up for in skill/technique. “

Dickard also is confident the Badgers will put forth maximum effort in every game, which also could minimize their shortcomings.

“Our team’s strengths right now are our versatility and our determination,” he said. “We are a very determined group that has many players eager and willing to step up and do what needs to be done to compete at the varsity level. We have about eight to nine players, when fully healthy, that are interchangeable and able to do many things on the court both offensively and defensively.”

Leading the way is the lone returning starter Jake Sinkenbring, one of two seniors on the Badger roster.

“Jake is our most experienced player,” Dickard said. “He is a three-year varsity starter who has embraced a leadership role and mentors many of our younger players. He can do many things well on the floor and is a player who we will rely on to get us through tough times in games and during the season. We expect great things this year and are confident he will take his game to the next level.”

“Jay is a tireless worker who has energy and heart for days,” Dickard said. “There aren’t many people who will outwork Jay on the court and he is a player that sets the tone for the team day in and day out. He is one of three varsity players that reached an offseason milestone of ours in the amount of shots made and did so in switching his shooting hand from left to right-handed.”

“Matt is an immensely talented individual who is still putting the pieces together. We are extremely optimistic about the level he is currently playing at as well as the potential he has to become a complete player and one that can earn many individual accolades and accomplishments,” Dickard said. “Isaac’s work ethic is second to none. He spent the most amount of time working on his game over the summer. He is willing to do anything he can to help the team and is someone whose determination will always be his greatest strength. He can do many things well and is one that, once he gains the experience, will be relied on early and often.”

“Chase is yet another player that worked his butt off in the off season,” Dickard said. “He is another player that put up a record amount of made shots in the offseason and it shows. He played sparingly on our JV team last year and has blossomed into a key contributor and probably starter on our varsity team this year. Chase is going to be relied on to battle with bigs down low on the defensive end and stretch them out on the offensive end. He may be our most important piece to a successful season.”

Barcikowski, a 5-foot-11 guard, is one of the most active of Badgers.

“Lenny goes 100-percent in everything he does on the court,” Dickard said. “We never have to get on him about effort and intensity. He is our voice on the court, on the bench, and wherever else we may be. He is getting better each and every day and will play important minutes for us throughout the year.”

Bergmeier, a 5-foot-9 guard, is one of the most versatile players on the roster and will be one of the first players off the bench.

“J.T. is a smart and gritty player,” Dickard said. “He is one that makes up for any lack of size and athleticism with his heart and his head, which are much more important qualities in my opinion. J.T. is considered a sixth starter for us and one that will be on the floor during the most important moments because we can count on him to make the correct decision and be in the right spots.”

“Jake is our other returning player with varsity experience. He is a three-sport athlete that others look up to for guidance. Jake is coming back from injury and we can’t wait to have his physicality, shooting, and rebounding to help our team compete on both ends of the floor,” Dickard said. “Garrett is a player that fills many roles for us. He will be asked to know every position offensively and defend many positions defensively. We are confident in his ability to make a positive impact on the floor in practice and games each week.”

“Nathon is a player that does many of the little things that often go unnoticed on the court. His determination is what makes him most valuable and there aren’t many things he won’t do on the court,” Dickard said. “Dakota is an athletic marvel that we are excited to get a chance to mold into a late-season contributor for us. He has many tools that he is still learning to harness and use to help benefit our team. We are extremely excited to work with him day in and day out and are confident he will be a big part of our future.”

Kuehn, a 5-foot-11 guard, and Yalanty, a 5-6 guard, have the potential to be multi-year contributors.

“Jack is a gritty player that is one of our top defenders. He is still rounding out his skill set, but with his attitude and how he responds to coaching, we are confident that he will learn quickly and be a big part of our future,” Dickard said. “Alec is a player we have had our eye on for a while now. He is an extremely quick and shifty player that is a quick learner. He picks up new skills every week and will be cracking our rotation quickly this season despite his youth.”

Berkshire’s keys to success aren’t unlike those of most other teams.

The Badgers must make smart decisions with the basketball, limit turnovers, rebound and focus on quality shots.

“Our team goals this season are to compete in every game, work hard to improve every day, and have a positive attitude in all that we do,” Dickard said.