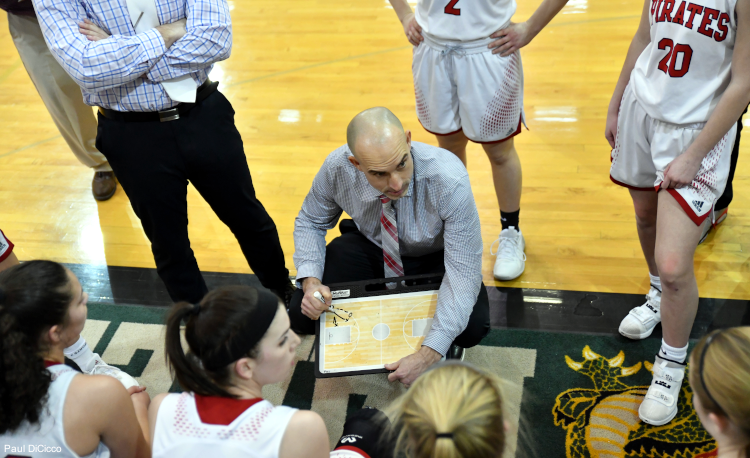 Perry had 10 different girls score and the Pirates played stingy defense in the second half to pull away from Andrews-Osborne on Tuesday, 73-42.

The Pirates had built a 39-27 halftime lead and then held Andrews to just 15 second-half points as they improved to 2-0 on the season.

“I thought we played a really good second half,” Perry coach Roy Infalvi said. “We picked it up on the defensive end and started getting a flow going. We played pretty well to close the game out.”

Perry played pretty well to open it too.

Madyson Hacking scored 13 of her game-high 22 points in the opening quarter.

She went 4-for-4 from the free throw line and drained a 3-pointer to help the Pirates build a 20-13 lead. Marcela Rodriguez picked up in the second quarter where Hacking left off in the first.

Rodriguez drained a pair of 3s and was 2-for-2 from the line as she scored all eight of her points in the second period.

“I’d like to have four girls in double figures each game,” Coach Infalvi said. “We didn’t get that but we were close. Marcella had eight and we had a couple of girls with seven. We had 10 girls score, which was good. I’m happy with that but I think we can get more of that balance going as we move on.”

Despite the offensive success, Andrews-Osborne was within reach at halftime, mainly due to the play of Tai Roberts.

Roberts finished with a team-high 16 points.

“She did a really nice job for them,” Infalvi said. “She was able to get some penetration and get to the foul line that put us in a little bit of foul trouble early on.”

The Pirates adjusted to Roberts and held her scoreless in the third period.

Perry outscored Andrews in the second half, 34-15.

A little bit of it was containing them,” Infalvi said. “On some of their penetration, especially (Roberts), we weren’t rotating very well and were doing a little too much reaching instead of moving our feet and cutting off the penetration. We talked a little bit about that at halftime and kind of went over our rotations again. The girls came out and responded to that. We did a lot better job of cutting off the middle and forcing them to do some things they didn’t want to do like shoot the ball outside a little bit more and we contested more of their looks.”

Gigi Vicini saw her first action of the season for the Pirates despite not practicing over the last week and a half. She finished with four points.

Sophia Makad contributed to the win with seven points, Maddy Lambdin and Izzy McKoon both scored six, and Grace McKoon, Maddie Stevenson and Rylee Hodge all finished with two points for the Pirates.

“We’re still kind of a feeling-out mode as far as getting some chemistry going,” Infalvi said. “I tried some different lineups, especially in the first half. In the second half, we went with more of a normal rotation and that helped a little bit too.”