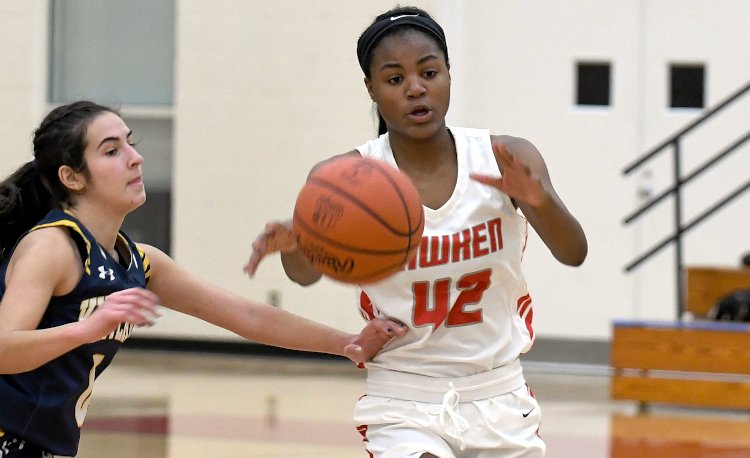 With three returning starters from a team that finished 14-3 during the challenging 2020-21 season, Hawken’s girls’ basketball team has positioned itself for another strong campaign this winter.

The Hawks also return seven other players with varsity experience.

“We are extremely excited about the upcoming season and the players we have in our program this year,” said sixth-year Hawken head coach David Murray. “Last year presented a unique set of challenges which forced our coaches and players to be extremely adaptable and resilient. We are optimistic that last year’s adversity will help lay the foundation for this year’s team.”

Hawken will lean on its experience early in the season as the Hawks forge their path this season.

“Our team has a lot of returning experience for a high school program,” Murray said. “This has translated to strong leadership on the court and in the weight room. As coaches, the collective experience of our team has afforded us the opportunity to be exceptionally collaborative. Our players have a well-defined set of goals for the season and they are aware of the amount of work that will be required to achieve these goals.”

Despite their returning experience and talent, the Hawks will face their fair share of adversity this season.

“I think that we can anticipate facing the same challenges as a lot of teams,” Murray said. “As a program, we can work to overcome these obstacles by focusing on the things that are within our control and approaching the season one day at a time.”

Makayla White, a 5-foot-10 senior forward, is a returning starter who led the Hawks with 14.2 points and 8.3 rebounds per game last season on the way to earning first-team All-Chagrin Valley Conference and second-team all-district honors.

“Makayla is one of the best leaders and hardest working athletes I have ever coached,” Murray said. “She is an integral part of everything that we try to do on both ends of the court.”

Julianna Pollard and Maya Dori are returning starters at the guard positions.

Pollard, 5-foot-4, scored 5.9 points with 2.3 assists per game last season while Dori dropped in 7.0 points per contest and shot 42-percent from behind the arc. Pollard earned first-team All-CVC and honorable mention all-district honors.

“Julianna epitomizes everything that a coach looks for in a point guard and a leader. She has a tremendously high basketball IQ and helps direct her teammates like an extension of the coaching staff on the court,” Murray said. “Maya is an exceptional shooter and one of the best teammates I have ever coached. Her love of the game and basketball acumen is exceptional for a high school athlete.”

Bollinger is a returning starter who averaged 8.3 points and 7.2 rebounds per game last season on the way to earning second-team All-CVC and honorable mention all-district honors.

“Kate is a tremendously versatile player who impacts all facets of a game. She has a rare combination of skill, effort, and athleticism,” Murray said. “Rosie is extremely athletic and hard-working. She is an outstanding defender who impacts a game in many ways that transcend a box score.”

“Elizabeth is an outstanding athlete and one of our strongest perimeter defenders,” Murray said. “After suffering a knee injury in March, Carmen has worked exceptionally hard to get back on the court. As a two-year returning starter, it is impossible to capture everything that she means to our team.”

“Shannon has worked diligently throughout the offseason, in the weight room and on the court, to become a stronger all-around player,” Murray said. “Cami is a highly-skilled player who epitomizes everything we emphasize in terms of defensive intensity and hustle. Sarah has a very high basketball IQ and sense of court awareness. She sees the floor better than most players her age.”

Hawken’s team goals are simple. The Hawks want to play well enough to compete for a league title and to make a deep postseason run.

“The key to a successful season will be to approach things one day at a time,” Murray said. “If we can focus on the present, everything else will take care of itself.”