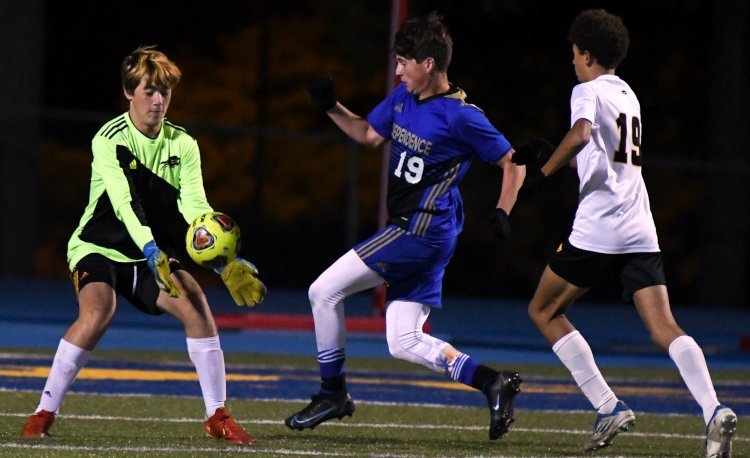 With the win, the Bison clinched at least a share of the Chagrin Valley Conference Metro Division title and can claim the championship outright with a win over visiting Wickliffe on Oct. 6.

“I was very happy with the way the boys played tonight,” said Beachwood coach Brian Greene. “I was a little bit worried of a letdown because Brooklyn canceled or forfeited on us last week and then we came off that big win against Hawken. Independence is always well-coached and I know the kids are well motivated. I hadn’t seen them play but I knew they were going to come out and play hard but the way Grant came out firing, it was pretty awesome.”

Keilin scored early and often in the first half to give the Bison a 3-0 halftime advantage.

His first goal came just 14 minutes and 27 seconds into the game. His second was in the 25th minute and he closed out his hat trick off a Leo Blond assist with just under five minutes left in the half. He now has 14 goals on the season.

“We play a very possession-based style of play and I don’t know if they had a man marking him but that’s tricky sometimes when you man mark a guy all over the field because he kind of winds up getting in the way of the other defenders at times and if they left an opening for him, he exploited it,” Greene said of Keilin. “He’s a very talented player and a very smart player.”

Alonzo Tovanche made it 4-0 five minutes into the second half when he finished off a touch pass from Blond, who recorded two assists in the game.

Gui Kliger added a goal two minutes later off an Ozan Sasmaz assist and Sasmaz closed out the scoring when he buried an assist from Luke Bennet into the back of the net with just over eight minutes left in the game.

Josh Rosenblitt recorded three saves in the net for the Bison and now has five shutouts on the season, including two straight.

Landon Jatsek finished the night with five saves for the Blue Devils.

Beachwood improved to 10-1-1 on the year and Greene believes this team compares favorably to the 2014 and 2015 squads that played in back-to-back regional championship games.

“I noticed during the second week of the season that this was going to be a special group,” Greene said. “The way they practice and go after each other in practice and push each other, that’s when I knew this group was going to be like the group I had in 2014 and 2015. All these guys are so competitive and they are so hungry.”

With at least a share of the conference title under their belts, the Bison are eager to check off some of the other goals they have set for themselves this season.

Those goals are well within reach, especially if the Bison continue to play their stingy possession game and maximize their scoring opportunities through precision passing and spreading the wealth among its talented group of strikers.

“That’s what we’re aiming for,” Greene said. “We try to play a very attractive style of play. Hopefully, we continue to play the play like that. Knock on wood; you just keep after it and do the right things and try to play the right way and maybe things will work out for us.”