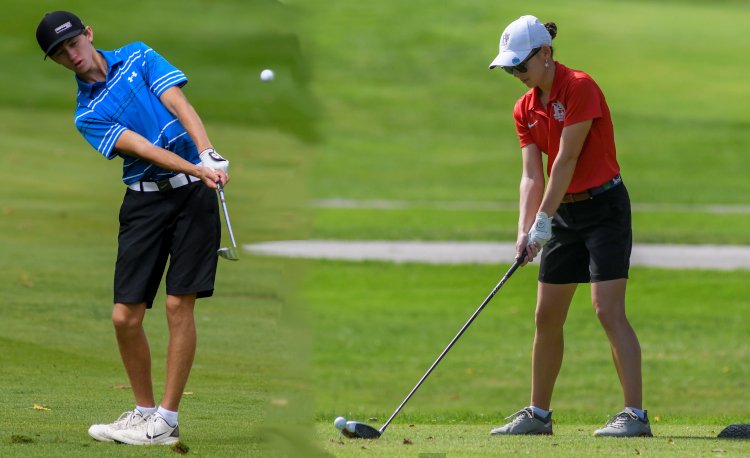 Pillar shot a 76 to win the Division III sectional title at Pine Hills for the second consecutive season. Behind Pillar’s medalist honor, the Blue Devils won the team title with a total of 331 strokes, 16 fewer than second place Dalton.

“The team has been playing well all season, so I’m very glad we were able to pull it together in the unforgiving weather and win sectionals,” Pillar said. “I’m happy that I had a good day and defended my title, but I’m more proud of the team and our accomplishments today. The goal is to keep moving forward with the team.”

Despite a weather delay and driving rain at times, Pillar battled through the elements to post a solid score.

He recorded nine pars, three birdies, four bogies, and two double bogies in his round.

Liam Jenks shot a 79 to finish tied for third, Charlie DeCapua placed sixth with an 81, and Sam Coddington closed out the Independence scoring with a 95. Joey Spacagna also played for the Blue Devils and carded a 98.

Independence will compete in next weekend’s district tournament with an eye on advancing to the state tournament for the second consecutive season.

“Although we know the competition will be harder, coach (Ryan) MacRaild has prepared us all season with challenging matches and big tournaments,” Pillar said. “I feel the team and I are well prepared for districts, all we need to do is focus on the task ahead.”

Kirtland’s Michah Reynolds shot a 90 to place 11th and Cuyahoga Heights’ Kaelib Graaf was 25th with a 98, but only the top three teams and top three individuals not on a qualifying team advanced to the district tournament.

Wong continued her mastery of Punderson Golf Course by winning her second straight Division II sectional title with a 77. Behind Wong and Kate Petersen, who shot an 85 to finish seventh overall, the Hawks shot a 369 as a team to place second behind sectional champion Independence, who carded a 356.

“It was great to begin the postseason with another sectional title,” Wong said. “My putting was my strength today, which has increased my confidence on the green. It’s also exciting that the Hawken team finished runner-up and qualified for the district tournament.”

Rain and wind pounded the players throughout the tournament but Wong didn’t let the weather negatively affect her round.

“The weather was not that much of a factor in my score since I was prepared to play in the cold,” she said. “However, the course conditions definitely affected everyone’s round. The course was extremely wet due to the rain from the previous days which prevented the ball from rolling. I sometimes had to club up on my approach shots to ensure that I would reach the green.”

Next up for Wong and the Hawks is the district tournament.

While Wong hopes to punch her ticket back to the state tournament where she can defend the state title she won last fall, she’s hoping to take the rest of the Hawks with her this season.

“I am looking forward to the final tournaments of my high school career,” she said. “Over the past three years, I have lowered my scores at the state tournament. Last year, I shot 71-75-146, and my goal this season is to requalify for the event, post a total score lower than 146, and defend my state title. I am focused on improving my game to achieve these goals. I also hope that I will be able to share the experience of competing at the state tournament with my team.”

Hawken’s Lizzie Kent shot a 101 to place 29th, Keira Chang closed out the scoring with a 106, good for 36th, and Helena Yanchar also competed for the Hawks. She placed 45th with a 112.

Junior Molly McGreal led the Blue Devils with an 83 to finish fifth overall. Emma Konopa, Hillary Esper, and Macey McGhee each shot a 91 to close out the scoring. Bel Trombetta carded a 93 for the Blue Devils.

Chagrin Falls shot 380 as a team to place third and earn a berth into the district tournament.

Marley Gabriel led the Tigers with an 89, Sam Holtz carded a 93, Ellie Conrad shot a 96, and Emma O’Brien closed out the scoring with a 102. Milly Fischer shot a 104 on the day.

Lutheran West’s Julia Colton advanced as an individual to the district tournament by finishing among the top four players not on a qualifying team. Colton placed 10th with a 90.