Beachwood off to best start in school history 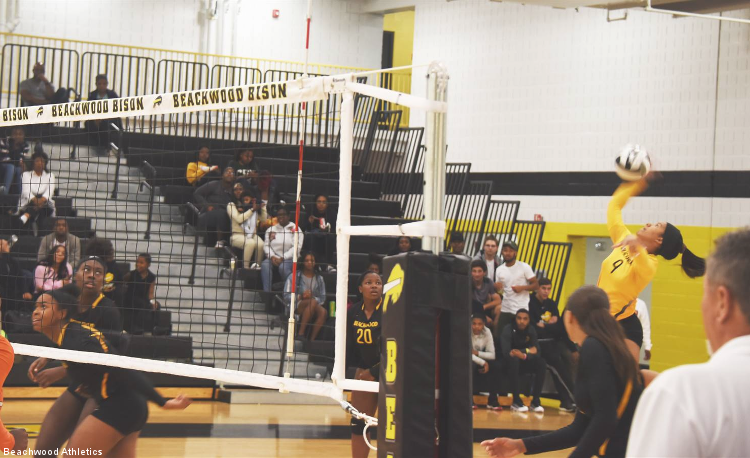 Beachwood’s 3-0 sweep of visiting Orange on Sept. 12 provided the Bison with more than bragging rights against their rival.

With the win, the Bison are off to a school-best 10-0 start this season.

“We have six seniors and they are at playing at a high level. They are determined to leave it all on the floor at each game,” Beachwood coach Tiffany McFarland said. “This is by far from a Cinderella story. The Beachwood volleyball program has struggled for a few years now, but now we can see the fruit from our labor as the coaching staff has dedicated so much time in developing girls and becoming competitive. We are excited for the girls and the Beachwood community.”

Erion Gibson led the way for Beachwood with 11 kills and she also recorded two solo blocks. Nicole Petty finished with 12 digs and 18 service receptions and Aaliyah Larry-Mitchell was 14-for-14 from the service line.

Petty has performed well this season and already broke the school record with 25 kills in a match against Hawken. Cassidy Gilliam also reached a milestone when she recorded the 1,000th assist in her career.

“The girls have been playing exceptional this far,” McFarland said. “Our offense has been led by our hitters Erion Gibson, Kyimani Miller and Damilola Aletor. Beachwood setter Cassidy Gilliam has worked hard to set up our hitters for great success at the net. We wanted to establish a fast offense since the season started. They play great as a team and have great chemistry on and off the court.”

While the attack has helped the Bison remain undefeated and earn a ranking in the Ohio Volleyball Coaches’ Association state poll, it has been the back row that has fueled the success this season.

“The momentum changer is our back-row play,” McFarland said. “The libero, Nicole Petty, has been active on defense. She manages to get balls that most teams wouldn’t expect her to get. Also, our defensive specialist, Kamryn Clark, is having a great season. She is the hustler and energy of the team. When she is on the floor, she just brings a calmness to the girls.”

Beachwood has recorded five sweeps this season and has lost just five of 35 sets played.