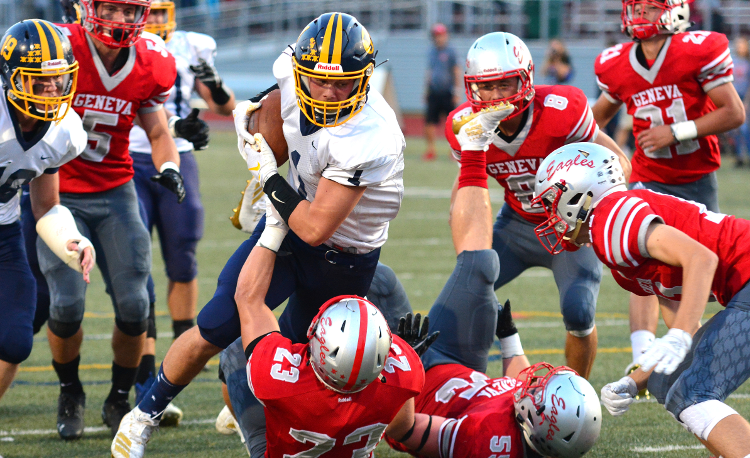 GENEVA—Mason Sullivan ran for 144 yards and Kirtland’s defense limited Geneva to just 119 total yards of offense in a 30-0 weather-shortened affair at SPIRE Academy on Friday.

After punting on their first possession of the game, Kirtland recovered a Geneva fumble on the Eagles’ 14-yard line. Sullivan scored on a one-yard run four plays later to give the Hornets an early 7-0 lead.

“It was very important because scoring that touchdown got our team hyped up,” Sullivan said of the game-changing plays early. “Coming into this, we knew it wasn’t going to be a bad game and so setting the tone early really helped out.”

Sullivan added a 17-yard touchdown run on Kirtland’s next possession and he added the two-point conversion to push the Hornet lead to 15-0 with 3:21 left in the first quarter.

He finished the night with a nine-yard per carry average on 16 rushing attempts.

“I have to thank my linemen for creating the holes for me,” he said. “All I do is run to where I’m supposed to go and if there isn’t a hole I find one.”

Another Geneva punt pinned Kirtland back at its own 18-yard line.

Sullivan ran for 66 yards on first down and Liam Powers closed out the drive with a seven-yard touchdown pass to Anthony DeMarco. Nico Podojil-Schlesinger added the extra point to increase Kirtland’s lead to 22-0.

Kirtland nearly added to its lead when DeMarco picked off a pass near the Kirtland 40-yard line and returned it for a touchdown. A holding penalty on the return brought the ball back to the 50 and time ran out on the Hornets.

The Hornets forced a Geneva punt on the Eagles’ first possession of the third then closed out the scoring with Luke Gardner’s 10-yard touchdown run with 7:35 left in the quarter.

Geneva responded with its best drive of the game.

The Eagles started at their own 20 but used 12 plays to move to the Kirtland 28. That’s where the drive ended when Ben Scibona’s pass fell incomplete on 4th-and-12.

“Our key to stopping their offense and being a good defense was to stop their two main players, Blake Peet and Charlie Taylor,” Sullivan said. “If we stopped them, then we stopped their whole offense.”

Taylor ran for 83 yards on 12 carries and Peet was limited to just 20 on five rushes.

Despite being undersized, Kirtland’s offensive and defensive lines owned the day.

“They were a very big, strong team,” Kirtland two-way lineman Mike Alfieri said. “We just had to focus on keeping them in front of us to keep them out of the way of the play. Our offensive line is progressively getting better and better. We still have a lot of work to do, but we are becoming more intact as the weeks go on.”

Kirtland improved to 3-0 on the year. The Hornets host Cuyahoga Heights next week. Geneva dropped to 2-1. The Eagles host Orange on Friday.