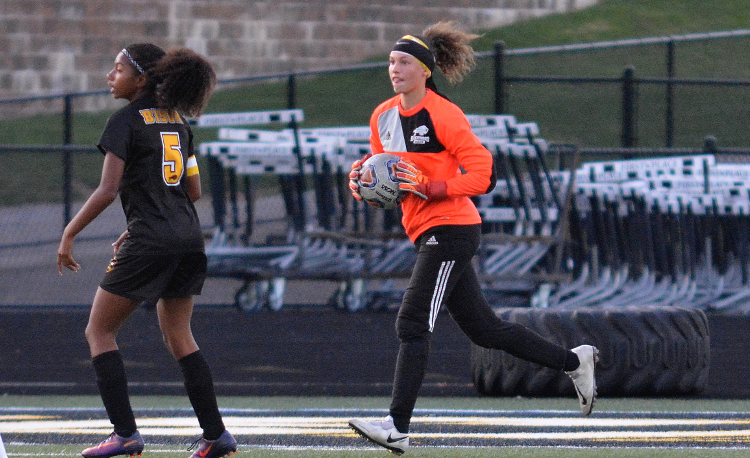 Beachwood’s hopes of winning a share of the Chagrin Valley Conference Metro Division remain on life support after the Bison earned a 0-0 draw at Wickliffe on Thursday.

The Bison are now 7-3-3 overall and 3-1-1 in league play. They need Trinity to upset Independence next week to earn a share of the conference title. Even more importantly, the Bison and Blue Devils played competitive soccer for 80 minutes, preparing each squad for the upcoming postseason.

“It was a great battle tonight between two very good sides,” Beachwood coach Jonathan Kostoff said. “We knew with Wickliffe only allowing eight goals this year that it would be a dog fight for 80 minutes. It had the feeling of a playoff game and that will serve us well moving forward as the postseason nears. We are happy to come away with a result at a tough place to play after last year’s heartbreaking loss.”

The Bison had their opportunities to push across the goal as Wickliffe’s Kaylee Lauriel recorded nine saves.

“We created plenty of chances tonight upfront both from the run of play and set pieces,” Kostoff said. “Both Romi (Roth) and Sydney (Sarver) did a great job at creating opportunities for themselves and our other attacking players but we just couldn’t put one in the back of the net.”

Wickliffe also puts its fair share of shots on target but Beachwood keeper Madison Prince was up to the task and finished with 12 saves.

“Our defense stepped up big time tonight to preserve the shutout,” Kostoff said. “Madison continues to show that she’s a top goalie in the league and our backline of Ashley Perryman, Ingrid Maier, Lucila Thal and Miranda Luxenburg locked down their front three.”

Wickliffe collected its third draw of the season and is 6-3-3 overall and 2-1-3 in league play.

“We put together a full 80 minutes of competitive play in this one,” Wickliffe coach Steve Gribovicz said. “The team seemed laser-focused tonight. The team communication was the best I’ve heard and the girls played as one unit for the whole game.”

Gribovicz was especially pleased with his defense’s performance.

“This game had back and forth momentum,” he said. “Both defenses held firm and both keepers stood out to play phenomenal games to preserve the clean sheets. These are two committed teams and the players left it all out on the field for an entertaining 0-0 result. I know some people don’t find 0-0 games entertaining, but this was a good one with two competitive programs playing a tough CVC game.”