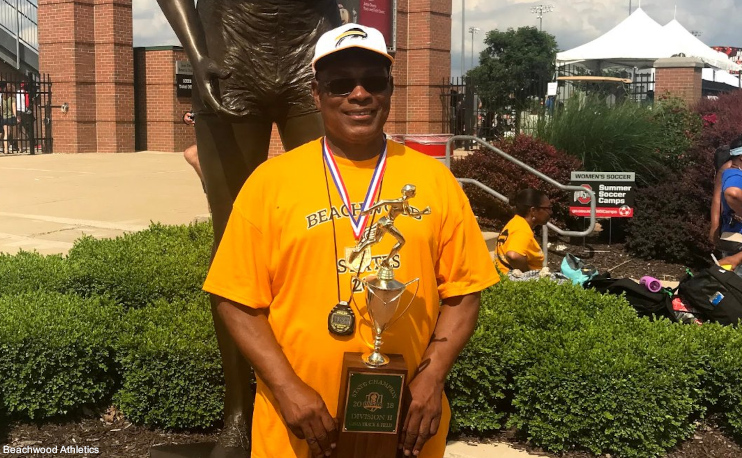 Last winter, Willie Smith led Beachwood to a sweep of the Ohio Association of Track and Cross Country Coaches Indoor Championships and as a result, Smith was named the OATCC Coach of the Year.

Less than a week ago, Smith learned he added another award to his impressive resume when he was named the National Federation of High School Sports Coach of the Year for Girls’ Track.

“Our track association for Ohio, OATCC, voted me the girls’ track Coach of the Year for Ohio, and everybody who was selected by their state was able to go up for a nomination for the national award,” said Smith. “That’s how it all came about.”

The NFHS honored 23 coaches from around the country in various sports. The association has presented its Coach of the Year awards since 1982.

Recipients of the award are nominated by state representatives.

Smith, who led the Bison to the OHSAA Division II outdoor state championship in 2017, is starting his 23rd year at Beachwood. His career began with nine years as an assistant coach at Cleveland Heights.

While the Coach of the Year award highlights the achievements of Smith’s athletes, his goal has always been to develop the kids into well-rounded adults.

“It’s about the kids graduating and coming back and naming me as the godparents of their children and kids coming back to the program and teaching them how to handle life outside of athletics,” he said. “That’s kind of what we try to do in our program is build life skills with the competition component of track and field. I think the kids really enjoy that and that’s more important than anything else. Getting the awards, that’s not the aim. It’s all about loving what you do. To get recognized is nice and I’m thankful enough to be healthy enough to coach and I hope that continues and I’ll do it until I can’t do it anymore.”

Smith said the cancelation of last spring’s track season hit him hard and he’s ready to get back at it this spring.

“We were fortunate to get the indoor meets in before everything was shut down,” he said. “I enjoy coaching and I enjoy the relationships with the kids and the parents and, most of all, the coaches. I don’t know how other sports operate but in track and field, we’re rivals, but we’re friendly rivals. We help each other and it’s a really great fraternity. I enjoy all of that and really missed it all last spring. It really left a hole in my heart.”