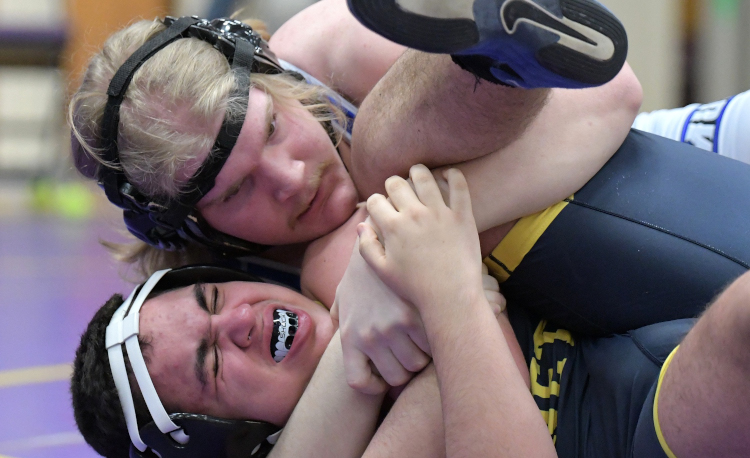 A total of 103 wrestlers from the league kept alive their dreams for a state title by placing among the top four in their respective weight classes at one of several area sectional tournaments on Saturday.

Berkshire hosted a Division III sectional and the Badgers pulled ahead of second-place Tuslaw during the semifinals round of the upper weight classes and held that lead. Berkshire finished with 223 ½ points while Tuslaw was second with 199 ½. Cardinal and Kirtland placed third and fourth, respectively, while Grand Valley and Hawken finished ninth and 12th in the team race.

Perry had 13 of its wrestlers place among the top four in cruising to the team title at Harvey. The Pirates scored 234 points. Geneva was fourth with 160 and Harvey placed fifth with 133.

The Wolverines advanced 11 wrestlers to next week’s Perry District tournament.

Edgewood’s Jared Biller (126), Kyle Biller (138), and Josh Biller (145) all finished as the runner-up in their respective weight classes while Joey Jafarace (third at 106), Austin Paneto (fourth at 152), Troy Peterson (third at 220), and Will Cooper (third at 285) also punched their ticket to the district tournament.

Lakeside placed sixth at the Division I Brecksville District and qualified five wrestlers to the district tournament.

Beachwood, Chagrin Falls and Orange all had three wrestlers place at the Division II Beachwood sectional.

Orange’s Te’Andre Allen was the lone CVC wrestler to win an individual title at the sectional. He claimed first place at 126 pounds. Orange’s Grant Bell (182) and Fred Berland (195) finished second and fourth, respectively.

Eric Steckner finished third at 160 for the Bison while Joshua Greenwood (138) and Uzonna Nzekwe (285) both were fourth.

J.P. Wrobel (120), Drake Rennecker (132), and Ethan Strahan (138) all placed third for the Red Devils and will compete at Garfield Heights next weekend.

The OHSAA state playoff began on Monday and seven Chagrin Valley Conference teams opened the second season with a win.
00:02:21

A second-half surge led Perry to a 3-0 win over visiting Geneva in a Division II sectional semifinal at Alumni Stadium on Monday.

Crestwood needed sudden death penalty kicks to pull off an upset over Ravenna Southeast in a Division II sectional semifinal on Monday.

Orange and Hawken will be represented at the 2021 OHSAA State Tennis Championships next weekend in Mason, Ohio.
00:01:04