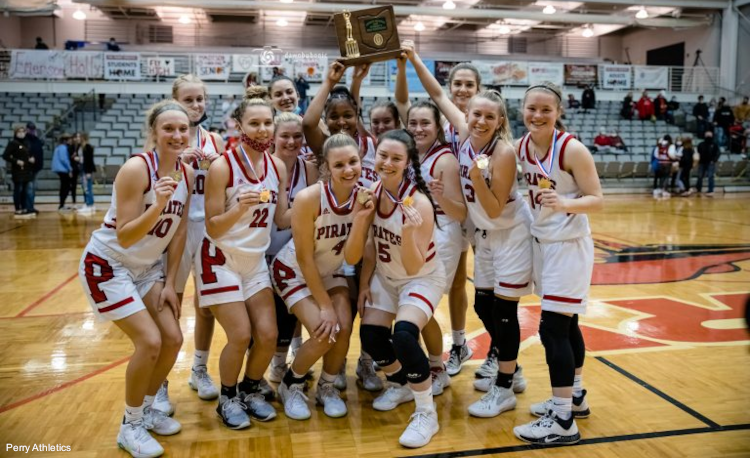 No amount of practice can prepare a player or coach for a last-second game-winning shot.

Sure, the players can line up at half court at the end of practice and launch shots until one tickles the twine, but simulating the intensity and anxiety of the real thing, that’s impossible.

Yet, Perry head coach Roy Infalvi, Jr. and senor Madyson Hacking were not only ready for the moment, they thrived in it in leading Perry to a 41-40 win over Salem in a Division II district championship game on Saturday.

“It was in the air for a while,” said Infalvi of Hacking’s game-winning 3-pointer as time expired. “A lot of things race through your head in that short amount of time–it’s really crazy how that works.”

Despite the heroic shot, Hacking hopes to avoid that situation in the future.

Perry had everything working in its favor early on as the Pirates led 14-0 after the first quarter.

Infalvi drew up a game plan to prevent Salem from scoring in transition and that strategy worked to perfection during the first eight minutes of play.

“We played half-court man and did a great job communicating and taking away what they wanted to do,” he said. “They didn’t even get off many shots in the first quarter and when they did, they were one and done. We rebounded, we took care of it, and offensively, we converted. We had a couple steals for layups and converted a little bit offensively. Things were going well.”

That all changed in the second quarter as the Quakers made some adjustments of their own and began hitting the shots they missed in the first quarter.

Everything that could go wrong in the third quarter did go wrong for the Pirates. Salem put together an 18-5 run to take a 30-26 lead—and all the momentum—into the fourth quarter.

Sharpshooter Elle Infalvi sat out most of the third quarter as she picked up her third foul early in the period.

“They picked up the pressure a little bit and, actually, I thought we did a good job breaking it and getting down but we just didn’t convert offensively,” Coach Infalvi said. “The game got up and down a little bit and we weren’t’ matching their points. They ended up taking the lead and we were able to then kind of settle down a lot offensively and we hit some big shots.”

Elle Infalvi drained a 3-pointer midway through the fourth that allowed Perry to retake the lead, 32-31. Margaux Jean followed with a 3 to push the lead to 35-31.

An Infalvi free throw made it 36-31 but Salem responded with back-to-back buckets before JaC’ana Anderson split a pair of free throws with 1 minute, 13 seconds left in the game to give Perry a 37-35 lead.

On the ensuing possession, Hacking was called for an offensive foul with 17.5 seconds remaining.

Salem capitalized on that turnover by hitting a 3-pointer for a 40-38 lead with 4.4 seconds remaining in the game.

That forced the Pirates to dig deep into their bag of tricks.

“We called a timeout off of that and it was one of the things where I had to make sure our girls were still focused on the play ahead because I knew we had a chance,” Coach Infalvi said. “It’s tough to overcome, there were only 4.4 seconds left, but we worked on this situation in practice and we’re going to run the play that we normally work on so we drew it up.”

Coach Infalvi was as ready as any coach could be in that situation.

Just six years earlier, when he was the head boys’ basketball coach at South, Infalvi found himself in a similar situation.

No Lake County team had beaten Mentor in recent history but the Rebels were in a position to do just that. Mentor took the lead late but Infalvi drew up a play and South executed it to perfection.

“We actually ran the same play we ran tonight and a kid came around the corner and got it,” Coach Infalvi said of Whitaker’s game-winner. “He pulled up from the half-court. We were down one and he swished it to win the game and beat Mentor. It was a huge win but it wasn’t for a district title.”

No, the district title game-winning 3-pointers seem to have been reserved by the Perry girls’ team.

Back then, Ellie Frazier scrambled for a loose ball and, from her third point of contact, she somehow cleared the ball to Jordan Schiano, whose long-arching shot from the top of the key banked off the backboard and in for the win.

Hacking was in eighth grade at the time and she was on the Perry bench for that miracle moment. Later, she watched Schiano’s brother, Drew, hit a pair of game-winners for the Perry boys’ team.

“All through middle school, I sat on the bench,” Hacking said. “I saw Coach Brindi (Kandel) draw the play up. It didn’t go as planned but Ellie Frazier somehow got the ball to Jordan Schiano. I felt it in that moment and then I watched her brother in two games make that shot, so when my turn came, I was like, ‘Oh my gosh, this is what it’s like.’”

First, Infalvi called a timeout to prepare the Pirates for what would come next. Salem followed with back-to-back timeouts, which seemed to play into Perry’s hands.

“It helped,” Hacking said of the extra time to calm her nerves and to prepare for the final shot. “We drew up the play, we were ready and kind of got our nerves in check and then they called the next timeout. You’re really anxious, ‘Am I going to get this game-winning shot? Who is going to take it? What is the other team going to do and how is this going to play out?’ You think of every scenario and by the third timeout, I was like, ‘OK, if the ball is in my hand, I trust my shot, I trust myself, I can make this shot. Whoever gets the setup will trust me to let it loose; let it fly.”

Salem pressured the inbounds pass but Jean found Marcela Rodriguez, who accepted the ball and immediately was double-teamed. She circled to her left to beat the pressure and then the Salem defender guarding Hacking moved up to add even more pressure.

That spacing allowed Rodriguez to move the ball up to Hacking near midcourt.

“When that girl left me, I was like, ‘Why are you leaving me? I know I haven’t hit a 3 in a little bit but this is the end of the game,’” Hacking recounted. “It just happened and I’m like, ‘I’m open, I’m open, give me the ball.’ She found me and I had to (make the shot). All props go out to Marcela, she handled that so well. I’m so proud of her.”

Hacking caught the pass just a few steps inside the half-court line. She dribbled to her right, took one step, and heaved the ball as high and as far as she possibly could.

With one bounce off the glass, the ball dropped through the net and Perry claimed its third straight district title.

“Salem came out and actually doubled the ball after we got it in,” Coach Infalvi said. “We had to ad-lib a little bit. Marcela did a great job of getting the ball in and Madyson got off a shot right inside the volleyball line. How fitting is it that our all-time leading scorer takes that shot and makes it for a district title.”

Infalvi led the Pirates with 11 points and Hacking’s 3-pointer gave her 10. Anderson contributed to the win with eight points, all from the free throw line, and Rodriguez and Jean both finished with six. Gigi Vicini added one point.

The Pirates advanced to Tuesday’s regional semifinal at Barberton, where they’ll play Poland Seminary at 8:15 p.m.

Hacking and the Pirates won’t forget the dramatic finish on Saturday but they will quickly refocus their attention on the next game.

“We get back in the gym (on Sunday), so we don’t get a day off, which is great,” Hacking said. “You want to get back into the gym and get back to work. I’m going to enjoy it tonight but when I wake up in the morning, it’s the next game.”