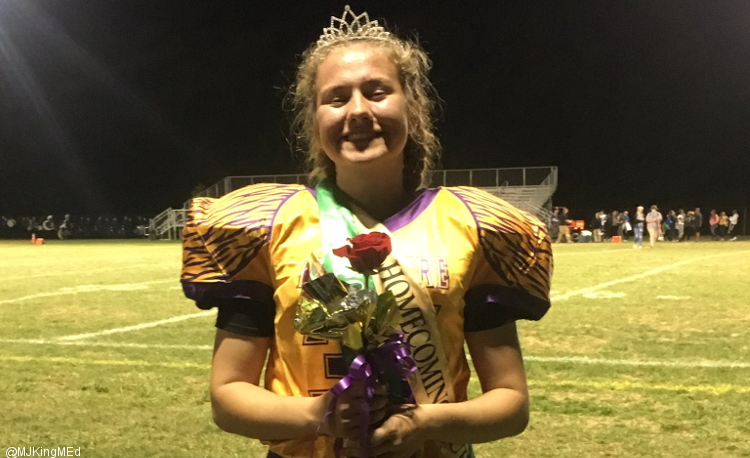 But then again, most Homecoming queens aren’t crowned wearing shoulder pads. Nor do they typically kick a pair of extra points during the contest on the field.

“It was really exciting when Coach (Josh) DeWeese called for me and Lexi (Boyk) handed me the tee,” Lillibridge said of her first point after try. “I was super nervous going out there but I felt confident when the whistle blew because I knew what I was doing. To also win Homecoming queen the same night was even more so exciting. I love my school and the people that I’ve grown up with. It was special.”

Lillibridge, a four-year member of Berkshire’s girls’ soccer team, and Boyk both joined the football squad this season and have alternated as the Badgers’ kicking specialist.

“I’ve wanted to kick for a while,” Lillibridge said. “I thought about it since freshman year and I had the okay from my parents, but I was just nervous until this summer. I just thought, ‘I know I have the leg for this, I can do it,’ and all the boys have been so supportive along with my soccer coach, Ian (Patterson). He’s been nothing but helpful since I started.”

Balancing her participation in soccer and football, along with her academic pursuits and social life, has been relatively easy.

“Football isn’t quite so demanding as soccer,” she said. “I mean, you have one game a week compared to two to three games a week. Lexi and I usually go up to kick a couple of times after every soccer practice and then call it a day. It’s been an easy balance.”

As for her rare accomplishment on Friday, scoring in a high school football game while also taking home the crown, Lillibridge hopes to inspire other young girls to follow their dreams, wherever they may take them.

“I hope to show younger girls that they’re powerful,” she said. “Nothing should stop them from doing what they want. The confidence to play with the boys, to be an absolute powerhouse and show everyone who’s boss, I hope I inspire more with me being on the football team more than I do with the crown.”