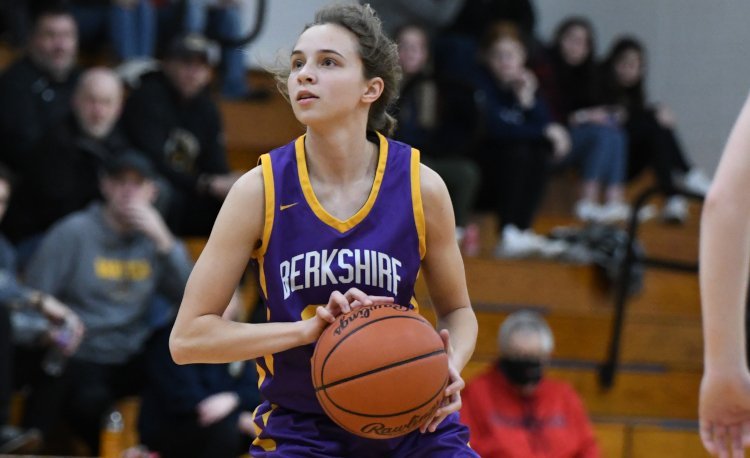 Berkshire’s loss to Garrettsville Garfield in a district semifinal on Wednesday closed out the record-breaking career of Badger standout Lydia Kastor.

A four-year starter, Kastor set several school records along the way to moving into fourth-place on the school’s all-time scoring chart. She finished her career with 1,018 points. Kayla Byler is Berkshire’s all-time leading scorer with 1,200 points, Meghann Wright is second with 1,109, and Kristin Chittle is third with 1,022.

She is just the fourth Berkshire player to reach 1,000 points in her career.

“It is very exciting to hit 1,000,” Kastor said. “It was probably my biggest goal coming into high school, and with COVID, I honestly did not think I would hit it so it was a complete shock.”

Kastor began her career as a JV player splitting time with the varsity squad.

Her performance quickly elevated her to the varsity squad and then the starting rotation.

COVID limited her to just 15 games during her junior season.

“We knew she was close coming into this season,” said Berkshire coach James Bosley. “She really had no idea and then our scorekeeper went through all the scorebooks and found a bunch of errors. Some played into her favor and some of them took a point or two.”

“That’s the result of the amount of work she put in during the summer every year,” Bosley said. “Not many kids work 30 or 40 hours a week in the summer.”

Reaching that milestone was an unexpected achievement for Kastor.

“It means a lot to be a part of that club,” she said. “It just shows that my hard work and dedication to the program has paid off. I don’t need my name on that list to know the impact I’ve had, but it’s a nice addition.”

“Lydia learned a lot from Lexi Boyk and Alyssa Schaefer about how to be a good teammate,” Bosley said. “They always supported her and she pays it forward now with all the freshmen we have, all eight of them. She has been nothing but encouraging for them and she’s already talking about bringing them in during the summer to work with them.”

Kastor did learn a lot from the players who came before her and provided her with the leadership she needed to develop a strong work ethic and she’s eager to leave the program in a better position than she found it as a freshman.

“I’ve spent the past four years building the program we have with Coach Bosley, on and off the court,” she said. “My teammates look up to me and I hope that they continue to put in the same effort that they have given me all these years. Those girls have seen me put in countless hours, and they’ve seen what I’ve accomplished and I hope they are willing to put forth that same dedication to whatever they want to do in life on and off the court.”