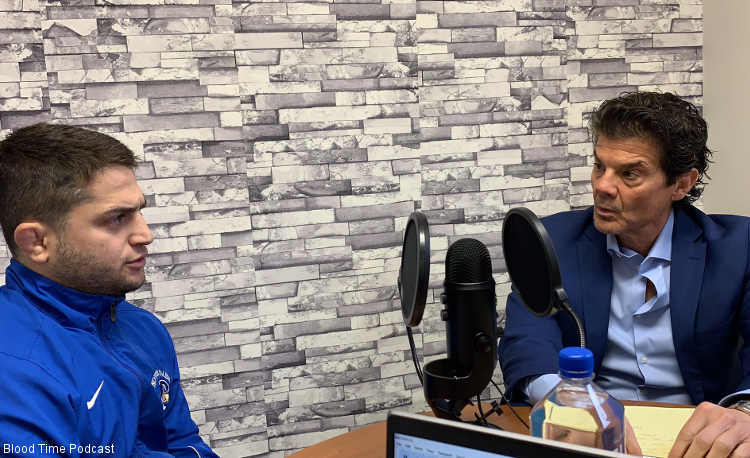 As a longtime wrestling coach, Peter Cimoroni has trained and developed countless champions. He also encountered athletes and coaches along the way who have their own inspiring stories to share.

The second-year Chagrin Falls coach recently debuted the Blood Time Podcast with the goal of sharing stories of athletes and coaches who have made an impact on the lives of others in sport, business and in life.

“It started probably about, a good 30 years ago when I started to hear stories about transforming kids and literally taking and saving lives through coaching,” Cimoroni said. “I took it very seriously. I was never a teacher, I was always a businessman. I was always in the business world seeing some of the, not the greatest activities and humanity out there in the business world, particularly in the 1980s. There were a lot of self-centered situations. You lost that camaraderie of the team.”

Through his time coaching at Beachwood and now at Chagrin Falls, Cimoroni never lost sight of the importance that player-coach relationship carried, not only in current times but also in the future as those athletes entered the business and coaching world.

Cimoroni’s desire to keep those inspirational stories has led to countless interviews and five podcasts with a new edition airing every other Thursday.

“When I started to hear some of those stories, we started to see the absolute importance, that blood time,” Cimoroni said. “That connection between the kid and the coach and those little nuances, sometimes it’s a kick in the butt, sometimes it’s a pat on the back and sometimes it’s a, ‘come on man, I’ve got you,’ but primarily it’s focusing on the right thing.”

The name is drawn not only from the sport of wrestling—blood time occurs when a match is stopped due to a wrestler bleeding—but also from the bond formed between a coach and athlete.

While the Blood Time logo depicts two wrestlers in action, the first five episodes indicate Cimoroni is following up on his desire to provide listeners with diverse viewpoints.

In Episode 2, Cimoroni interviewed Scott Safenovitz, a 25-year veteran of the Chagrin Falls police department who was a high school football player and wrestler at Beachwood. Cimoroni then tackled the business world in episode three by interviewing Barry Broome, the President and CEO of the Greater Sacramento Economic Council and another former standout wrestler at John Caroll.

The fourth episode featured Jason Thomas, a major in the United States Army who served two tours of duty in Fallujah.

“Some of the stuff he’s done, it just gives you chills,” Cimoroni said.

Thomas credits wrestling for helping him to develop the mental toughness to survive the day to day challenges serving in the military and in a war zone have presented.

“Wrestling, it’s who I am,” Thomas said during the podcast. “Everything I do, every day, the foundation was from wrestling. Obviously, you have your parents who build your core foundation but if I didn’t have wrestling, I wouldn’t be where I was today. Every situation I come into, when it’s a tough situation, the first thing that comes to mind is when we were in the wrestling room. Those times are some of the toughest you’ll ever have and mostly nothing will come close to that.”

Cimoroni’s goal is to allow each guest to share his or her own story of overcoming adversity and challenges and how a coach has helped transform the athlete into a successful adult.

“The ripple effect is stunning,” Cimoroni said. “It just doesn’t happen in a vacuum. Coaches affect kids and they affect other kids and they come back and affect you. It’s just incredible. I just have to get the stories out there and I’m not the only one. I’ve been getting texts and messages from a lot of other people.”

Cimoroni has leaned on his connections to the wrestling world to kick start the podcast but listeners soon will be treated to interviews with guests from all walks of life.

The Blood Time Podcast can be found on Anchor, Spotify, Youtube and MVPodcasting.com. Maverick Peters produces the show and Kevin Conwell is the videographer.