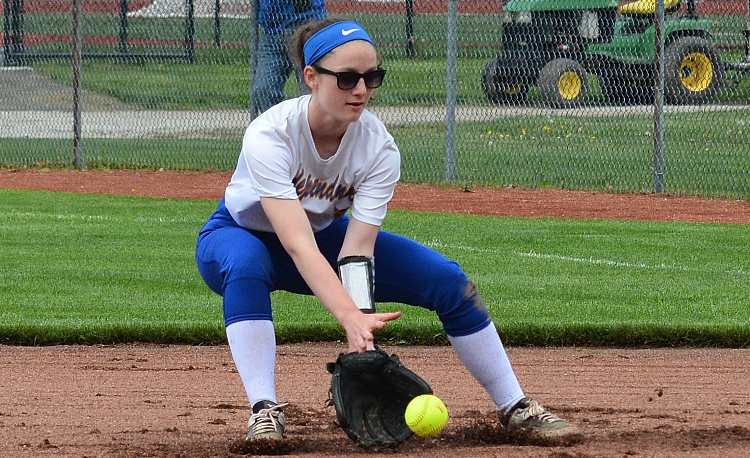 Independence rallied from an early deficit to defeat visiting Perry, 10-7, in a nonconference matchup of the Chagrin Valley Conference’s defending champions.

“That was big, especially after giving them three unearned runs in the first,” Independence coach Garry Moore said. “We didn’t know what we had in the beginning of the season but we kind of know what we have now and I’m excited. The older ones are doing what they’re supposed to do and the younger ones aren’t missing a beat. They’re not intimidated. They come up like they’ve been in those big games before. It’s very refreshing to see the older ones and younger ones come together.”

Moore’s senior leaders Sarah Piteo, Olivia Pallini, Jenna Suhy and Hayley Biondi combined for seven hits, six runs and three runs batted in and his newcomers also came up with key hits and clutch plays in the field and in the circle.

“It’s good to have the older and the younger,” Moore said. “We have the solid seniors in Sarah and Jenna and Hayley and Olivia. Olivia goes 4-for-4 with an RBI, Sarah had a big home run that just lifted the whole team. She crushed it and it lifted the whole team because they know with one swing of the bat it gets you right back into the game.”

Angela Vicini reached on a one-out error to start Perry’s first-inning rally. Emalee Sines then drew a two-out walk and Sydney Moon, Ava Strahan and Gigi Vicini hit back-to-back-to-back singles to give the Pirates a 3-0 lead.

Suhy and Pallini led off the Independence first with back-to-back singles and Piteo reached on a fielder’s choice. Ashleigh Porter then hit a sacrifice fly and freshman Jordan Kohut cleared the bases with a triple that knotted the score at 3-3.

Alyssa Pallini led off the Independence second with a walk and scored on Olivia Pallini’s single. Piteo then hit her second home run of the season to right center to give the Blue Devils a 6-3 lead.

“She crushed that ball,” Moore said. “Now you’re up 6-3 after giving up those three unearned runs in the first inning. That really lifted the team.”

Perry got one back in the third when Katie Pietrzak hit a one-out single, moved to third on Gigi Vicini’s double and scored on Faith Hartman’s sacrifice fly.

The Pirates regained the lead with three runs in the top of the fourth. All three runs were scored with two outs in the inning.

Sines and Strahan singled, while Moon and Pietrzak both doubled in the rally.

“The girls put together a lot of great at-bats coming away with 16 hits total,” Perry coach Joe Medlen said. “We just have to speed our game up a little and need to get used to playing defense behind Faith Hartman. As soon as we get into a defensive rhythm we will be good to go.”

Once again, Independence responded to Perry’s rally with one of its own.

Suhy and Olivia Pallini singled, Piteo drew a walk and Porter doubled. Kohut then singled, Morgan Pascarella reached on a fielder’s choice and Elise Nelson doubled home the third run of the inning to give the Blue Devils a 9-7 advantage.

Independence closed out the scoring with one run on two hits and a walk in the fifth.

Piteo, who finished 1-for-3 at the plate with two runs batted in, picked up the pitching victory for the Blue Devils. She allowed four earned runs on 12 hits.

Porter threw the final three innings for the Blue Devils. She allowed three hits and struck out three.

“Sarah pitched well,” Moore said. “Everything we threw, she threw well. Those girls can hit the ball; Perry has some hitters and they’re going to hit the ball on you. We changed it up and brought in our freshman, Ashleigh Porter, in the fifth inning to see something different and she did well. She shut them down for those last three innings.”

Olivia Pallini led the Blue Devils at the plate as she finished 4-for-4 with three runs scored and an RBI. Suhy, Porter and Kohut each finished with two hits for the Blue Devils.

Hartman went the distance for the Pirates. She allowed 10 earned runs on 13 hits.

“Faith induces a lot of ground balls and popups,” Medlen said. “We’re going to get back to our game in about another week and will hopefully peak going into playoffs, which I believe we will. We have great senior leadership that will lead us to where we need to go.”

Sines finished 3-for-3 at the plate with two runs scored and Strahan and Pietrzak also finished with three hits for the Pirates, both also knocked in three runs each.