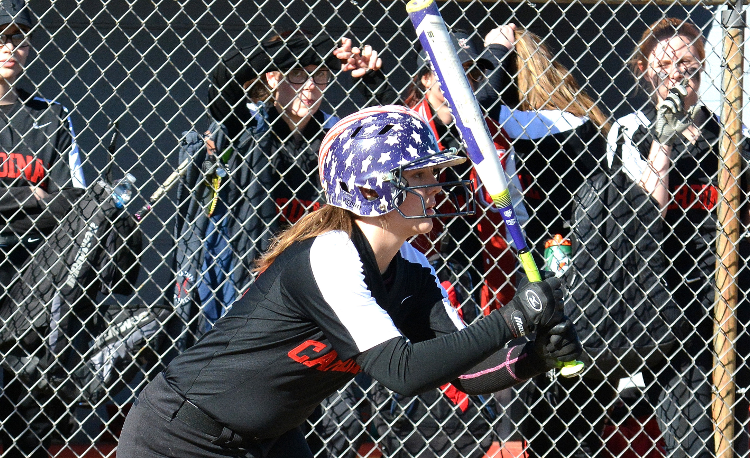 Faith Peters hit two home runs and Kayla Valentine added one four-bagger in leading Cardinal to a 22-12 win at Fairport Harding on Monday.

“They had a fun time,” Cardinal coach Dennis Ikeler said of the Huskies, who improved to 2-3 overall and 1-1 in Chagrin Valley Conference Valley Division play. “We had one bad inning there but they all stepped up and enjoyed the win.”

“Faith is my No. 1 key player and she was seeing the ball well again last night,” Ikeler said. “Her first home run last night, I could have held her up but I pushed her to home and she was able to get in there. That kid is just such a great player. Kayla has been struggling but we’ve been working with her and she caught onto it. She was seeing it really well coming in and hit two shots right down the third base line. I’m really proud of her.”

Cardinal scored six runs in the first and added five in the second to jump out to an 11-0 lead.

“That was phenomenal for us to get that kind of start,” Ikeler said. “The girls were seeing the ball well, hitting the ball well, running the bases well. They did a great job in the first couple of innings. We had one bad inning and gave up some runs, but it was a lot of fun.”

Hannah Hill and Sydney Hahner both pounded out three hits for the Huskies and Taylor Soltis ended the game with a pair of hits to go along with 11 strikeouts in the pitching circle.

Abby Miller, Lexi Christman and Haley Domen each collected a hit for the Huskies.

“That was Abby Miller’s first hit of the season and Haley Domen stepped up in there and did her part,” Ikeler said. “Hannah was up in there doing a great job. All the way around, everybody did a great job.”

Samantha Collins and Tori Nahorniak both finished with three hits for the Skippers.