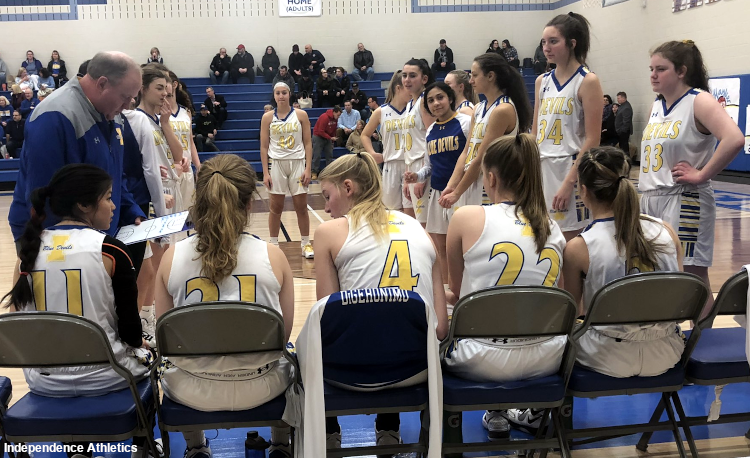 Independence’s girls’ basketball team had a lot to celebrate on Thursday.

Prior to their nonconference game against visiting Lincoln West, the Blue Devils recognized their five seniors and after their 67-20 win they celebrated closing out a perfect 21-0 regular season.

“It was enjoyable to send off a great group of girls,” Independence coach Mike Marcinko said. “I’m very fortunate to be able to coach them.”

Each of the five seniors started the game and contributed to the win.

Bella Shumay, who finished the game with two points, even sang the National Anthem.

“Tonight’s game was bittersweet for me,” Shumay said. “The coaching staff and my teammates have always made coming to practices and games a positive part of my day. Getting to start was exciting, but what made it special was doing it with the four girls that I’ve been playing with since seventh grade. I couldn’t have asked for a better ending to my regular season basketball career than singing the National Anthem, starting, and seeing Madison Stepanik hit a 3.”

Stepanik finished with 11 points and classmate Riley Wilson led all scorers with 18 points.

“It’s an amazing feeling to finish our regular season undefeated,” Wilson said. “We’ve grown over the past four years, adding pieces and improving our game, and to see it all come together is a great feeling.”

With the win, the Blue Devils improved to 21-0 on the season. The 21 wins and 21 wins in a row both are school records and the team is the first to close out the regular season without a loss.

“The key to success this season has been everyone understanding their roles and doing their best to perform individually and collectively,” Shumay said. “Although it’s fun to enjoy the wins, in order to be prepared for the next game, our energy is focused on the upcoming opponent and towards our personal and team goals. Our team chemistry this season has also been outstanding. Supporting one another, on and off the court, has made the program feel less like a team and more like a family.”

Independence now has a week off before it opens the postseason.

The Blue Devils drew the No. 2 seed in the Division III North Ridgeville District and will host the winner of the game between No. 7 Black River and No. 10 Oberlin in a sectional final on Feb. 22.

“Going into playoffs, we know we can’t get ahead of ourselves,” Wilson said. “We have to take it one game at a time and work hard every day at practice to get better.”