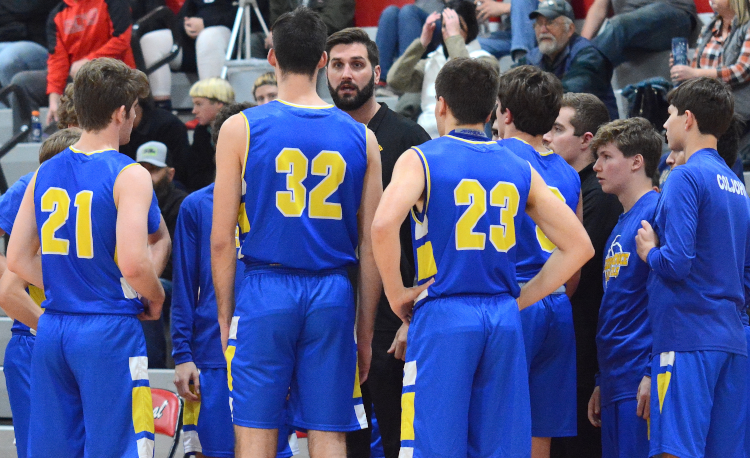 Independence entered Friday’s Chagrin Valley Conference showdown riding a six-game winning streak but the Blue Devils learned a valuable lesson before pulling out a 79-77 win over the Mustangs.

Grand Valley came out firing on all cylinders and led by double digits for most of the game before the Blue Devils rallied for their seventh straight victory.

“Grand Valley came out ready to play,” Independence coach Kyle Johnson said. “They knocked down shot after shot and they got after it on the defensive end. They changed some things up full-court and half-court against us and made us work tonight.”

Malik Mitchell made life difficult for the Independence defense.

He drained four 3-pointers in the first quarter as the Mustangs built a 25-16 lead and he added two more in the second quarter to push the Grand Valley lead to 45-31 at the break.

Mitchell would add two more 3s in the second half and finished with a team-high 29 points.

“We didn’t come ready to play,” Johnson said. “We had a terrible practice (on Thursday), so you could kind of see it coming.”

Fortunately for the Blue Devils, they implemented a new 1-3-1 defense in practice during the week and used it in the second half.

Independence outscored the Mustangs in the third quarter, 24-19, but entered the fourth down 64-55.

Wyatt Flynn scored 12 points in the third quarter and added 13 more in the fourth to lead the comeback. He finished with a game-high 31 points.

Eric Mitrisin scored 18 points, including the free throws in the final seconds that gave the Blue Devils the lead for good.

“We were in the double bonus and got a deflection,” Johnson said. “Eric went for a loose ball and they called a holding on one of their players. He came in and hit the free throws.”

Mitchell had one last shot but his long-range 3-point attempt missed the mark.

Adam Miklovic also scored in double figures for the Blue Devils as he finished with 11 points.

Independence improved to 10-4 overall and 8-2 in CVC play.

“I think our confidence was a little too high going into the game but I will say, we have a lot to improve on still,” Johnson said. “We are nowhere near where I think we can be. We’ve talked about it. We have to get better one game at a time and hopefully, we’ll develop better habits as the season goes.”