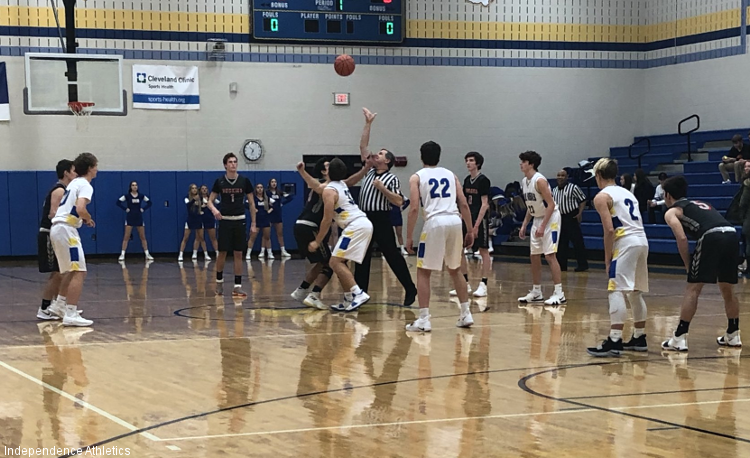 Independence got off to a hot start and never faded in a 69-40 Chagrin Valley Conference Valley Division win over visiting Cardinal on Tuesday.

The Blue Devils led 17-4 after the first quarter and maintained their intensity and focus throughout the game.

“We had lost three of our last four and in a couple of games we felt we could have walked away with wins,” Independence coach Hugh McMahon said. “The guys had a really focused practice on Monday and as a young team we were trying to take that next step and we shared the ball, played hard on defense and didn’t let up. We played the entire game, so I’m really happy with that.”

Six different players scored in the first quarter as the Blue Devils built their lead.

Independence used a team approach on defense as well.

“We were pressuring them and I thought we did a really good job of rotating and getting back,” McMahon said. “We did a good job of contesting any shot they did have but we did bail them out a few times with some easy fouls. That’s one thing young team has to keep working on and mature on. Slowly but surely, we’re getting there.”

Kyle Zygmunt led the Blue Devils with 16 points followed by Wyatt Flynn with 10.

“I liked how Kyle Zygmunt was looking to score at all times and he got hot in the second quarter and that carried over to the third,” McMahon said. “This was easily Wyatt Flynn’s best game. He was really active attacking the glass. It looked like he’s feeling comfortable out there. It’s great to see him back to his old self.”

“I know this is a team that can shoot the ball,” Coach McMahon said. “We just have to do the work before we get the ball to be ready to score and we worked on that in practice. It showed tonight as we hit 10 3-pointers. I’m really pleased with that.”