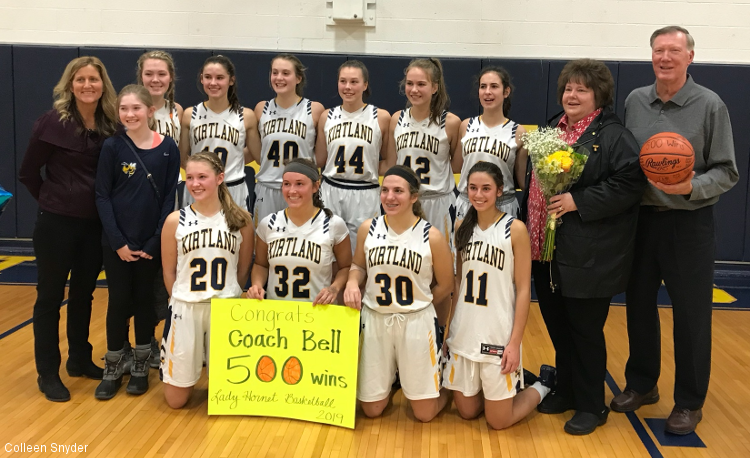 Freshman Grace Wolfe scored 10 of her game-high 15 points in the fourth quarter as Kirtland came from behind to defeat visiting Notre Dame-Cathedral Latin on Monday, 55-46.

The win was the 500th in Kirtland head coach Bob Bell’s 38-year career.

“It’s nice but I was more concerned with how the team played,” Bell said. “I’m happy for the girls. I think they we repressing offensively a little bit the last couple of games. We played incredible defense all three games and our turnover ratio has been way better than what you’d expect but the ball just wasn’t falling very well. Tonight, we managed to get a few shots in the basket. When the ball is falling, things always go better.”

Kirtland, who improved to 7-4 overall, snapped a two-game losing streak. The Hornets scored 38 and 34 points in those games and are 0-4 on the year when scoring 40 points or less.

“It was a big win for the girls, it meant a lot to them,” Bell said. “You could see the joy and relief on their faces now that they got that behind them. They won a good game against a good team that really plays a tough schedule. (NDCL) came in 5-5 but they played some really good teams.”

Lauren Snyder scored 10 of her 11 points in the second and third quarters as the Hornets began to work their way back into the game.

Wolfe took over in the fourth as she scored on four field goals and two free throws.

“It was very important to us that we were able to come back and get a win after suffering two losses prior to today,” Wolfe said. “We definitely wanted to win, not only for coach Bell’s 500th career win, but we needed the win tonight for ourselves to get our confidence back. After getting in foul trouble and having to sit most of the third quarter, I really just wanted to keep the intensity going that our team started building in the third quarter. They were truly giving it there all and I wanted to do so as well so that we could have the chance to come back as a team.”

Wolfe and Snyder both finished in double figures and Jenna Sayle added nine points, Lauren Lutz finished with eight, Amber Yurick pitched in with seven and Julia Camino and Macy McIntosh closed out the game with three and two points, respectively.

The Hornets outrebounded the Lions, 35-15.

“Lauren Snyder had a heck of a floor game and Amber Yurick played really well for us,” Bell said. “Lauren Lutz played great on defense and on the boards. She did an incredibly good job for us. She basically shut down their inside game all night. I was pleased with the overall effort.”

Kirtland travels to Wickliffe on Wednesday.