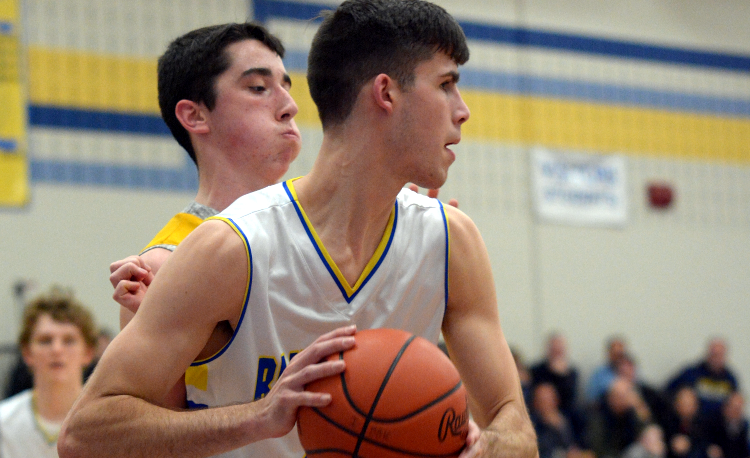 INDEPENDENCE—Something had to give when Kirtland traveled to Independence on Friday.

The visiting Hornets entered the game riding a seven-game winning streak while the host Blue Devils earlier in the week had pushed their own winning streak to eight games.

In the end, Independence made more plays down the stretch to beat the Hornets, 75-70.

“Hats off to Kirtland, they’re a very well-coached and disciplined team,” Independence coach Kyle Johnson said. “They play hard and they play fast the right way. They hit some great shots today. We were fortunate to get the win tonight.”

Kirtland led after the first quarter, 16-14, but the two teams traded the lead throughout the second quarter. A late and-one allowed the host Blue Devils to take a 31-30 lead into the break.

“We did a good job of getting some stops and scoring in transition but they have two guys they can really go to with Zygmunt and Flynn and they made some plays toward the end,” Kirtland coach Shawn McGregor said. “We got a little lax and gave up some second-chance points where they missed a shot and we didn’t get the rebound. I think that hurt us.”

Independence finished the night 18-for-21 from the free throw line with 11 of those makes taking place in the second half.

“That’s been our Achilles heel all year, our free throw shooting,” Johnson said. “We’ve been shooting around 55 to 60-percent. If you want to win tight ball games, you have to hit free throws and guys did that. More importantly, in the fourth quarter we got stops when we needed them and not only that, we rebounded. Our first shot defense in the fourth quarter was very good. We didn’t give up many second-chance opportunities and that was key for us.”

The Blue Devils also showed off their depth as six other players scored in the game.

“Everybody played their role today,” Johnson said. “Hats off to our team; we rolled nine deep tonight and everyone contributed in the way that they can. Nobody tried to be somebody else today. We’ve been talking about that, play your role and do what you can do to help our team and that was a great team win. All nine guys played very well tonight.”

While nine Hornets scored in the game, it was the near misses that hurt Kirtland in the end.

“When you’re playing good teams, you’ve got to finish plays down the stretch and we didn’t do that tonight,” McGregor said. “We missed free throws and they made their free throws. We missed open, uncontested layups and they made theirs. It’s just one of those things; they executed better and finished plays at the end of the game. The thing that hurt us the most was the second chance opportunities that they had. Flynn did a nice job of getting on the glass, along with some of their other guys, and they got some easy cutbacks.”

The Blue Devils must beat Richmond Heights on Tuesday to keep alive their hopes of winning the league title. Kirtland needs just two more wins or a win and a Wickliffe lost to win the Valley Division crown.