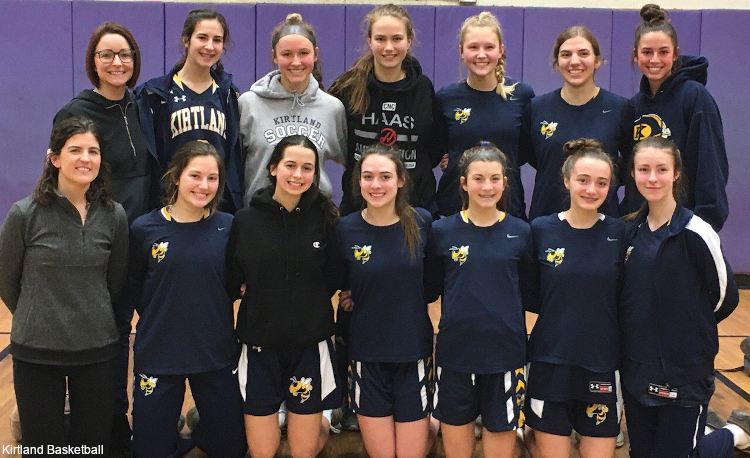 Kirtland’s defense wasn’t about to let an opportunity to clinch a league title slip through its fingers on Saturday at Berkshire.

The Hornets held the host Badgers scoreless in the second and fourth quarters on the way to a 47-13 win.

With the win, the Hornets improved to 13-4 overall and10-2 in the Chagrin Valley Conference Valley Division in Zele’s first year as head coach of the program.

“That is a reflection on how special these girls are,” Zele said. “(Assistant coach) Britt (Grimes) and I love being at Kirtland and having these girls in our lives. It’s more than a team. We consider them family and I think that’s why this transition went as smooth as it did.”

The win at Berkshire was just as smooth.

Macy McIntosh and Haley Coso both scored 10 points to lead the Hornets to the win. Reilly Greenlee added eight and senior captains Julia Camino and Lauren Snyder contributed with seven each.

“It means a lot to end my high school career with the title, especially after we came up short last year,” Camino said. “Coach has done a great job of making sure we’re prepared and ready for every game and we just go out there and play the best basketball we can. It’s a great feeling to see all our hard work pay off and it gives us the confidence we need going into the postseason.”

Snyder also was focused on reclaiming the Valley Division title this season.

“Coaching change is never easy, but the coaches this year have made this title a priority and it’s nice for coaches and players to be recognized for the hard work put in by all,” she said.

The Hornets host Cardinal on Tuesday.