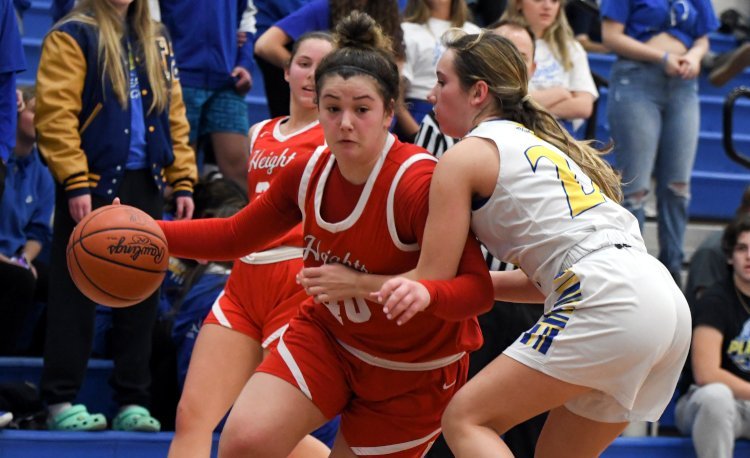 INDEPENDENCE–Tess Conroy has enjoyed the first few weeks of 2023.

The Cuyahoga Heights senior scored the 1,000th point of her career last week and on Wednesday, she scored a game-high 18 points to lead the Red Wolves to a 32-26 win at rival Independence.

Cuyahoga Heights trailed the Blue Devils in the first quarter, 10-3, before Conroy took over and scored seven of her 18 in the frame including a pair of free throws in the final seconds of the period to give the Red Wolves an 11-10 lead heading into the second.

“It was a really great team effort,” said Cuyahoga Heights coach Al Martin. “They came out strong and they are really competitive and really well-coached and really physical. They play the game the right way, so we knew we were in for tonight, but our girls were ready to play.”

The Blue Devils opened the game by hitting on their first three shot attempts and were 5-for-7 from the floor in jumping out to that 10-3 lead.

After that, the Blue Devils struggled to finish at the hoop.

“I think the early success kind of gave us a false sense of security,” said Independence coach Hugh McMahon. “I don’t think we were physical enough the rest of the game and they were. We’re normally a much more physical team than that, so that’s disappointing that we didn’t come out and play our style of play.”

Ava Galek drained a 3-pointer in the second quarter and Kayla Vallee and Conroy both hit field goals to send the Red Wolves into the break with an 18-16 lead.

Conroy scored all seven of Cuyahoga Heights’ points in the third quarter as the Red Wolves focused on shutting down the Independence offense.

Independence’s Emily Gibbons hit a 3-pointer and Paige Priebe scored five of her team-high nine in the fourth quarter as the Blue Devils cut the Heights lead to just four points, but Galek hit another clutch three to regain the momentum for the Red Wolves.

Conroy also split the Independence defense and finished with a key layup during the closing minutes.

Galek contributed to the win with 10 points and Reece Frank and Vallee both finished with two for the Red Wolves, who improved to 12-3 overall and 4-2 in the Chagrin Valley Conference Metro Division.

“I thought we defended great all night,” Martin said. “We came out in the second half and defended even better. We struggled taking care of the ball in the second half, and we didn’t get as many shots as we’d like, but when they cut it to four, Tess made that tough move in the paint in traffic. She worked really hard to get hers. I thought Lauryn Wilson played a great game. She played a ton of minutes because of all the injuries we’ve had, and she guarded a very physical girl.”

“We played hard, we just have to put it all together and we can be really good,” McMahon said. “We have to be physical and we have to play with passion at all times. That’s high school basketball, and if you don’t do it, you lose. Case in point tonight.”

Cuyahoga Heights’ win capped off quite a night for the Red Wolves, who earlier in the evening defeated the Blue Devils in wrestling, 48-21.

The Red Wolves won three of the five matches wrestled and collected five forfeits in knocking off host Independence on Wednesday, 48-21.

The Red Wolves opened the dual with Cooper Kucia’s forfeit win at 106 pounds and after a double forfeit at 113, Zander Mooney defeated Independence’s Manoli Fourtounis at 120, 7-1.

Independence reeled off four straight wins to pull ahead 24-9, but that lead wouldn’t last long.

Charlie Meyer won by forfeit at 126 and then Colton Franko pinned Noah Tokar at 132 in 1 minute, 36 seconds. Jonah Valenti then won by forfeit at 138 and Charlie Puklavec pulled off the most dramatic win of the night at 144 pounds.

Puklavec recorded the first takedown of the match but gave up a reversal to Kucia before scoring a reversal of his own after Kucia earned a two-point near fall.

With the match tied 4-4 at the end of the third period, Puklavec won the match with a takedown early in the overtime period.

Cuyahoga Heights bounced back with six straight wins to close out the match.

Zach Zoladz, Andrew Jakubczak, and Fletcher Sturgill won by forfeit at 150, 157, and 165 pounds, respectively, and Francis Connors won by fall at 175. Angelo Rocco collected a forfeit at 190, and Jeremiah Reed defeated Independence’s Tommy Erdman, 1-0, at 215. \