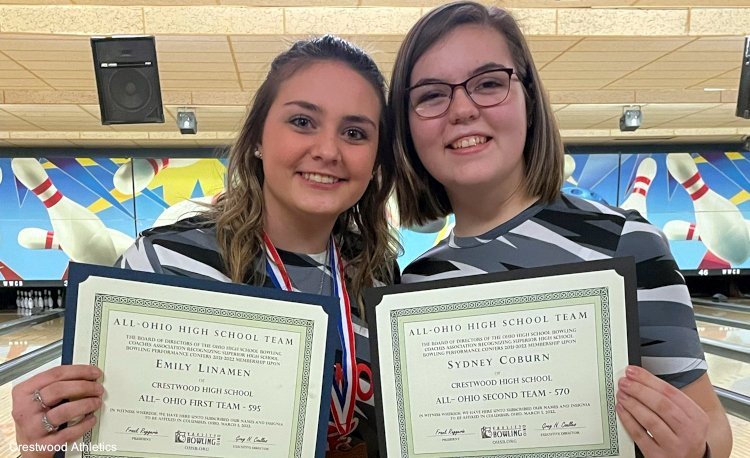 Crestwood junior Emily Linamen and senior Sydney Coburn both closed out the OHSAA state bowling championships as All-Ohioans on Saturday.

Linamen rolled a 595 to place fourth overall while Coburn finished 10th with a 570. Linamen earned first-team All-Ohio honors while Coburn was second-team.

“It’s an unbelievable feeling that can’t be explained,” Linamen said. “Out of 1,500 girls, I was the one percent to make it this far.”

Linamen opened the tournament with a 188 in her first game and then finished with a 192 and a 215.

“At first, I felt so nervous but I kept telling myself that I made it as far as you can go,” she said. “When I got a 188 the first game I just knew that I needed to relax, calm down, and play my game. Bowling is a mental game, you just have to relax and have fun.”

Coburn was pleased just earning a state berth but couldn’t be happier to have earned All-Ohio honors.

“I am extremely excited to finish the season the way I did,” she said. “Without great coaching and family support, I never would have made it this far. Making it to state was already a huge accomplishment for me, but placing made it even better.”

She struggled with the lane conditions in the first game and rolled a 166 but made the necessary adjustments to finish strong with a 212 and a 192.

“My first game was a struggle,” Coburn said. “I started with the wrong ball and was not getting the reaction I needed for the lane conditions. Switching in the fifth frame, I was able to reverse the path I was on and end the game on a high note giving me the confidence I needed for the next two games.”