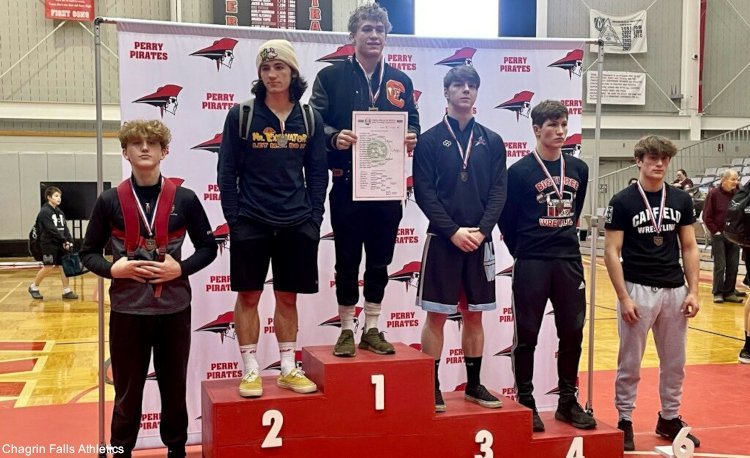 A total of 15 wrestlers from the Chagrin Valley Conference punched their tickets to the state championships with a top-four finish at one of three district tournaments on Saturday.

Four others finished fifth at the district tournament and will serve as a state alternate.

Orange’s TeAndre Allen, Chagrin Falls’ Sam Partain, and Berkshire’s Lucas Stoddard are headed to Columbus as No. 1 seeds after winning a district title on Saturday.

He won the 126-pound title at the Division II Perry District a pin, a technical fall, and two one-point decisions. Allen edged St. Vincent-St. Mary’s Bryce Skinner in the championship bout, 3-2, and is 10-2 on the year.

Partain improved to 33-3 with his four wins at 150 pounds at the Perry District.

He used three decisions to advance to the championship bout where he defeated Aurora’s Nic Willingham, 5-1, to become the Tigers’ first district champion since 1998.

He opened the tournament with back-to-back pins at 190 pounds and then edged Mogadore’s Tyler Knight in the semifinals, 4-0. Knight is a four-time state qualifier.

Stoddard closed out his district title run with a 3-2 decision over Southeast’ Jadyn Sapp, the 2021 district champion at 195 pounds.

Cuyahoga Heights’ Luke Torgerson finished as the district runner-up at 175 pounds. He won his first three matches by decision then fell to Garfield’s Keegan Sell in the championship round, 14-2.

Hawken’s Jacob Hlifka placed fifth at 144 pounds and will serve as a state alternate.