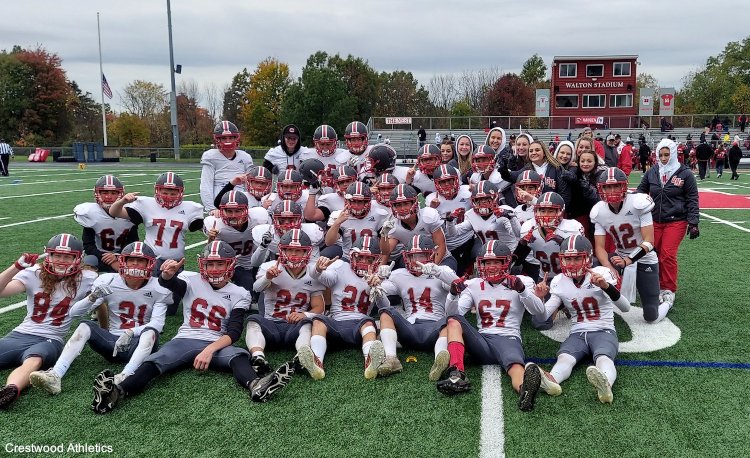 Crestwood coach Jack D’Amato took over the Red Devil program with a promise to play an aggressive brand of football and he backed it up on Saturday with a couple of risky calls that paid off in a 22-21 playoff win over visiting Berkshire.

The Red Devils trailed 14-0 at halftime but rallied to pull to within 21-20 with eight minutes left in the game. Instead of attempting a game-tying extra point, D’Amato called for a two-point conversion and his players executed the play and then held on to the lead to seal their first postseason win since 2015.

Berkshire took an early lead when Lucas Stoddard broke free on a 30-yard touchdown run and then caught a 61-yard TD pass in the second quarter.

The Badgers, who lost to Crestwood in the regular season, 50-7, held a two-score advantage at halftime.

“Stoddard is an absolute asset to Berkshire and he really was doing everything for them, him and Josh Brown,” D’Amato said. “They were able to do a lot of things. They’re a very well-coached team. For us, we can put (the first half struggles) on a lot of things like field conditions and that stuff. We’re more of an aerial attack and we were unable to run the ball, so that was a little difficult for us but we settled down in the second half and the kids came out swinging.”

Evan Daniels started the Red Devil comeback with a 75-yard touchdown pass to Jonas Honeycutt that cut Berkshire’s lead to 14-6.

The Badgers responded with a Brown four-yard touchdown run to push the lead back to double-digits at 21-6.

Louie Blasiole closed out the third quarter with a one-yard touchdown run that cut Crestwood’s deficit to 21-14.

Blasiole scored on an 11-yard run that pulled the Red Devils to within 21-20 and an extra point pending with eight minutes left in the game.

D’Amato felt his team had taken control of the momentum and he called in a two-point conversion that gave the Red Devils the lead for good.

“It was really awesome to see the kids keep fighting,” D’Amato said. “I’m really excited for the seniors that core group of kids that we have. It’s what we talk about all year long and it’s fighting and just keep swinging and keep getting after it, and really, that’s the first time in a little while that we’ve had to. The kids knew they wanted to win and move on so they knew they had to fight and keep swinging and finish.”

Daniels finished the game 7-of-15 passing for 156 yards and the touchdown pass. Blasiole ran for 110 yards on 25 carries with two scores.

“The message of us this week is that we’ve got nothing to lose,” D’Amato said. “We’re expected to lose this game, so why not give everything we have to try to ruin their season and continue ours?”