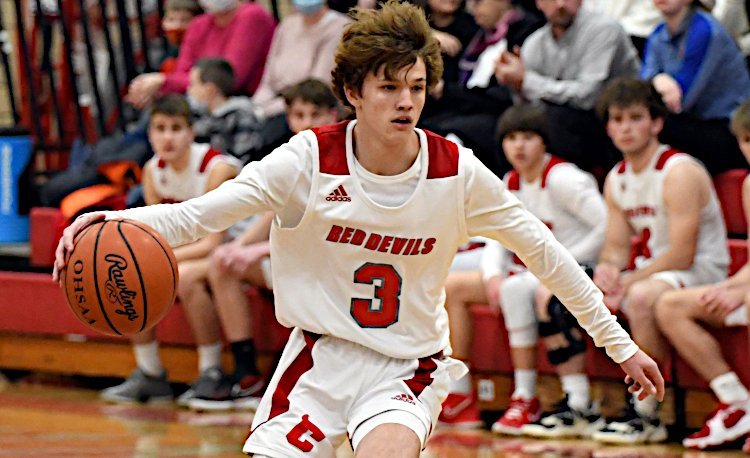 Good things come to those who wait.

That take on an old proverb certainly applies to the Crestwood boys’ basketball team, but the Red Devils were more than patient in waiting for their first win of the season.

After losing six games by five points or less on the way to a 21-game skid, the Red Devils closed out the regular season with a 56-52 win over visiting Springfield on Thursday.

“I think that speaks volumes of the leadership our seniors provided the entire year,” said Crestwood coach Josh Jakacki. “I don’t think our record represents our team. Our kids come to practice every day and they listen, they’re coachable, they battle, and the bench energy is phenomenal. Every game, our belief in each other and our culture is something that kept them going.”

Crestwood opened the season with a young but talented roster.

The Red Devils lost their first game at Field by one point. Four days later, they suffered a four-point defeat at Wickliffe.

As the losses mounted, the Red Devils never wavered in their belief in each other and the process dictated by the program’s culture.

“It would have been very easy for them to fold and give up hope and not fight,” Jakacki said. “In the last part of the season, we’ve been in so many games but we have such a young team.”

In mid-December, Crestwood lost to Berkshire by five points. Nearly a month later, the Red Devils took to the court for the first time since that loss to the Badgers and gave Kirtland all it could handle before falling by five points.

Both the Badgers and Hornets are in the hunt for the Chagrin Valley Conference Valley Division title.

More close losses followed but the Red Devils never gave up that hope.

Finally, they were rewarded with their first win of the season.

“It all kind of came together,” Jakacki said. “We made some shots and we handled pressure and made some free throws down the stretch. We were able to come away with a nice victory on senior night. I look forward to what the future holds for this program.”

Charlie Schweickert led the Red Devils with 21 points but it was his clutch free throws down the stretch that made the biggest difference.

Schweickert converted on 7-of-8 free throws in the closing minutes.

“I think they just kind of got tired of finding ways to give away wins,” Jakacki said of the Red Devils taking a lead and holding it until the end. “We drew up a set that we run a variation of but it certainly wasn’t something that we had run all year and they were able to execute that out of the timeout and kind of give us a cushion. I just can’t say enough about their willingness to do all the things necessary to continue to stay engaged and focused day in and day out.”

Johnson averages a team-best 13.1 points per game, but on Thursday, he contributed in other ways.

“This was arguably his most complete game,” Jakacki said. “I’m proud of him in the sense that he’s carried the weight of the program from a scoring perspective all year and as a facilitator, he trusted his teammates tonight and it allowed them to make some plays to take some burden off of him.”