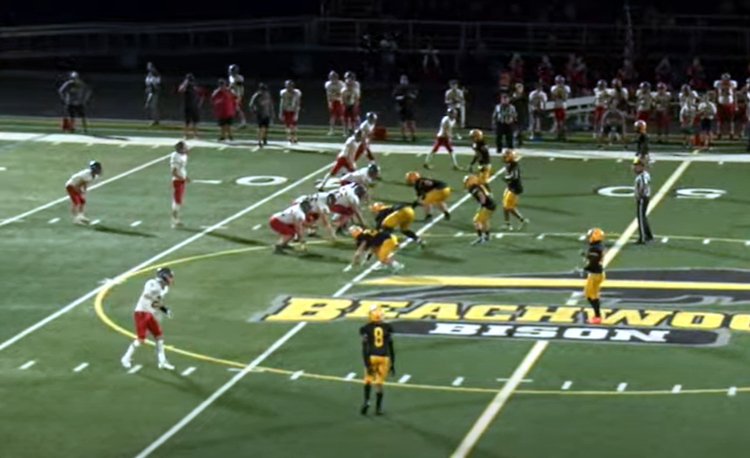 BEACHWOOD—Charlie Sommer’s 57-yard touchdown pass to Jonas Honeycutt was the difference in Crestwood’s 21-17 win at Beachwood on Friday.

The Bison led 17-14 when Sommer threw his second touchdown pass of the night with 3:09 left to play in the CVC TV Game of the Week.

“I’m just really proud of the way our kids kept fighting,” said Crestwood head coach Jack D’Amato. “We talk about fight all of the time. That’s part of our culture. It’s fighting for your brothers that play next to you and on the sidelines no matter what the circumstances are. They kept swinging.”

The Red Devils looked to add to their lead but Beachwood’s Marquis Pinkney had other plans as he picked off a pass and raced 65 yards the other way for a game-tying touchdown with 4:22 left in the opening quarter.

Beachwood took its first lead of the game with 9:00 left in the first half with a play that likely isn’t in the Bison playbook.

Pinkney threw a long pass that was picked off by Julian at the Crestwood 45 but before Julian could run toward the end zone Beachwood’s Jovon Kirby ripped the ball from his arms and ran 45 yards for a touchdown that left the Bison in the lead, 14-7.

Crestwood responded with a big play of its own when Sommer hit Honeycutt with a short pass near midfield. Honeycutt broke a tackle and raced into the end zone. The 74-yard scoring play tied the game with 2:05 left in the half.

“It was just a great team effort all the way around,” Honeycutt said of the win.

“Jonas Honeycutt, our star wide receiver, he was out the first four games but he came back this game and had both completions and a lot of yards and made good moves,” Sommer said. “On both plays, he just did the work. I got him the ball and he did the work.”

Beachwood regained the lead early in the fourth quarter when Gili Avitan drilled a 22-yard field goal with 9:10 left to play.

Crestwood’s defense held the Bison scoreless the rest of the game, which allowed the Red Devil offense the opportunity to leave Beachwood with a win when Sommer and Honeycutt connected again on a long scoring play.

Sommer completed 5-of-11 passes for 162 yards and two touchdowns to one interception. Blasiole carried 19 times for 41 yards and the score.

Pinkney led Beachwood with 180 yards of total offense. He completed 4-of-7 passes for 91 yards and a touchdown, and he ran 18 times for 89 yards. He also recorded the pick-six. Mar’Tez Pinkney carried nine times for 68 yards.

With the win, Crestwood improved to 2-3 overall and 1-1 in the Chagrin Valley Conference Valley Division. Beachwood dropped to 1-4, 0-1.