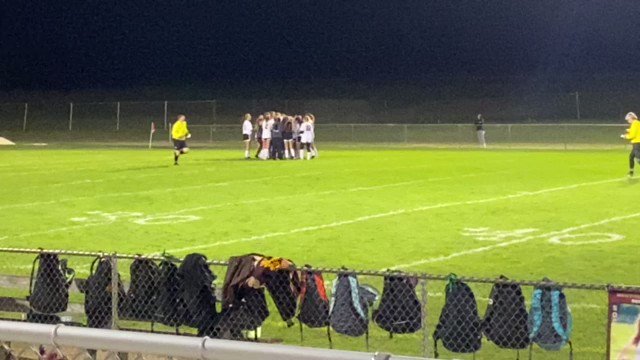 Crestwood senior goalkeeper Kylie Krupp had a decision to make on Monday.

She could attend the Harry Styles concert in Cleveland or skip the show to compete with her Red Devil teammates in their postseason opener at Ravenna Southeast.

Krupp opted for the latter and that move paid off as she contributed to Crestwood’s 5-4 shootout win over the higher-seeded Pirates.

“I decided to stay for the playoffs because I knew it would be a good game and I’d rather celebrate with my team over anything,” Krupp said.

Crestwood, the No. 16 seed in the Division II Akron 2 district, played a scoreless first half but the Red Devils had their opportunities but had nothing to show for it as the game was scoreless after 40 minutes.

“The first half was going really well,” said Crestwood coach Aaron Marshall. “We were moving the ball well but we couldn’t find the back of the net. Our defense held strong. Ava Mory, my senior captain, was playing sweeper so she was the last line of defense. She wasn’t letting them have anything.”

The Red Devils broke that scoreless tie seven minutes into the second half when junior forward Reagan Mory found freshman midfielder Alyssa Hallis, who buried the ball in the net for a 1-0 lead.

“Every opportunity we had in the first half, we’d be very, very close but it would never pan out to a goal or a shot on the goal. Finally, it broke through for us in the second half,” Marshall said. “We had to play our game and slow the ball down in our minds to be able to find people and not just pass into space to get it off of our feet, but to pass it with a purpose and the girls started to do that.”

That lead was short-lived as the Pirates scored the equalizer five minutes later.

With the game on the line, both defenses amplified their intensity, and the 1-1 score held throughout the rest of regulation, overtime, and double overtime.

Penalty kicks would decide the outcome, but even then, neither team could pull away.

The first set of PKs resulted in a 3-3 tie with Ava Mory, Gracie Schweickert, and Ava Julian all converting their shots into goals.

Southeast scored on its first attempt in the Sudden Death PK round but Hallis responded with another successful shot to force another try for both teams.

Krupp recorded a save to set the Red Devils up with a potential game-winning shot.

“It was very exciting, but the closer it got down to the PKs, I started to get nervous,” Krupp said. “I’ve never been in that situation with PKs. I was just happy that I could help my team advance in the playoffs senior year. I knew we would win once I had that last save. Then Bella Leister was up to kick right after to have a perfect kick.”

Leister, a junior, lined up her shot and delivered the game-winner.

“It was really exciting,” Marshall said. “We had a senior keeper in tonight and she ended up having three blocked saves, which was outstanding. As a coach, it’s really great to see your players work so hard in the game. We felt the whole game long that it was going to be our game but we just couldn’t get on the upper hand of it. To be able to come out on top there with those PKs, it was a surreal setting. It’s something I know the girls and myself are going to forget.”

As a high school player, Marshall was part of two games that were decided by penalty kicks. This was his first experience with PKs as a coach.

“It was definitely a stressful situation but these girls did it,” he said.

With the win, the Red Devils advanced to the sectional championship game at West Geauga on Thursday.

Crestwood has two days to prepare but after a physically and mentally challenging game on Monday, the Red Devils will have to ease their way into preparing for the sixth-seeded Wolverines.

“I told them, (Tuesday) is going to be a look at what we did well and work on things we need to work on,” he said. “After tonight, those who played most of the game, you almost played a game and a half and your stress level is high after playing for almost 3 1/2 hours. It was a good win, a great win, but we’ve got work to do.”