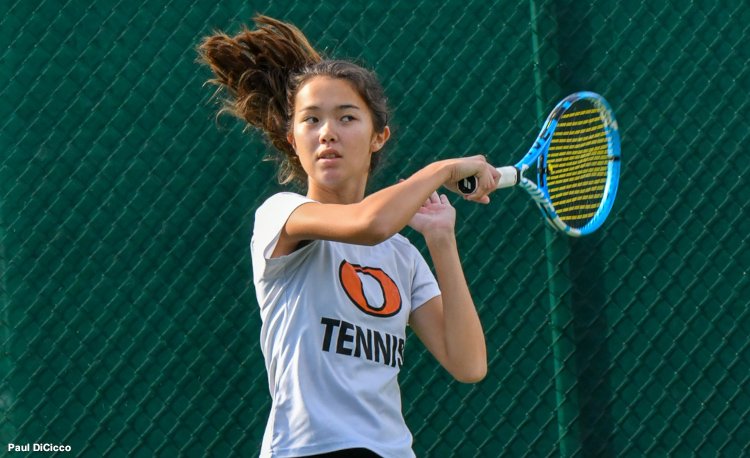 Orange and Hawken will be represented at the 2021 OHSAA State Tennis Championships next weekend in Mason, Ohio.

Nyborg opened the district tournament with a 6-0, 6-0 win over Boardman’s Allison Zion and then beat St. Vincent-St. Mary’s Andie McKnight, 6-0, 6-2.

Hawken will send two doubles teams to the state tournament.

Hayley Garber and Eliana Yang will make their second trip to the state tournament after finishing 0-1 in 2020.

Garber and Yang won their first two matches at the district tournament in dominating fashion but fell to eventual district champions Ally Mills and Kate Mills of Hathaway Brown in the semifinals, 6-2, 6-2. They bounced back with a 6-4, 6-3 win over Hathaway Brown’s Alice Lin and Alex Wolfe, 6-4, 6-3, in the third-place match.

Hawken’s Beatrice Hardacre and Anjali Jawa will make their first appearance at state after finishing fifth at the district tournament.

The Hawken duo opened the tournament with a 6-0, 6-3 win over Manchester’s Ella Burris and Emily Le and then fell to Mills team from Hathaway Brown in the quarterfinals, 6-0, 6-0.

Hardacre and Jawa kept their state tournament hopes alive with a 6-0, 6-0 win over Ursuline to reach the fifth-place match. There, they beat Chippewa’s Ally Murphy and Kate Harlan, 7-5, 6-3.

The state tournament will be played on Oct. 22-23 at the Lindner Family Tennis Center in Mason.

Click here to review the brackets when they are made available.