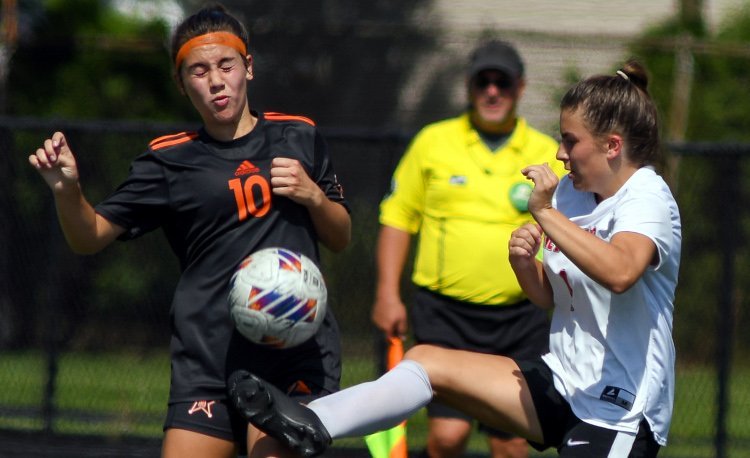 Frank gave the Red Wolves a 1-0 lead in the eighth minute and Villanueva finished off a corner kick with just 14:42 left in the game. Frank added her brace at the 7:40 mark.

“We’ve played North almost every year for the last 10 or 12 years and they have some great, young talent there,” said Cuyahoga Heights coach Christy Zawadzki. “Those girls look like they’re having fun and in prior years, it just wasn’t that way, so shout out to the coaches over there. They have done a great job.”

Frank’s first goal was set up by Sierra Wise, who dribbled through the heart of the Ranger defense before sending a touch-pass to Frank to finish off.

The Rangers then took control of possession but were stone-walled by Heights keeper Kayla Vallee.

“She’s been huge for us this year,” Zawadzki said of Vallee. “She didn’t always believe in herself but I said, ‘You’re a catcher in softball and this is a bigger ball, you can handle it.’ Each game that goes by, she gets more and more confident. She’s not really afraid of much, like a catcher’s mentality, and she can’t afraid of anything. She’s done a really good job of getting those balls that a lot of people wouldn’t get to.”

Cuyahoga Heights, who improved to 6-1, came out of the break and shored up their passing to maintain possession for the bulk of the final 40 minutes.

“In the first half, it was kind of like kickball, which we always try to work on in practice to not play kickball, but that’s what kind of happened in the first half,” Zawadzki said. “We talked about making sure we’re stringing together passes and going to spaces and they did much better at that in the second half.”

North wasn’t without its chances.

Kailey Minch bounced one off the crossbar and the Rangers had multiple near misses on corner kicks and run-outs.

Heights secured its shutout in the final moments when Vallee turned away a Morgan Bell free kick.

“There’s a physicality I don’t think we’re always ready to step to sometimes,” said North coach Rick Sirl. “We get knocked out of our game sometimes. There are so many things going right, but it’s frustrating sometimes. We had a free kick at the end and Morgan Bell hits it like from 45 yards out and right in the upper 90 and the keeper just gets a hand on it. It was a beautiful kick right over the top of the wall and you look at moments like that, you can’t hit it better, it was just a goalie who made a great save.”

Despite allowing the early goal, North played well in the first half in setting up its offense, distributing the ball, and setting up goal-scoring opportunities.

The Rangers, who fell to 3-3-1, struggled to find that consistency in the second half but the Rangers have come a long way in Sirl’s third year guiding the program.

“In our first year, we worked on technical development, just getting the kids to be able to trap and pass correctly, and then in the second year, we were really working on the system,” Sirl said. “This year, it’s starting to come together where from the back to the midfield, we’re doing great. Now we’re just working on finishing runs and how we’re going to move things up top. It’s always hard to come in and fix everything all at once; it’s a process and I think we’re getting there. We have the tools up top to do it.”