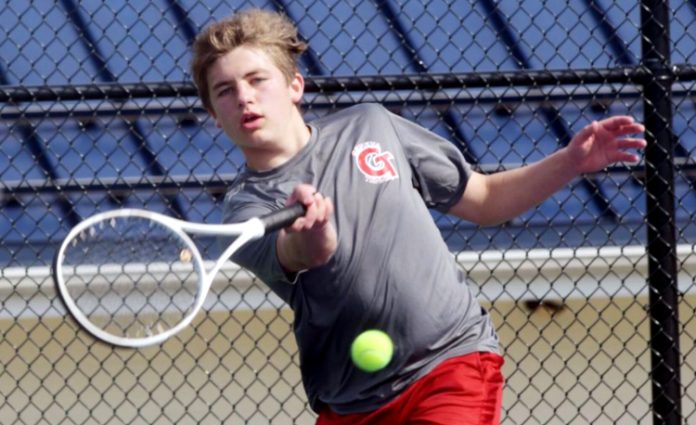 All statistics incurred during the week ending Sunday, April 11. 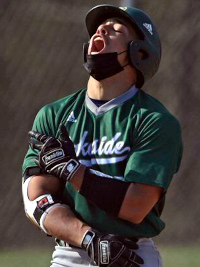 Name: Daniel Garcia
School: Lakeside
Grade: 12
Stats: Batted .600 (6-for-10) with one double, two triples, one home run, two walks, five runs scored, and eight runs batted in
Coach’s Quote: “Daniel had a great week at the plate for us,” said Lakeside coach Jared Sziber. “He has shown a knack for getting clutch hits all season for us and it continued with a walk-off triple in extra innings against Geneva. Daniel breathes baseball and works so hard for everything. He has grown a tremendous amount as a player over the last few years, and this is due to his amazing work ethic and attitude. He is the first one to congratulate a teammate and does not let a poor at-bat kill his spirit. He is the heartbeat of our team and it’s been a pleasure to see the success he has had.” 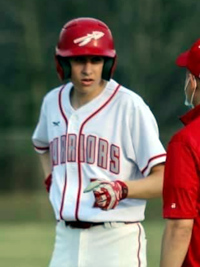 Name: Logan Kray
School: Edgewood
Grade: 9
Stats: Batted .750 (9-for-12) with two doubles, two RBI, five stolen bases, a 1.702 on-base percentage, and a .917 slugging percentage while hitting .500 with runners in scoring position
Coach’s Quote: “Logan has been squaring up the ball pretty much all season,” said Edgewood coach Jeff Barger. “He has been one of our top hitters since our first game. This last week, he was on fire. Even his outs were hard-hit balls. He’s also played a stellar first base. For a freshman, he shows no signs of being overwhelmed.” 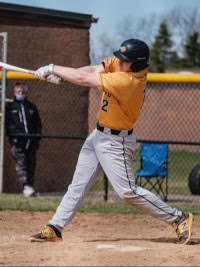 Name: Austin Muttillo
School: Beachwood
Grade: 12
Stats: Batted .500 (4-for-8) with four runs batted in; Allowed just one hit and one earned run with seven strikeouts in a seven-inning complete game; also posted a save
Coach’s Quote: “Austin had a big week for Beachwood, both on the mound and at the plate,” said Beachwood coach Andy Pohl. “He’s a four-year varsity team starter who strives to get better daily and takes pride in being a great teammate. The best thing about Austin is that he is about team first, individual accolades second.” 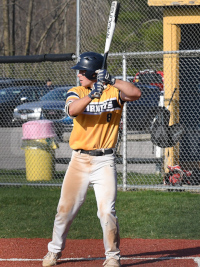 Name: Reese VanArnhem
School: Kirtland
Grade: 12
Stats: Batted .625 (10-for-16) with three doubles, a home run, seven runs scored, nine RBI, and seven stolen bases; four multi-hit games, one extra-base hit in all four games
Coach’s Quote: “He had an incredible week,” said Kirtland coach Luke Smrdel. “One of the biggest spots we had to fill in our lineup from 2019 was the leadoff spot and Reese has solidified that spot for us this year.” 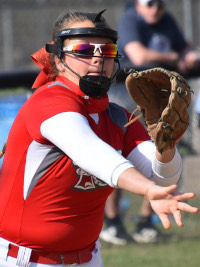 Name: Heather Farr
School: Edgewood
Grade: 12
Stats: Batted .750 (15-for-20) with three doubles, one triple, and two home runs with 11 runs batted in, zero strikeouts, and four stolen bases
Coach’s Quote: “She has played a solid third base for us this year,” said Edgewood coach Joel Laughlin. “As a senior, she’s been a leader on and off the field. In the classroom, she carries a 3.77-grade point average. She signed her letter of intent to go to Thiel College to play softball after she graduates. She is a captain on the softball team.” 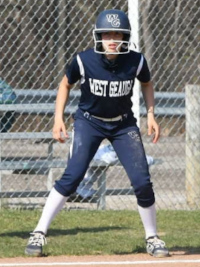 Name: Frankee Flesher
School: West Geauga
Grade: 10
Stats: Batted .750 with three doubles, one triple, one home run, 10 RBI, three walks and three stolen bases
Coach’s Quote: “Frankee Flesher is a player that has all five tools and is our starting catcher,” said West Geauga coach Bob Leppla. “With her speed and athleticism, she can play anywhere and be the best player at that position. Frankee can hit for power and RBIs, as her stats show. She is all-around a total team player.” 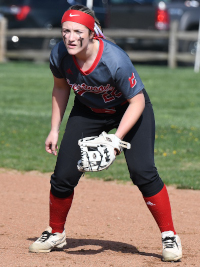 Name: Maci Head
School: Crestwood
Grade: 12
Stats: Batted .631 (12-for-19) with two doubles, one triple, four home runs (two in one game), and 11 RBI
Coach’s Quote: “Maci has been the anchor as our cleanup hitter,” said Crestwood coach LeRoy Moore. “She has a keen eye for the strike zone (with only two strikeouts in 77 at-bats as a sophomore in 2019). This past week, she had three games in a row in which she sent a ball over the fence. For the week, she led the team with 11 RBI. When Maci is in the batter’s box, I make sure I take a few extra steps back in the coach’s box at third.” 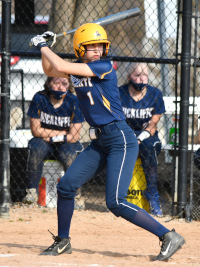 Name: Laylah Ruscin
School: Wickliffe
Grade: 10
Stats: Batted .800 (8-for-10) with four doubles, a triple, one home run, four runs batted in, six runs scored, and three stolen bases, as well as a 1.000 fielding percentage with six putouts
Coach’s Quote: “After a slow start to the season, Laylah has been on a hot streak this past week,” said Wickliffe coach Marlana Mucciarone. “Offensively, she has been hitting frozen ropes to the gaps allowing her to have six extra-base hits, including an inside-the-park home run. As our leadoff, she really puts the momentum in our favor when she gets on base from the start. Once on, she is a very good base runner and will use her speed to put pressure on the defense.” 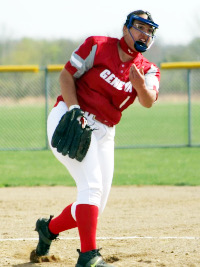 Name: Daliz Alvarez
School: Geneva
Grade: 11
Stats: Struck out 16 batters in 10 innings; batted .636 (7-for-11) with two doubles, one triple, and six RBI
Coach’s Quote: “Daliz put on quite a performance for us this week,” said Geneva coach Eleshia Pitcher. “She was not only strong from the plate but also stepped up on the mound and made some outstanding catches in center field this week. She has quickly become a team leader and is always willing to help out wherever she is needed.” 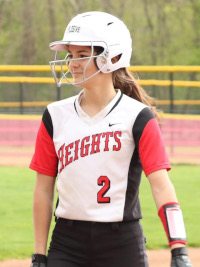 Name: Julia Harris
School: Cuyahoga Heights
Grade: 12
Stats: Was 5-0 with 41 strikeouts in 26 innings pitched; allowed just two earned runs on 15 hits with four walks
Coach’s Quote: “Julia has been the backbone of this team for the last four years,” said Cuyahoga Heights coach Kyle Manfredonia. “She is pitching at a very high level and has been leading the team on and off the field.” 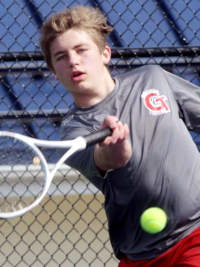 Name: Isaac Riddell
School: Geneva
Grade: 9
Stats: Won five matches at second singles
Coach’s Quote: “Isaac has been a pleasant surprise for us,” said Geneva coach Scott Torok. “Originally slated to fill the third singles spot, he has been thrust into the second singles spot and has handled it very well.” 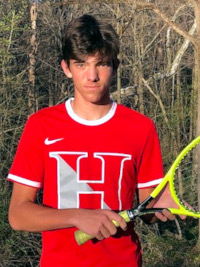 Name: Finn Rourke
School: Hawken
Grade: 11
Stats: Was 3-0 on the week (1-0 at first doubles, 2-0 at second doubles)
Coach’s Quote: “Finn was a great utility player this week and filled in the gap in three big wins at doubles,” said Hawken coach Brian Smallwood. “He’s a great athlete with good hands for doubles.” 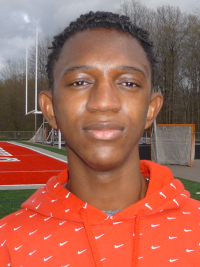 Name: Christian Anderson
School: Hawken
Grade: 10
Stats: Won the 200-meter (23:17) at George Gross Invitational; finished second in the 100-meter (11.40) at the Ned Weingart Relays; also the leadoff runner for Hawken’s winning 4×100 relay at the George Gross meet with a split of 11.2
Coach’s Quote: “Christian is competing in his first track season after missing last season due to COVID,” said Hawken coach Jim Farroni. “He has tremendous potential in the sprint events. Both of his races mentioned above were photo finishes, where Christian has shown the talent for a strong final push and lean at the finish line. Christian was also a member of the winning 4×100 relay at the George Gross meet.” 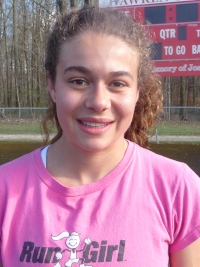 Name: Julianna Metz
School: Hawken
Grade: 12
Stats: Won the 800-meter run (2:25.78) at the George Gross Invitational; 10 won the 3200-meter run (11:55.59) at the Ned Weingart Relays; also the leadoff runner for Hawken’s winning 4×800 relay at the Ned Weingart meet.
Coach’s Quote: “Julianna is a stalwart of Hawken’s strong track and cross country distance teams,” said Hawken coach Jim Farroni. “She is a very hard worker at practice, being a great example for our many younger runners. Julianna is working hard to improve her turnover and speed, which helped her to run her personal best open 800 last week. She is looking forward to having her best track season ever.” 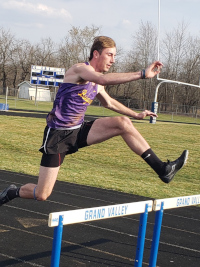 Name: Dakota O’Dell
School: Berkshire
Grade: 12
Stats: Placed first in two events at Grand Valley and at East Canton placed third in two events and seventh in a third
Coach’s Quote: “After a successful soccer season playing goalie, I was able to talk Dakota into coming out for track to hurdle and high jump for the first time since seventh grade,” said Berkshire coach Aimee Green. “This week, his newly acquired skills and improvements landed him some big PRs and places at East Canton. Dropping three seconds in the 300-meter hurdles, Dakota won his heat and ended up third overall. He also improved in the high jump and made the finals for the 110s, placing seventh. We are looking for some great things for Dakota as the season progresses.” 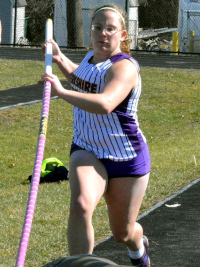 Name: Dana Shale
School: Berkshire
Grade: 12
Stats: Place first in the pole vault at the East Canton Invitational by clearing 10-feet, 4-inches, a new school record
Coach’s Quote: “I can’t say enough about Dana’s passion for vaulting,” said Berkshire coach Aimee Green. “She has been working three days a week at Spire to improve her technique and Saturday at the East Canton invite, it all paid off with the first of many PRs and school records to come. After clearing 9-9 indoor, we all knew she had big things in her, and we can’t wait to see where this will lead her.”