All statistics incurred during the week beginning Aug. 19 and ending August 25. 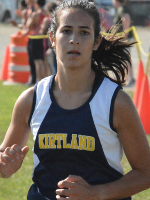 Name: Reilly Greenlee
School: Kirtland
Grade: 10
Stats: Placed 11th at the Berkshire Early Bird Invitational and moved into No. 11 all-time at Kirtland
Coach’s Quote: “Reilly is a double-sport athlete in the fall for Kirtland and made it to regionals last year in cross country and is hoping to build on that good freshman season this year,” Kirtland coach JP Moran said. “She has been working hard all summer and during each practice. She is very focused this year on her goals.”

Name: Lydia Randolph
School: Edgewood
Grade: 11
Stats: Won the Berkshire Early Bird Invitational with a time of 19:26, the third best time in school history
Coach’s Quote: “Lydia has worked extremely hard this summer with the expectation of being the No. 1 girl on her team,” Edgewood coach Steve Hill said. “After following in the footsteps of Bailey Roberts her first two years, it is Lydia’s team now. She has the willpower and determination to have much success this year.”

Name: John Steimle
School: Grand Valley
Grade: 12
Stats: Finished fifth at the Berkshire Early Bird Invitational with a time of 16:16
Coach’s Quote: “John has started off his senior year with a very strong performance,” Grand Valley coach Kurtis Fisher said. “He led his team and the boys stepped up to follow him.” 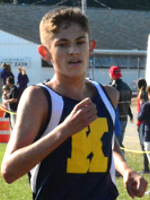 Name: John Sayle
School: Kirtland
Grade: 12
Stats: Placed 13th at the Berkshire Early Bird Invitational, his first-ever cross country meet, and moved into sixth place all-time at Kirtland
Coach’s Quote: “John has been running all summer and working extremely hard in order to come out for cross country this year and have some success,” Kirtland coach JP Moran said. “His workouts have been going really well and the times he has been running at practice predicted that he could run a really fast time on the course, and he embraced the challenge of his first meet and surprised himself and others.”

Name: Jimmy Johnston
School: Edgewood
Grade: 9
Stats: Carded a 42 in a match
Coach’s Quote: “Jimmy is playing consistent golf this season and is a freshman playing No. 2 on the varsity squad,” Edgewood coach Chris Juncker said. “This week he shot a 42 at Chapel Hills Golf Course and was second overall in the match. He works very hard and I’m sure he will continue to improve and be an integral part of the team.” 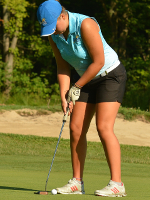 Name: Allie Ksiazka
School: Independence
Grade: 11
Stats: Shot 36 and 41 in two dual matches and a 98 at the Blue Devil Classic
Coach’s Quote: “Allie had a great week and very strong start to her season,” Independence coach Karl Schuld said. “She is driven to succeed and I know she will continue to improve as we get closer to the postseason. Allie has become a very good golfer in a short period of time.” 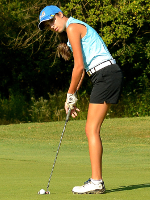 Name: Morgan Pascarella
School: Independence
Grade: 11
Stats: Shot a 36 in a win over Hawken and a 39 in a win over Chagrin Falls; shot a team-low 85 at the Blue Devil Classic
Coach’s Quote: “Morgan has worked so hard this offseason to improve her game,” Independence coach Karl Schuld said. “She has very high expectations for herself and it is nice to see the hard work show on the course.”

Name: Ella Wong
School: Hawken
Grade: 9
Stats: Averaged 39 in three league matches
Coach’s Quote: “Ella is a strong player but also her self-awareness and strong work ethic make her a leader on our team as a freshman,” Hawken coach Jennifer Creech said. “She knows how to bounce back from a bad hole and continues to learn and wants to get better.”

Name: Dillon Myers
School: Edgewood
Grade: 12
Stats: Scored two goals
Coach’s Quote: “Dillon Myers had a big week for us last week,” Edgewood coach Rick Carlson said. “We opened up against Geneva where he held the middle of the field for us although we lost a heartbreaker. He practiced hard, had a short memory and played a fantastic game for us against rival Conneaut last Thursday. Being away from our home field and starting at center midfielder, he held the middle of the field for us. We took a gamble pulling him out of the middle and moving him up top and he made us look really good. Making fantastic runs, communicating and coordinating the offense, he netted two goals for us. We ended up beating Conneaut 3-1 for the first time in many years. It was a team effort no doubt, but Dillon leading the way opened up the scoring and creativity.” 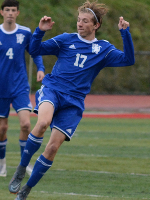 Name: Brandon Patton
School: Independence
Grade: 12
Stats: Scored four goals in a season-opening win over rival Cuyahoga Heights
Coach’s Quote: “It was good to see Brandon take over the game and finish his chances,” Independence coach Ryan MacRaild said. “It was nice to have him break the scoring early and get us on the board. Hopefully, he can continue to put the ball in the back of the net and work to assist others as well.” 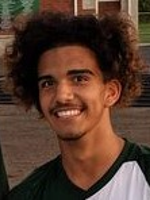 Name: Anexandel Rodriguez
School: Lakeside
Grade: 9
Stats: Played 160 minutes in two games while limiting opponents to just one goal
Coach’s Quote: “Anexandel has grown very quickly through his first three games of ever playing soccer,” Lakeside assistant coach Joseph Jury said. “He has been a reliable outside fullback with the speed and fitness to support the attack from the wing. We are very impressed with Anex’s continued work ethic and response to coaching and look forward to his continued growth and success this season.”

Name: Delaney David
School: Brooklyn
Grade: 9
Stats: Score six goals in two games—a hat trick in each
Coach’s Quote: “This smart and skillful freshman forward is definitely one of the reasons the Brooklyn Hurricanes soccer team has won its first three games and is playing well,” Brooklyn coach Alison Rafter said. “Although this is her first year as a varsity player, Delaney possesses skills that take some players years to develop. She is an unselfish player that will give up the ball when she sees an opportunity for others to shoot and score and has no problem taking on a defender one-on-one when appropriate to score herself.” 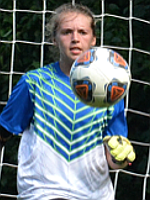 Name: Kaylee Lauriel
School: Wickliffe
Grade: 11
Stats: Recorded 42 saves and one clean sheet in three matches
Coach’s Quote: “Kaylee had a phenomenal week in goal,” Wickliffe coach Steve Gribovicz said. “She was tested in the Kirtland game multiple times to account for 15 saves while playing her line well to force misses wide and high of the goal. She followed up that performance with a clean sheet against Lutheran West where her quick decision making in goal spurred multiple attacks for our offense.” 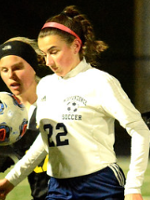 Name: Paige Westerburg
School: Independence
Grade: 11
Stats: Scored one goal with two assists in a pair of wins
Coach’s Quote: “Paige uses her top-end speed to consistently get past defenders,” Independence coach Bryan Less said. “Her goal against North Olmsted was caused by her ability to outrun the entire defense while dribbling. If we had finished at the goal better, she probably could have four or five assists already. Paige also uses her high soccer IQ to put together some beautiful combinations with teammates.” 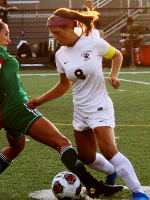 Name: Bailey Zanella
School: West Geauga
Grade: 11
Stats: Scored two goals in a 3-1 win over Mayfield and an assist in a 4-1 win over Holy Name
Coach’s Quote: “Bailey is a natural leader and one of the hardest workers on the field,” West Geauga coach Kori Jesenovec said. “She doesn’t accept anything less than 100-percent from herself and her teammates and this past week was a perfect demonstration of that.”

Name: Sammie DiBease
School: Perry
Grade: 10
Stats: Recorded 32 kills with 29 digs, 5 blocks and an ace
Coach’s Quote: “Sammie was instrumental in a comeback victory against North on Tuesday,” Perry coach Mike Fitzgerald said. “Sammie had 18 kills from the outside and 15 digs in that game. Sammie turned into a beast the final three sets securing Perry’s victory. Sammie continued her powerful attacks against Chardon on Friday with 14 kills. Sammie added a 100-percent serve percentage and 14 digs in the win at Chardon. Sammie can hit, serve and pass. She does her job and does it well.” 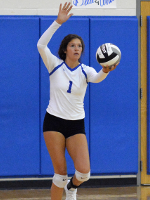 Name: Barbara Jackson
School: Grand Valley
Grade: 12
Stats: Recorded 57 kills, 46 digs, four aces and six blocks in three matches
Coach’s Quote: “Barbara is a strong player on the court and really understands what it takes to be a great volleyball player,” Grand Valley coach Anna Applebee said. “As a senior, she is a leader on and off the court and works hard every day. She never gives up and consistently shows up to win. Barbara is a wonderful young lady any coach would be thrilled to have on their team.” 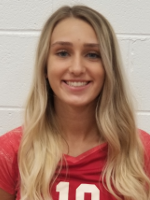 Name: Lauren Kucharski
School: Lutheran West
Grade: 11
Stats: Recorded 38 kills, 12 aces and 21 digs
Coach’s Quote: “This past week, Lauren led the team in all offensive categories and was second on the team with digs,” Lutheran West coach Jeff Schaef said. “As the team struggles to get their first win team captain Lauren is leading by example, both off the court and on the court, in her first year as a varsity six rotation player.” 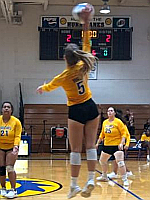 Name: Jaden Walz
School: Brooklyn
Grade: 12
Stats: Scored 31 points with 11 aces, 67 kills, 43 digs and 24 assists
Coach’s Quote: “Jaden Walz is starting off the 2019 season just as she finished 2018, as a true leader in our first four matches of the year,” Brooklyn coach Debbie Hall said. “She dominated in our win against Lutheran West, both offensively and defensively, as well as encouraged and kept up our momentum in a loss against Kirtland. She was also the driving force with our victories in our tri-match at home against Rhodes and Cleveland Central Catholic. Her natural skill and positive encouragement to all her teammates continues to show her leadership both on and off the court.”