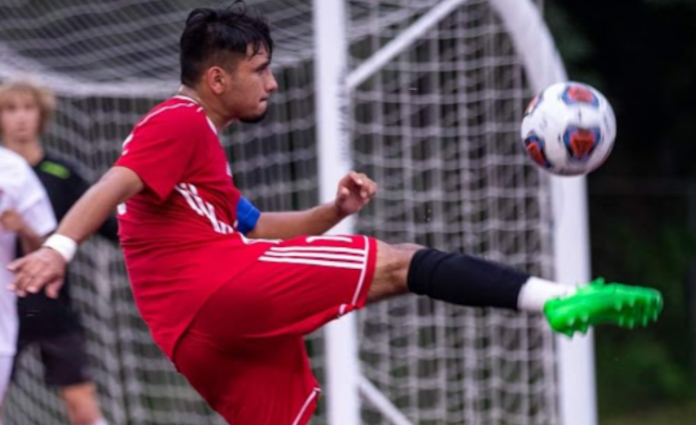 All statistics incurred during the week beginning Sept. 21 through Sept. 27. 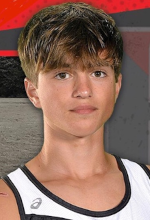 Name: Nick Garcia-Whitko
School: Hawken
Grade: 9
Stats: Placed 10th at the Riverside “Light up the Night” Invitational in 17:29
Coach’s Quote: “Nick has a natural talent for running,” Hawken coach Jess Lariccia said. “Each week, he has improved his time. He showed true grit on the race course all the way to the finish line. He is always striving to do his best for his teammates.” 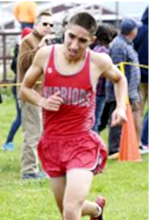 Name: Joey Jafarace
School: Edgewood
Grade: 12
Stats: Finished second at Riverside’s “Light Up the Night” Invitational with a personal-best time of 16:58
Coach’s Quote: “Joey has continued to grow as a runner,” Edgewood coach Steve Hill said. “He has put in a lot of miles this summer and has worked very hard to break 17 minutes. He has many goals this postseason and is moving in the right direction.” 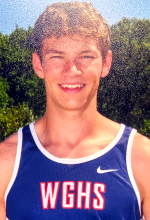 Name: Kenny Kirk
School: West Geauga
Grade: 12
Stats: Finished fifth at the Riverside “Light up the Night” Invitational in 17:16 to pace the team to a first-place finish
Coach’s Quote: “Kenny continues to be a consistent, dependable runner for the West Geauga cross country team,” West Geauga coach John Boylan said. “Although Kenny is quiet, he makes a statement every time he competes.” 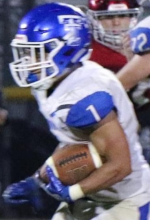 Name: Cael Brown
School: Trinity
Grade: 12
Stats: Ran 41 times for 262 yards and four touchdowns
Coach’s Quote: “Cael played an outstanding game against Crestwood,” Trinity coach Jeff McSweeney said. “He is not a ‘flashy’ player, but is a hard-nosed kid, who just keeps coming at you, play after play.” 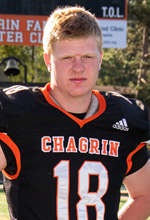 Name: Andrew Kirkpatrick
School: Chagrin Falls
Grade: 11
Stats: Averaged 44.0 yards on five punts with kicks of 50 and 51 yards and was 3-for-3 on point after try attempts and booted three kickoffs into the end zone
Coach’s Quote: “Andrew played a huge factor in our (overtime) win last Friday over Orange,” Chagrin Falls coach Mark Iammarino said. “He consistently flipped the field position with his punts and kickoffs.” 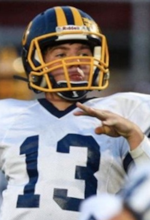 Name: Liam Powers
School: Kirtland
Grade: 12
Stats: Completed 8-of-10 passes for 89 yards and two touchdowns and ran for 121 yards on nine carries with one score
Coach’s Quote: “Liam’s performance helped us beat a team four divisions larger than us,” Kirtland coach Tiger LaVerde said. “He was fantastic rushing and passing the ball. He accounted for all three of our TDs.” 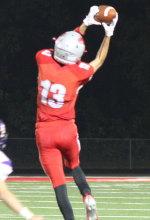 Name: Stone Zashin
School: Hawken
Grade: 12
Stats: Caught 13 passes for a school-record 197 yards and three touchdowns; his receptions were second-most in school history, which moved O.J. McDuffie into third place
Coach’s Quote: “In Stone’s second year of varsity football, he showed our team and himself what he is truly capable of,” Hawken coach Brian Stephenson said. “He made some tough catches that showed his athleticism and grit against a good team from Berkshire. His ability to use his 6-foot-4 frame to create separation and make plays in traffic is tremendous. I’m proud that he was able to see the fruits of his labors.” 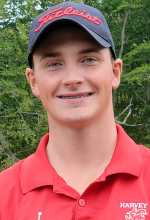 Name: Connor Hedrick
School: Harvey
Grade: 12
Stats: Shot an 80 to win medalist honors at the CVC tournament; and shot 39 and 40 to claim medalist honors in two other matches
Coach’s Quote: “Connor has been the No. 1 on our team for two years and he has been playing like it recently,” Harvey coach Scott Cummings said. “He has worked very hard on his game, and is improving on the mental aspect of the game also. We are pleased that it is starting to pay dividends for him.” 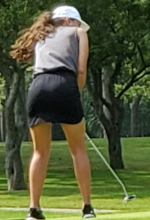 Name: Kaci Kanicki
School: Edgewood
Grade: 10
Stats: Tied for medalist honors with an 81 at the NEOGGCA tournament
Coach’s Quote: “Kaci has shown continued growth and consistency in her game as an individual and has helped her team to achieve personal team goals that they set for this season,” Edgewood coach Christina Fischer said. “Kaci earned medalist honors shooting a 90 at the CVC tournament and an 81 at the NEOGGCA tournament. She is a key leader for the team heading into the sectional tournament.” 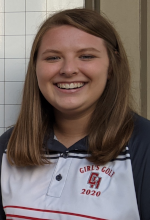 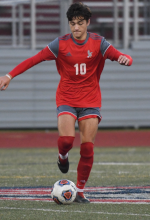 Name: Stefan Lechintan
School: Geneva
Grade: Scored six goals, including two game-winners, with two assists
Coach’s Quote: “We have had to ask Stefan to play many positions due to some injuries,” Geneva coach Jeff Hull said. “Now that we are starting to get healthy, he is able to play where he is comfortable and it really showed this week. The work he has been putting in since the beginning of the summer is really paying off.” 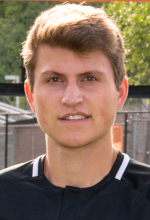 Name: J.T. Marting
School: Chagrin Falls
Grade: 12
Stats: Led a defense in three shutouts
Coach’s Quote: “J.T. has anchored the defense for these past two seasons,” Chagrin Falls coach Brian McKenna said. “This year, the Tigers have given up only one goal in nine contests. Equally impressive is that the defense is only allowing 2.3 shots on goal per game. Last week, J.T. helped to raise the shutout total to eight in the season with victories over Perry (2-0), Cuyahoga Falls (3-0), and Ontario (3-0).” 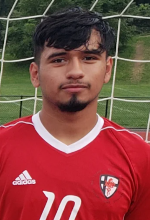 Name: Duilio Torres
School: Harvey
Grade: 12
Stats: Scored two goals with one assist in two games
Coach’s Quote: “Duilio Torres had another great week leading our team to two big wins over West Geauga and Lutheran West,” Harvey coach Natalie Sisler said. “Duilio’s ability to control the midfield defensively and provide scoring in key moments is essential to our continued team success. Duilio is a great leader and captain for the team. He has great field vision and reads the game at a very high level.” 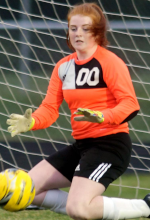 Name: Jeanelle Bryan
School: Lakeside
Grade: 11
Stats: Recorded two shutouts with 21 saves
Coach’s Quote: “Jeanelle had another strong week in goal, earning the two shutouts,” Lakeside coach Angelo Velotta said. “She has had several more on the season and is having a great year.” 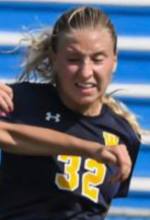 Name: Morgan Gabriel
School: Wickliffe
Grade: 12
Stats: Scored two goals with six assists
Coach’s Quote: “Morgan contributed two goals and six assists to help our team achieve a 2-0-0 week,” Wickliffe coach Steve Gribovicz said. “She was instrumental in moving the ball around with efficiency as we accumulated 11 team goals this week. Morgan continues to grow as a versatile and patient leader in our offense.” 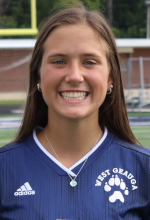 Name: Aubrey Zanella
School: West Geauga
Grade: 12
Stats: Helped the Wolverines secure two shutouts as a central defender
Coach’s Quote: “As one of our senior captains, Aubrey led her defensive unit with a clean sheet week against quality opponents in Aurora and Hawken,” West Geauga coach Kori Jesenovec said. “Her leadership and passion to help her teammates achieve great results every game can be seen in her dedication and willingness to do whatever it takes to keep opponents off the board.” 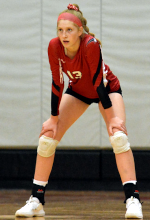 Name: Sammie DiBease
School: Perry
Grade: 11
Stats: Recorded 69 kills, 16 aces, 56 digs, 66 serves received and five blocks
Coach’s Quote: “Junior captain Sammie DiBease was an absolute beast this week on both offense and defense, as well as the serve line,” Perry coach Mike Fitzgerald said. “She recorded 69 kills and maintained a .476 hitting percentage in the week in 15 sets of volleyball. Sammie was instrumental in our 3-2 win against the previously undefeated Lakeside Dragons recording 18 kills, five aces and 24 digs. Sammie kept it going all week. Sammie also reached two milestones this week. She recorded both her 500th kill and 500th dig, all in just a season and a half.”