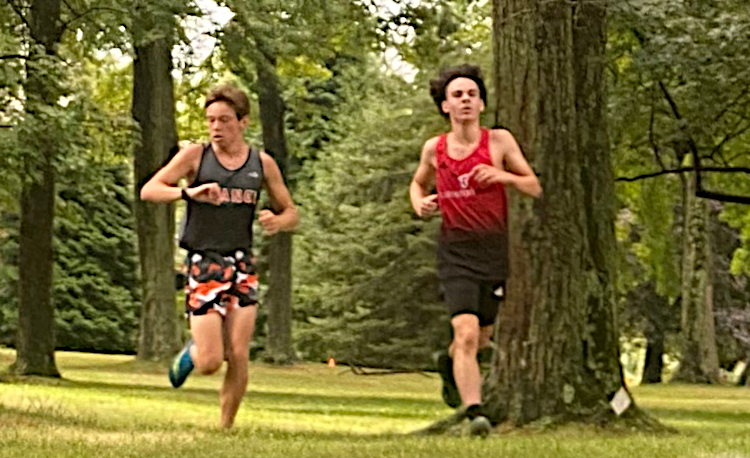 All statistics incurred during the week beginning Aug. 24 through Aug. 30.

Name: Brian Gent
School: Orange
Grade:
Stats: Finished second at the Gilmour Tri-Meet with a time of 19:30
Coach’s Quote: “Brian has worked consistently and diligently at building a strong running base since late May,” Orange coach Mark Genovese said. “He has been working very hard in his training and we are so very proud of his effort.”

Name: Sam Silva
School: Lutheran West
Grade: 11
Stats: Won the Gilmour Tri-Meet with a time of 19:24
Coach’s Quote: “Sam did a great job leading the whole team to a solid victory over both Gilmour and Orange,” Lutheran West coach Anjanette Whitman said. “He navigated a really tough course and it came down to the final kick for his first individual win.”

Name: Reilly Greenlee
School: Kirtland
Grade: 11
Stats: Won the Berkshire Early Bird Invitational with a time of 22:32
Coach’s Quote: “As Reilly stated in her interview after winning at Berkshire, her start to this season is a big confidence booster for her and opens her eyes to possibilities that could present themselves this season as she keeps training and racing,” Kirtland coach J.P. Moran said.

Name: Saivion Colbert
School: Lakeside
Grade: 12
Stats: Caught six passes for 119 yards and a touchdown and recorded seven assisted and one solo tackle on defense with a fumble recovery, forced fumble, two picks and a pass breakup
Coach’s Quote: “Saivion Colbert made multiple game-changing big plays on both sides of the ball in Saturday evening’s opener versus West Geauga,” Lakeside coach Buzz Edwards said. “He played nearly every snap of the football game. The 5-foot-10 two-way starter is a three-year starter and letter winner for the Dragons. Saivion is a three-sport athlete who also has multiple letters in varsity basketball and varsity track.”

Name: Chase Fortkamp
School: Wickliffe
Grade: 12
Stats: Carried 19 times for 203 yards with three touchdowns and also recorded 12 tackles on defense
Coach’s Quote: “Chase had a great game, as he was out leading rusher on offense,” Wickliffe coach Marce Porcello said. “He was dominant Friday night as he found the end zone three times. He is a captain and a leader on our football team.”

Name: Josh Norton
School: Chagrin Falls
Grade: 12
Stats: Recorded 11 tackles, including three for a loss, and caught two passes for 35 yards
Coach’s Quote: “This was Josh’s first football game in high school and he responded by making the consistent plays as well as the outstanding plays,” Chagrin Falls coach Mark Iammarino said. “He led the team in tackles and tackles for loss. He caught two big passes for first downs and blocked very well for an offense that had 234 rushing yards.”

Name: Kaci Kanicki
School: Edgewood
Grade: 10
Stats: Shot 43 to lead the team to its lowest score of the season
Coach’s Quote: “Sophomore Kaci Kanicki shot her lowest score in a match for her brief high school career,” Edgewood coach Christina Fischer said. “(She) led the way for the lowest team score for the current season at that time with a team score of 192.”

Name: Morgan Pascarella
School: Independence
Grade: 12
Stats: Recorded a 36, 37 and 38 in three matches
Coach’s Quote: “Morgan has had an amazing year,” Independence coach Karl Schuld said. “She puts in hours of time away from our practices to improve her game. Her putting and ability to scramble have made her one of the best players in our conference. Her average for the week of 37.3 helped lead our team to three wins.”

Name: Sam Webb
School: Lutheran West
Grade: 12
Stats: Won medalist honors in two of three matches with a school-record 32 against Independence
Coach’s Quote: “Sam has been playing very well the past two weeks and has been the key to the team’s 8-1 start,” Lutheran West coach Dave Ressler said. “Sam had six consecutive rounds of under 40 the past two weeks.”

Name: Casey McGhee
School: Independence
Grade: 11
Stats: Scored three goals with an assist in a rivalry win
Coach’s Quote: “Casey had a great season opener versus Cuyahoga Heights,” Independence coach Ryan MacRaild said. “He took advantage of scoring opportunities and then worked to create chances for his teammates. I’m looking forward to what he can do the rest of the season.”

Name: Jack Stauffer
School: Chagrin Falls
Grade: 12
Stats: Recorded three clean sheets in games against Gilmour, CVCA and Kenston
Coach’s Quote: “With the unusual circumstances we are playing in, we only had the chance to have two scrimmages, which were part of the three shutouts,” Chagrin Falls coach Brian McKenna said. “Against the typically state-ranked CVCA, Jack had an outstanding PK save. He followed that up with a save late in our first regular season game versus Aurora off a direct kick preserving a 1-0 victory. Through experience and instinct, he had a diving stop even though he was unable to see the ball come around his defensive wall.”

Name: Ty Vencill
School: Edgewood
Grade: 10
Stats: Recorded 10 saves in two matches
Coach’s Quote: “As a keeper, he had six crucial saves to keep us close in a CVC matchup against CVC and county rival Geneva,” Edgewood coach Rick Carlson said. “Although losing to Geneva 4-3 this week in our home opener, his commitment to his craft and unrivaled tenacity kept us in the match. He rebounded with four saves against county rival Conneaut, which he kept a clean sheet in a 4-0 win.”

Name: Delaney David
School: Brooklyn
Grade: 10
Stats: Scored four goals in two wins including her first hat trick
Coach’s Quote: “Although Delaney is only a sophomore, her level of play is far beyond her years,” Brooklyn coach Alison Rafter said. “She is a strong attacker who makes things happen due to her driven personality. As a member of this year’s leadership team, she leads by example by working hard in practices and in games. She encourages her teammates to do the same. Delaney is definitely a player who other teams definitely notice on the field due to her outstanding skill and tactical abilities.”

Name: Giovanna Farmer
School: Wickliffe
Grade: 11
Stats: Recorded 47 assists, 16 aces and 18 digs in her first two varsity games
Coach’s Quote: “Giovanna really gets in the zone when it becomes game time,” Wickliffe coach Anthony Mezacapa said. “Off the court, she is so much fun to be around and has such a positive outlook on life; the second she steps on the court, she is focused. She always gives 110-percent and it shows. Her sets are great. She knows she has to get better at defense so she stays after practice to work on it. This girl is going to have an awesome year. I cannot wait to help her grow.”

Name: Lehlah Jackson
School: Brooklyn
Grade: 12
Stats: Recorded 11 digs, five kills and two aces in a win over Oberlin
Coach’s Quote: “Senior Lehlah Jackson was a pivotal reason we won our match against Oberlin,” Brooklyn coach Debbie Hall said. “She never left the court and played a great defensive game. She may not be the tallest hitter we have but she is a force to be reckoned with.”