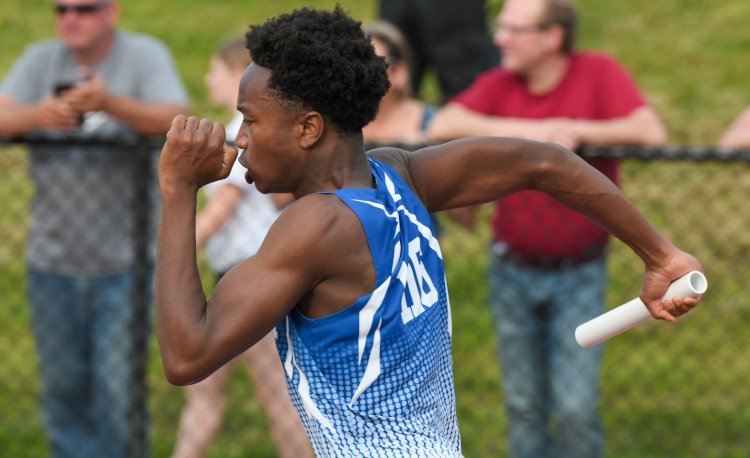 The Blue Devils won the girls’ competition with 105 ½ points. Cardinal finished second with 76. Kirtland scored 49 points to place fifth and Cuyahoga Heights was sixth with 45.

Independence also defended its district title in the boys’ competition. The Blue Devils finished with 104 points while Cuyahoga Heights was second with 76.

Independence’s Emmett Stralka won three district crowns and placed among the top four in another.

He set a new school record in winning the 100-meter dash in 10.85 seconds and he anchored the 4×100-meter relay team to first place with a meet record time of 44.10. Lucas Martinez, Jack Taliaferro, and Deston Boscarelli also ran in that event.

Stralka teamed up with Taliaferro, Kyle Zygmunt, and Martinez to win the 4×200 in 1:30.51. He also earned a regional berth in the 200 as he finished second to defending state champion Amere Talley of Lutheran East with a time of 22.28.

Leichliter also advanced to the regional meet in the 300-meter hurdles and pole vault. She finished fourth in the 300 hurdles with a time of 50.54 seconds and she was the runner-up in the pole vault after clearing 7-feet, 6-inches.

Adams was the runner-up in the high jump (5-0) and finished third in the 200-meter dash with a time of 27.04. She will compete in the regional meet in both events.

She cleared 8-feet to win the event and then she set the bar at 8-7 to try to beat the previous record of 8-6.

“I’ve had a great senior year with the help of my teammates and coaches,” Waldo said. “I’m looking forward to competing again in the regional meet this year and I’m hoping I only continue to improve.”

Waldo also advanced to the regional meet in the long jump with her fourth-place finish. Her best jump was 15-feet, 7-inches.

Cardinal’s Lily Ayer won the 800-meter run in 2:26.56, a new personal record, and also anchored the 4×400-meter relay team which won the district title with a time of 4:15.60. Carly Ayer, Karalyn Rutkowski, and Lauren Soltis also ran in that event.

Ayer also qualified for the regional meet in the 4×200-meter relay. She teamed up with Ronee Collins, Soltis, and Carly Ayer to finish fourth in 1:52.08.

Cardinal’s Mike Soltis won the shot put with a best toss of 52-feet, 2 ½-inches. He’ll also compete in the discus at the regional meet after placing fourth with a best throw of 126-feet, 3-inches.

Cuyahoga Heights had a pair of district champions in Bradyn Rusch and Jack Klamert.

Kirtland’s team of Alyssa Bryll, Elin Connor, Marissa Carmosino, and Macy McIntosh placed third in 1:52. The Hornets also placed second in the 4×800 with a time of 10:49.13. Ainsley Borthwick, Reilly Greenlee, Kuczkowski, and Vosicky competed in that event.

Independence’s team of Nowak, Kate Coljohn, Madelyn Flynn, and Gabby McGreevy placed fourth in the 4×800 with a time of 11:06.15.

Independence’s 4×400-meter relay team is headed to the regional meet after it placed second with a time of 3:31.05.