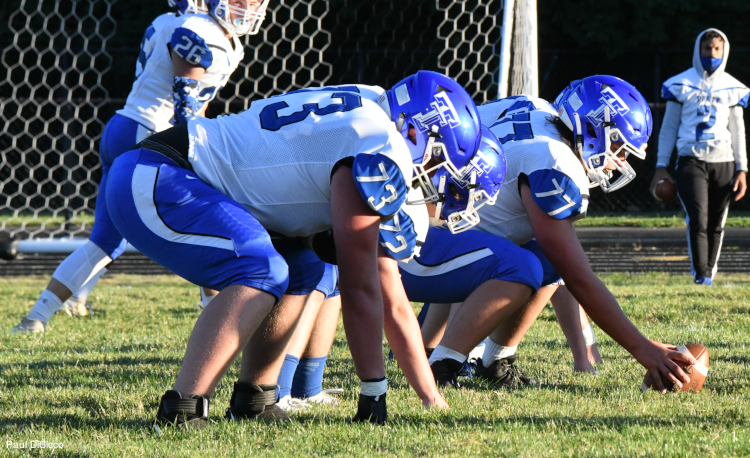 Beachwood, Chagrin Falls and Trinity each won their first-round games and will play in the second round next weekend.

The Bison won in the postseason for the first time in school history.

Beachwood scored 21 unanswered points in the second quarter to pull away from visiting Grand Valley in a 41-12 win on Saturday.

Desmond Horne, Jr. opened the scoring for the Bison with a 25-yard run in the first quarter. Grand Valley responded with a Nathan Boiarski 65-yard scamper. Grand Valley missed the extra point, leaving Beachwood ahead, 7-6.

Minter added two second-half touchdown runs and Grand Valley scored on a 40-yard pass to close out the scoring.

Minter ran for a game-high 127 yards on 16 carries and he also completed 8-of-12 passes for 63 yards. Boiarski led the Mustangs with 106 rushing yards on 12 carries.

Beachwood will host Warrensville Heights in a second-round game on Saturday.

Chagrin Falls advanced in the postseason for the first time since 2013 with a 56-6 win over league rival Hawken.

Early turnovers gave the Tigers an early lead and they never looked back.

Dawson Pierce threw a touchdown pass to Josh Norton to convert the first Hawken miscue into points and Donny Hardy ran for a 53-yard touchdown following the second take away to make it 14-0.

Hawken’s A.J. Sands made a diving touchdown grab to break up the Chagrin Falls scoring run but the Tigers responded with touchdown runs from Cam O’Connor, Xavier Perez, Hardy and another from O’Connor to take a 42-6 lead.

The Tigers advanced to play at Mogadore Field on Saturday.

Trinity picked up its first postseason win since the Trojans captured the state title in 1980.

Anderson hooked up with Jack Maloney on an early touchdown pass but Rittman responded to even up the score.

The Trojans scored the final 18 points of the game, which included a Caleb Moss 60-yard scoring run in the second half.

Trinity hosts Louisville St. Thomas Aquinas in the second round.

Crestwood received a forfeit from Warren Champion and will play in the second round at Sugarcreek Garaway on Saturday.

Berkshire came up short against a potent Lutheran East team.

The Badgers nearly matched the Falcons point for point until late in the game as Lutheran East pulled out a 58-35 win.

Berkshire jumped out to an 8-0 lead when Jacob Brown scored on a five-yard run and then threw a two-point conversion.

Lutheran East scored on two big plays—a 69 and a 94-yard run—and added a 14-yard scoring play to pull ahead.

Brown got the Badgers back into the game with a seven-yard touchdown run but again big plays led to Falcon touchdowns. Lutheran East completed touchdown passes of 47 and 41 yards to regain control of the game.

Again, the Falcons responded, this time with a 26-yard touchdown run.

Josh Tribuzzo caught a 25-yard touchdown pass to pull Berkshire to within 44-35 but Lutheran East scored on a seven-yard pass and a 95-yard interception return to close out the game.

Other CVC scores from Saturday: