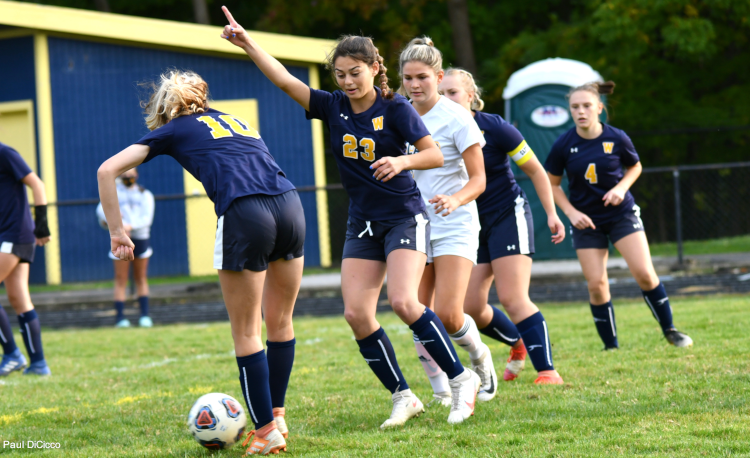 Massey Andrykovitch and Morgan Gabriel each scored a goal as Wickliffe slipped past visiting Brooklyn on Saturday, 2-0.

“This is a big win for us going into playoff seeding and finishing up our conference play with a 4-1-1 record,” Wickliffe coach Steve Gribovicz said.

After several momentum swings, Andrykovitch scored off of an assist from Gabriel in the first half to settle down the Blue Devils.

“Our first goal scored by Massey Andrykovitch was a momentum changer as it was back and forth play up to that point,” Gribovicz said. “Morgan Gabriel played a beautiful ball up the middle for Massey to run on to and the keeper was able to stop the initial shot, but Massey followed through the run and was able to touch the deflected save into the net.”

That goal held until the second half when Gabriel punched one in off a setup from Eliza Wills.

“Morgan gained possession and showed her shiftiness by dribbling past a relentless defender and maneuvering from right sideline to center and slotted the ball into the far post netting,” Gribovicz said.

Defensively, the Blue Devils and keeper Kaylee Lauriel recorded their fourth shutout of the season.

“Kaylee Lauriel and the defense preserved the team’s fourth shutout of the season with aggressive play in the back when under duress,” Gribovicz said.