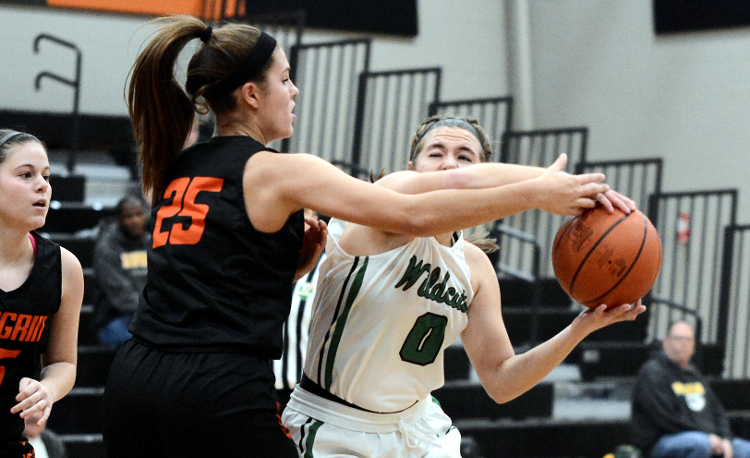 Kirtland opened the day with a 45-42 win over Chardon.

The undersized Hornets used a tenacious defense and persistence to come from behind to beat the much bigger Hilltoppers.

“This was a team effort,” Kirtland coach Brittany Zele said. “Even those who didn’t play as much, they worked hard against each other in every practice to make their teammates better. Macy McIntosh, who is a solid 5-foot-5 if we’re being generous, was up against Chardon’s tallest girls most of the game and her strength showed. Amber Yurick was in the same situation going against their bigs. Even though she got in foul trouble, she came up with key steals, rebounds and deflections. On the other side, Julia (Camino) came through with a solid 11 points to lead our team. It was nice to see her attack and take control. Leah LaVerde came off the bench and made a huge impact with some quick buckets. Lauren Snyder led the team in steals and gave us steady scoring throughout the game.”

The difference for the Hornets came in the final two minutes when they pulled down three offensive rebounds on missed free throws to extend possessions.

“Give them credit, they played hard. They were physical and they made shots when it mattered,” Chardon coach Cullen Harris said of the Hornets. “It was a three-point game and they got three straight offensive rebounds at the free throw line and we outsized them at every position. Offensive rebounding is want. Offensive rebounding is desire. It’s not always about size and skill. It’s about want and they wanted it a little bit more and that’s what it came down to.”

The Hornets converted on 10 of 15 free throws down the stretch while the Hilltoppers went to the line just three times in the fourth quarter.

“I am a big believer in taking advantage of free points and looking at stats from last year and what we saw in the preseason, this was something we needed to focus on and we have,” Zele said. “This team truly believes in one another and that’s why when we needed to hit those free throws; they delivered.”

Independence gave the CVC a 2-0 advantage when the Blue Devils topped Brush in the second game, 51-47.

Trailing 40-36 entering the fourth quarter, the Blue Devils went on to outscore the Arcs in the final eight minutes, 15-7.

“Down the stretch in one of our time outs, we talked about how we couldn’t lose our composure,” Independence coach Mike Marcinko said. “It was getting a little chippy out there. We told them not to lose their composure and do what they were supposed to do and get the ball to the ball-handlers and we’d run our stuff. Kudos to our girls for getting in our motion and getting in our delay and getting to the free throw line, all the things we needed to do on the fly to take care of a solid team.”

The Blue Devils, who improved to 2-0 after a 56-32 win at Columbia on Friday, showed some signs of fatigue early in the game as the Arcs started to pull away in the second quarter.

“We were exhausted, but no excuses,” Marcinko said. “We were tired and we knew this was going to be up and down and chaotic. We told the girls, you can make all the excuses you want, they’re long and athletic and it’s going to be chaotic and fast; they don’t care. We kept pounding home that we think we’re the better group, not individuals, we’re the better group. If we stick together and do what we’re supposed to do we’ll be in the game. For the most part, we did that.”

The Arcs slowly put together a second-quarter run that saw them build a 20-14 lead with just three minutes remaining in the half.

That’s when Haley Dmitruk found her stroke and buried three of her four 3-pointers to keep the Blue Devils within reach at halftime, 28-26.

“She didn’t have a great shooting night on Friday night,” Marcinko said. “It was simple stuff, elbow in and hand under the ball, nothing extravagant. She came today and was working on it. Fruits of her labor; she turns around and nails clutch threes for us. That kept us in the game because the rest of it wasn’t exactly going our way.”

Chagrin Falls used a stifling defense to beat Mayfield in the third game, 32-28.

The Tigers held the Wildcats scoreless in the first quarter as they built a 7-0 advantage. Mayfield responded with an 18-10 run in the second quarter to take a one-point lead into the break.

Chagrin Falls allowed just 10 points in the second half.

“It’s no secret that we really like defense and we were locked down on them in that first quarter,” Chagrin Falls coach Brittany Anderson said. “They started to find a couple of open players off that cut through our zone and they were knocking down shots. OK, you make adjustments, you change up how you’re playing your defense up a little bit and try to get more rebounders down there and more people low to jam some cutters. They did a really good job adjusting their offense and finding some open opportunities and we had to adjust to that.

Leading 26-23 with 3:42 left, Carolyn Bencko drained a 3-pointer to give the Tigers the biggest lead of the game. She hit another 55 seconds later to extend Chagrin’s 10-point run.

Bencko finished with a game-high 13 points.

“That’s huge; that’s persistence,” Anderson said. “It was a struggle with her playing point guard and having so much pressure up top. It gets really frustrating because you’re the one trying to run the offense and get people going. She was finally able to have an opportunity when the ball swung around to her to knock down shots when we needed it most. That was senior leadership right there.”

Bencko also recorded a key block with a minute left after the Wildcats had pulled to within five.

Bella Dalessandro added nine points for the Tigers with seven of them coming from the free throw line. Julia Santamaria and Lily Karyo each contributed with four and Molly Barr was the only other Tiger to score. She finished with two points.

“Our offense, we had a lot of really good looks in the first quarter that didn’t drop and then they cranked it up with that full-court pressure and we had trouble handling it,” Anderson said. “It ended up being a tough game down the stretch. I give them credit, they didn’t back down, but it felt like the cap was over the hoop for them.”

With Chagrin Falls’ win, the CVC took a 3-0 lead into the final game of the night.

“The CVC is tough,” Anderson said. “We’ve got some small schools in there but we can hang with some of the big dogs. It’s nice to be able to come out to this event and showcase what we have. It’s fantastic to watch your peers do well against another conference.”

Host Eastlake North prevented the CVC from sweeping the event.

The Rangers built an early double-digit lead and never looked back as they went on to win 68-37.

Orange’s Kaydan Lawson did her best to keep the Lions in the game as she scored 10 of her 14 points in the first half.

Mahogany Sanford led the Lions with 19 points, with 10 of those coming in the fourth quarter.

Next season, the event will be hosted by a CVC school.